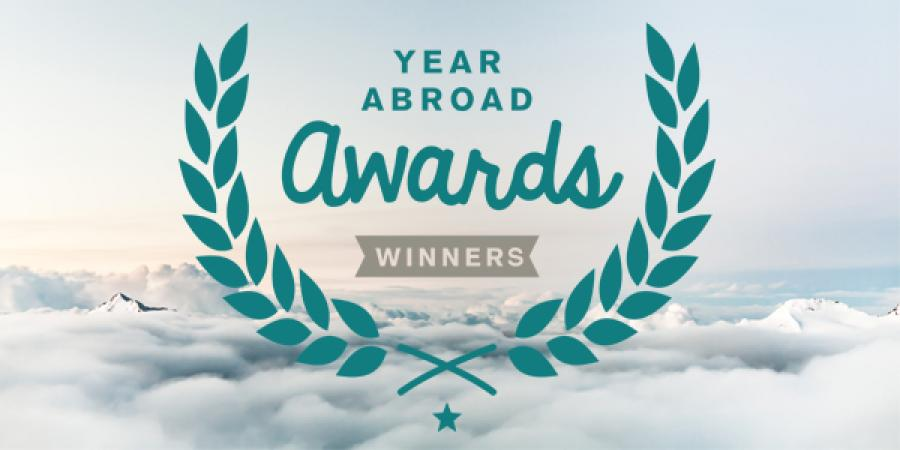 This article was written by Global Graduates, published on 14th June 2015 and has been read 16623 times.

The Year Abroad Awards are designed to celebrate and reward UK students who have spent time working, studying or volunteering abroad during their degree. The ten categories have been carefully selected to showcase the qualities that epitomise a year abroad student - creativity, bravery, ingenuity, a global mindset and a sense of humour! Here are the winners....

Eligibility
To enter the Year Abroad Awards, you must be a student at a UK university (or have graduated from a UK university within the past year) and have spent up to a year studying, working or volunteering abroad during your degree. Please check out our FAQs and T&Cs for more information about the Awards, and scroll down to read more and enter.

1. The Blogging Award for Best Documentation of Adventures

Are you an avid year abroad blogger? Now's the time to get your hard work recognised!

2. The Photography Award for the Photo of the Year

Budding Mario Testino or Steve McCurry? We want to hear from you! Send us the most brilliant photograph from your year abroad to be in with a chance of winning great prizes from Blurb - the greatest photo book-making tool out there!

View all the Finalists!

3. The Videography Award for the Film of the Year

If you have footage of your year abroad, we want to see it! Give us a taste of your time abroad in 3 minutes to be in with a chance of winning!

She says, "I spent the first half of my year abroad (2013-14) studying at La Universidad de Murcia in Murcia, Spain, and the second half volunteering for the Two Brothers Foundation in the favela of Rocinha, Rio de Janeiro, Brazil. The video also includes some clips of trips I made to other countries during my time abroad, including France, Canada, Morocco, north east Brazil, Macedonia, Italy, Argentina (Cataratas del Iguazú) and Paraguay."

4. The Entrepreneurial Award for the Best Startup Idea

Has spending time abroad allowed you to come up with the next big thing? Share your business model with us and our panel of young entrepreneurs will put it to the test!

The Prize: Startup support from our network!
The Winners: TOM CHARMAN and OLIVIA HIGGS from the University of Exeter, the founders of the app Kompas which they started on their year abroad studying at Ludwig Maximilians Universität in Munich.

Check out their winning business!

5. The Students' Choice Award for the Most Outstanding University Advisor

Did your study abroad advisor support you through the tricky process of moving abroad? Why not give their hard work some recognition by nominating them for this award!

The Prize: £50 RyanAir voucher!
The Winner: NINON TALOTÉ, Placement Officer at the University of Bath, nominated by Sarah:

"In her first year of work at the university, the young Ms. Taloté took on a difficult role right in the middle of the students leaving for their placements. She had little background knowledge of each student yet she took on the role with confidence and open arms. As soon as I had difficulty at my first placement, I contacted her and she was so supportive over the phone. She made it clear she was available at all times to talk and she would check up on me regularly. She gave good advice but listened well to how I felt and what I was going through. She rang or emailed me daily to check how it was all going-even though she had another 40 students to check up on all around the globe as well as the 40 in the year below that were applying for jobs for the upcoming year. When I was leaving with no notice from my first 6-month placement, she called and said she could come and see me if I needed it, but I felt I should do this on my own in order to learn and grow from it better. When she found out my first placement supervisor lied and bad-mouthed me to my next placement before I started, she was quite angry and rang them up to explain the situation and calm it. I felt 100% supported and I think I would have had a break down had she not been this good. She visited me half way through my next placement and had a chat with my supervisor in the room and also with me alone to make sure I was OK. She is very professional, always gets back to me when she promises to do and is always very calm and collected in what must be stressful situations for her too. Especially as it was her first few months and she is so young! I am so happy that she stepped into the position that was held by someone not even half as supportive previously. On top of all that, she is French so English isn't her first language but she took on the emotional self that I was with confidence and a lot of kindness."

6. The Adversity Award for the Most Inspirational Student

The year abroad is never smooth sailing, but for some people it can be a serious challenge. If you or someone you know has overcome a year abroad obstacle (whether it's losing a job or dealing with depression), get in touch and tell us you/their story.

The Winner: EMMA FINDLAY WILSON, studying English Literature and Italian Language at Cardiff University, with a year abroad as a Language Student in Varese:

"It seems a tiny thing, but to me my homecoming this July was a triumph over my past self. The year, and particularly six months, before I left for Italy were extremely difficult for me. I had struggled with severe anxiety and some depression, leading to episodes of self-harm and a very unstable state. I found it hard to relate to my friends and family, or even to explain what I was going through, particularly as they dismissed it as over-emotionality. Particularly difficult was an anxiety I developed specific to traveling, especially by public transport. Taking a bus or a train, instead of an everyday thing, became a terrifying ordeal that usually resulted in tears or a panic attack. I was constantly finding excuses to stay at home or get lifts anywhere, and became nervous even at the mention of trains. The knowledge that I would have to fly to Italy by myself and be completely alone in a foreign country absolutely petrified me, and the knowledge that I would be relying solely on my somewhat limited grasp of the language when it came to using public transport was even worse. My flight over in September was not enjoyable to say the least, and my first few weeks there were also traumatic, though I did have relations nearby who helped me settle in. Gradually, however, things began to improve. I used the bus for the first time in months, and didn’t cry or break down. I began to visit friends and other relations further afield, and realised that instead of being a horrible experience, traveling was a chance for me to be independent, to spread my wings. As I saw more of the beautiful variety of cities throughout Italy, I fell in love with the country, and my anxiety and constant emotional imbalances started to disappear. It wasn’t an immediate process — it never is — but by the time my year was officially up, I was a different person. My Italian has hugely improved, to the point where sometimes I even feel more comfortable using it than English, and I’m far more confident in myself than I have been for years. Not only that, but I’m happier. Coming from the cliché small town (with no train station!) and all-girls’ boarding school, I’d never had a chance to really be independent. Now I really know how to be self-sufficient, and I know that I can rely on myself to be okay even when no one is there to help me. I culminated my Erasmus year with a trip that took in Turin, Pisa, Bologna, Como, and Rome, and the gorgeous sights and wonderful experiences will stay with me forever — a reminder that I am a far stronger person than I ever thought I could be this time last year."

7. Year Abroad Yarn Award for the Most Brilliant Anecdote

Everyone has a year abroad story that they love to tell. Whether hilarious, moving, unbelievable or just plain embarrassing, we want to hear yours! Tell us your best year abroad anecdote in 500 words or less to be in with a chance of winning.

The Prize: Your yarn will be published on the Universities UK International Unit website and you have the chance to present on a student panel at the 2016 Go International conference.
The Winner: for "My Feisty Bilingual Tongue" is MAISIE PRIOR who is studying Spanish at Bangor University. Highly Commended: for "The Stranger" is YASMIN OMAR who is studying French and Spanish at Cambridge University.

8. The Universities' Choice Award for the Most Transformed Student

No one is the same after a year abroad, but some people change more than others (and we're not just talking about regrettable haircuts). Universities will nominate final year students or recent graduates who studied/worked abroad during their degree, and in whom the staff member has noticed positive changes.

The prize: £100 RyanAir vouchers!
The winner: RAE-ELLEN COLLINS, nominated by the Senior Lecturer in French and Academic Placement Officer for France at Sheffield Hallam University.

9. The Travel Writer Award for the Best Mole Diary

Our hugely popular Mole Diaries provide a fantastic insight into life in cities across the world. Whilst they're all brilliant, we've decided to pick a Mole Diary to crown them all! Whether your Mole Diary is already up on the site or you're writing one from scratch, send in your entries!

The Prize: £50 RyanAir vouchers!
The Winner: CHARLOTTE DARRELL from Durham University for her brilliant insider guide to Muscat, Oman.
Sponsored by:

How to decide what to do on your international placement

How to manage money on your year abroad