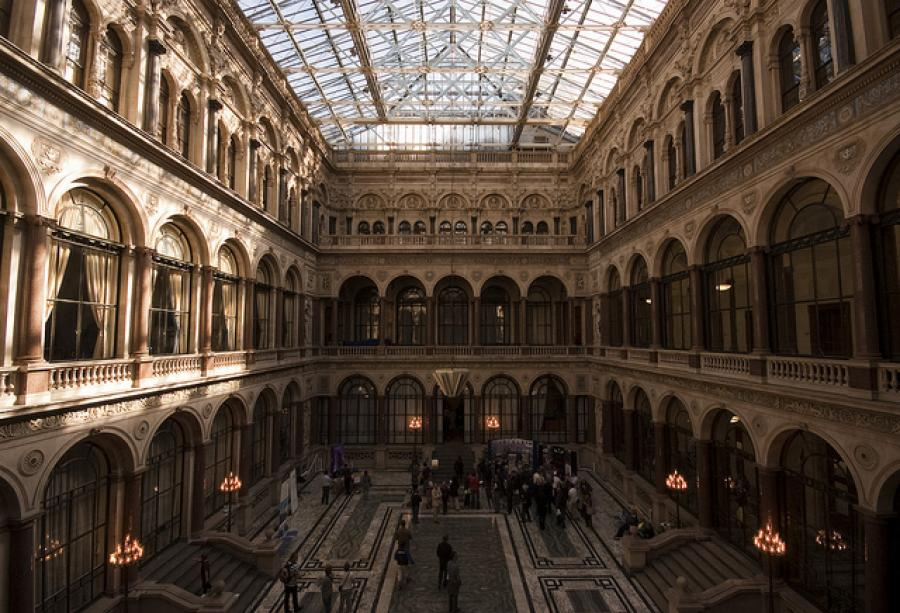 This article was written by Global Graduates, published on 30th January 2015 and has been read 5203 times.

Florence discusses why lesser-taught languages such as Arabic and Mandarin are not just useful life skills, but are crucial to the future of the UK.

On 28th January 2015, the APPG on Modern Languages met in the House of Lords to discuss the strategic need for lesser-taught languages. Baroness Coussins, who was chairing the meeting, explained that a number of the usual parliamentarians were unable to attend, as (somewhat ironically) the APPG clashed with a debate on the Counter-Terrorism and Security Bill. However, what the meeting lacked in MPs, it more than made up for in spirited debate.

The meeting began with a discussion of the linguistic needs of GCHQ, which currently employs around 300 linguists. It is fascinating how the rise and fall in demand for particular languages corresponds with oscillating world powers and crises areas - for example, GCHQ is currently in dire need of Russian and Mandarin Chinese graduates, indicating a real urgency to secure Britain’s diplomatic and commercial relationships with Russia and China. As the world changes, GCHQ has to act accordingly. Language skills are a crucial part of their ability to do this.

To a certain extent, government agencies are able to anticipate the gradual increase and decline of certain languages and can thus put structures in place to make sure that their future needs are met. However, the sharp decline in school-age linguists has led to a significantly reduced recruitment pool for GCHQ, which is then limited even further by the restrictions placed on applicants (in order to have a career at GCHQ, you must be a UK national and possess strong analytical skills, as well as being linguistically gifted). For this reason, GCHQ targets specific universities and language graduates in order to find the perfect candidates, tending to avoid combined studies students, as they believe this waters down language skills.

According to the Head of Languages at GCHQ, government agencies could fulfil their security requirements far more easily if there was more robust support for languages (and marginalised languages in particular) in schools and universities.

This sentiment was echoed by the Deputy Ambassador to China, Martyn Roper, who believes languages to be of vital importance in international diplomacy. Having studied French, German, Latin and Russian at school, he since has learnt French and Brazilian Portuguese with the Foreign Office, and is in the process of learning Arabic, Farsi and Mandarin.

In his role as Ambassador to Algeria, he quickly learnt the value of speaking the local language; on arriving in Algeria as a new Ambassador, you are given an hour with the Algerian President to present your ideas, a meeting which is unquestionably more productive when you can speak to the President in his own language. Recalling the Algerian terrorism crisis of 2013, Roper emphasised how language skills in a diplomatic situation are not just a convenient shortcut to securing international relationships - in difficult circumstances, they can be a matter of life and death.

The purpose-built language centre in the heart of the Foreign Office is a testimony to the seriousness of the dearth in multilingual Brits. With 650 designated overseas posts for linguists, (who, amongst their other duties, act as interpreters for British companies abroad), a long-term dip in language graduates could lead the UK into diplomatic and commercial crisis.

Arabic, Russian, French, Spanish and Mandarin are currently the highest priority languages for the Foreign Office. According to Roper, ‘the UK has an historic opportunity to work with China over the next five to ten years and it’s crucial that we take advantage of it.’ Without linguists who are not only fluent in Mandarin, but who also have a knowledge of the culture and correct trading practices, we will be in real danger of losing our status as one of the world’s leading economic powers.

Dr Elisabeth Kendall, Senior Research Fellow in Arabic and Islamic Studies at Pembroke College, Oxford, emphasised the key role Arabic is playing - and will continue to play - in world politics. Arabic is the fifth most widely spoken language in the world and the population is rapidly expanding (about 40% of native Arabic speakers are under fourteen years old). Yet, despite this worldwide dominance, Arabic is only taught at 16 British universities, whilst German (the eleventh most widely spoken language) is taught at 54. An understanding of Arabic is crucial to a safe and peaceful world and our refusal to engage with the nuances of the language is already hindering political progress.

Our inability to communicate directly with the Arab world is, at best, limiting and, at worst, dangerous. Professional translation agencies often regurgitate the same information and sources, providing a skewed and blinkered picture of what’s happening in the world. In rural Yemen, for example, the literacy rate is very low and ideas are shared orally through poetry, rather than through print. Focusing on translating newspaper headlines, then, means that we miss crucial information, resulting in a lack of real cultural understanding.

So, why are we producing so few Arabic speakers? Our focus should be on quality over quantity, argued Dr Kendall. Whilst the demand to study Arabic at university is still relatively high, curriculums vary widely and students (along with many of their tutors) are not properly informed about what kind of Arabic they’re actually learning. This leads to recently graduated students realising that they’ve been taught the classical Arabic of religious texts, for example, rather than the modern Arabic of the media, or one of the many local dialects.

This lack of linguistic awareness can cause real problems in a practical context. After the events of 9/11, the US military taught Arabic to members of the armed forces before sending them to Iraq. Only when they tried to speak to civilians did the soldiers discover that they’d actually been trained in Egyptian. Their newfound ‘language skills’ were completely useless in the context for which they were intended.

Another issue facing Arabic students is the difficulty of finding somewhere to spend their year abroad. With the Middle East in widespread political turmoil, it is almost impossible for UK universities to identify a safe year abroad destination for their students. Dr Kendall admitted to having to pull students out of Egypt, Beirut and Damascus in the last couple of years after political crises led to extreme violence in the streets. With no sign of the unrest in the Middle East abating, Arabic students are in danger of losing the chance to practice their language skills with native speakers, something which is of vital importance in creating linguists of the level required by GCHQ and the Foreign Office.

How do we overcome the obstacles facing lesser-taught languages? One speaker had a controversial suggestion: that we teach Arabic in primary schools, catching young people before their prejudices have been formed and using the language to educate them about another culture. This would also allow Muslim children to learn conversational Arabic in a safe, secular environment alongside their classmates, rather than having to go to their local mosque to practice the language.

This is undoubtedly a bold and interesting idea, one that has the potential to transform the way Muslims are viewed in the UK. Whether it is the correct path, however, is yet to be debated. What is certain, though, is that without a coherent strategy to improve the language skills of British citizens, the UK will never play more than a bit-part on the global stage.

Have you got the (foreign) X-Factor?