Home Articles Why going out with a local didn't help my Spanish (and the tips that did!)
Share
Tweet
Write for us 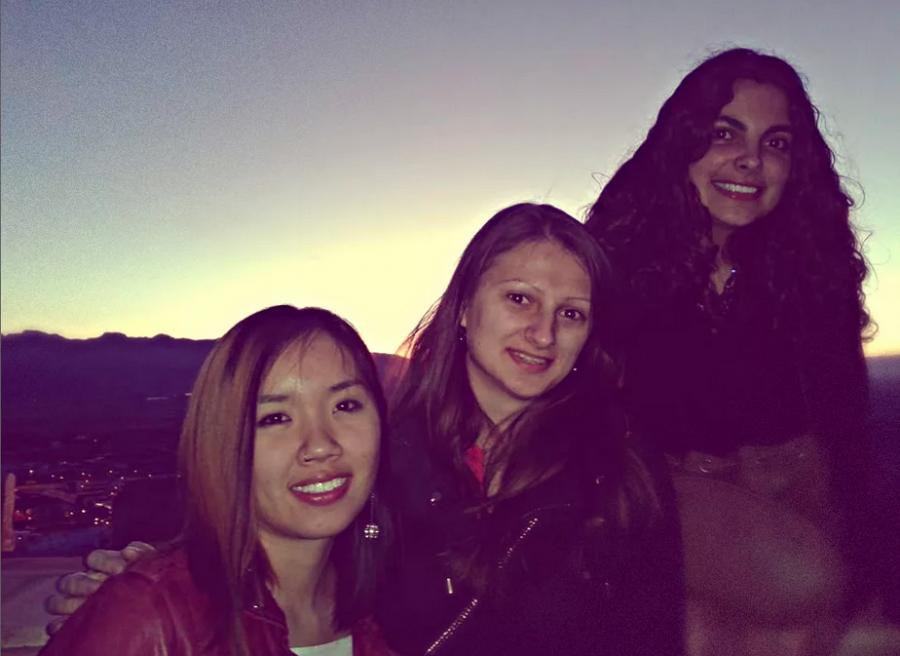 by Jess with her students

This article was written by Jess Bess, published on 7th August 2015 and has been read 5670 times.

To learn a language, they say the best way is to go to the country of your target language and to immerse yourself in the culture. The year abroad presents a perfect opportunity for this if you're studying a language or maybe you're just interested in other cultures and want to integrate into the local life.

Either way, before going to Spain I was really keen on doing both to really most the most out of my experience. Living with locals, hanging out with locals, everything with locals! Who knew that I’d actually end up going out with a local – not that it helped my Spanish in any way. However in this post, I’ll be giving advice on how to improve your Spanish in a fun way and no, not through grammar exercises. (Unless that’s your idea of fun?) But first, let’s begin with the sweet and sour of learning Spanish on your year abroad.

You’re in SPAIN! The land of sun, seafood paella and siestas. No need to go to language exchanges in the UK just to find a Spanish person to converse with. Spanish people are everywhere in Spain and there are unlimited opportunities to practise the language. Spanish people are friendly folks, they don’t bite so whenever you get any opportunity to engage with a local, do it.

When you move to Spain, you’ll find that in your flat, people from other floors will say ‘Hola’ to you when you meet along the hallway or if you’re just walking down the stairs and bump into them. Perfect opportunity to engage with people or in my case, just to smile and nod when a cute old man mutters something incomprehensible to your English ears.

Everything is in the local language and there's no way of avoiding it whether you like it or not. You're bound to pick up something. For example the TV, radio, sign posts, metro signs etc. So you’re gonna have to learn Spanish or be screwed.

A good tip is to watch a local TV programme such as La que se avecina with Spanish subtitles to pick up the slang. With the subtitles you can jot down the slang in a notebook and then search it up later. It’s how I learnt phrases such as echar un polvo and no it doesn’t mean to throw dust – I won’t go into graphic detail so search it up yourself.

Another advantage is that unlike countries such as Germany and Denmark, the level of English in Spain is pretty low so most people will want to speak to you in Spanish rather than English. Perfect for practising your Spanish.

You’ve just arrived in Spain and you’ve realised that you don’t know Spanish para nada. No one understands you and you don’t understand anyone either. ‘Wait, have I come to the right country?', you ask yourself but then you recognise ‘El Corte Ingles’ from your Spanish textbook and let out a sigh of relief.

Not to worry, there’s certain things they don’t and can’t teach in textbooks at university and that’s the whole point of your year abroad. Your Spanish will improve more than ever before, especially oral fluency and listening. Well for beginners this is certainly true. However for those intermediate learners of the language you might not improve, or as much as you initially hoped. Speaking from personal experience, it is hard to integrate into the local culture and to be really close friends with native speakers to really pick up on your Spanish.

Even if you live with Spanish people, (which may or may not be that case since many live in the towns) they return to their towns on the weekends leaving you lonely and bored in your flat. At the same time, locals don't have as much free time to go out or to sightsee since their current studies actually count, whereas for Erasmus students it's practically a holiday.

You are more likely to be closer to internationals since you are all in the same boat and are as equally open (or desperate) to make new friends. What does this mean? Well that you'll be speaking English most of the time since it is the lingua franca amongst internationals but at the same time you'll pick up awkward English spoken by foreigners. So whilst your English deteriorates, so does your Spanish. Great.

This is exactly the situation for me working as an English teacher at a university in Spain. Unfortunately I am spending most of my time speaking English due to my job and am not practising enough Spanish. 9 months on, I have quite an ear for the ‘Spanglish’ and often slip up in speech with this special form of English myself.

For example instead of ‘waste time’, I would say ‘lose time’, the direct translation of perder tiempo in Spanish. The same goes for 'make sense' vs 'have sense'/ tiene sentido. You know when it's got really bad when you start to pronounce your ´s´ as ‘ES’ by saying ESpain, EStudent, Spiderman or even ESteven ESpielberg for that matter. Cringe.

What's worse is that I do not speak Spanish in my flat either even though I’m living with my boyfriend, who is a local.

What, a local boyfriend? You must have language exchanges everyday surely?
Well not exactly. Not if they speak fluent English.

But you can still try to practise in Spanish right?
Yes I can but miscommunication often develops quickly as I can’t express myself in Spanish that well. My boyfriend also finishes my sentences because he knows me that well and often doesn’t have the patience to hear the rest of my Spanish. So yeah, going out with a local may not be the best way to improve your Spanish if it’s just easier to communicate in English.

However, that's not to say you shouldn’t make friends or have bfs/gfs just because it will hinder your language learning (sounds silly but that's what I thought at the start). I didn't want to hang out or live with English speaking people and was obsessed with immersing myself into the Hispanic world. However, instead of stressing yourself out over learning Spanish like I did, take it easy and relax.

Languages are meant to be fun!

The best way to make a language fun is by interacting with people and practising it, which you can do by:

Hanging out with more Latin American Erasmus students.
Your ‘English-speaking-only-erasmus-friends-and-Spanish-flatmates-are-busy’ problem solved. Not only can you practise Spanish with them but you can share the same Erasmus experience. However, bear in mind that many are only in Europe for a semester.

Going to language exchanges!
They are a great way to practise Spanish. If you feel like you have no exposure to locals, exchanges are a perfect place to go to. Most of the time there are more locals than internationals - depending on the language exchange - as Spanish people are really keen on practising their oral fluency in English. Just be wary that some people go there just to 'ligar' (pick up women), especially if it's an event in a bar or club.

If you prefer a guaranteed way to secure a language partner, you can head to Conversation Exchange. Once you sign up, search people in your area that want to learn English and speak Spanish and hey presto, you’ve got a list of potential future tandems to contact. I’ve used this both in UK and Spain and it works really well.

Volunteering.
Many year abroad students don't think about volunteering but it's a great way to meet new people in addition to learning new skills and adding something to your CV. Hacesfalta is a great website to search for volunteering opportunities in Spain.

5. When will I become fluent?

It is important to adjust your expectations and to have patience. You won't become fluent unless you're at a high intermediate level already. This year I've learnt how frustrating learning a language is. You start to build confidence which soon gets knocked down. For example, I thought I knew how to speak Spanish I had to go to the doctor to explain an embarrassing infection. Don’t ask what.

6. The painful, yet somehow fun process of learning a language

What I want to emphasise is that language learning is a never-ending struggle. Nothing is ever enough. Rather than trying to reach the ultimate goal of trying to sound as sexy as Penelope Cruz in Spanish, it is better to break it down into more focused goals. For example, if you want to improve your listening, try listening to the radio everyday or if you want to improve your oral fluency, go to language exchanges several times a week. This way, you'll be less frustrated and more focused on improving your Spanish poco a poco.

At the end of the day it's really up to you. You could be in Spain, live the expat life and go through the whole year speaking English or you could try to integrate into the Spanish culture and way of life. The choice is yours.

I remember a teacher once telling me people often either greatly overestimate or underestimate their language proficiency. So if you're like me and think your Spanish is bad then you're probably better than you think you are!

The Hidden Curse of Bilingualism?