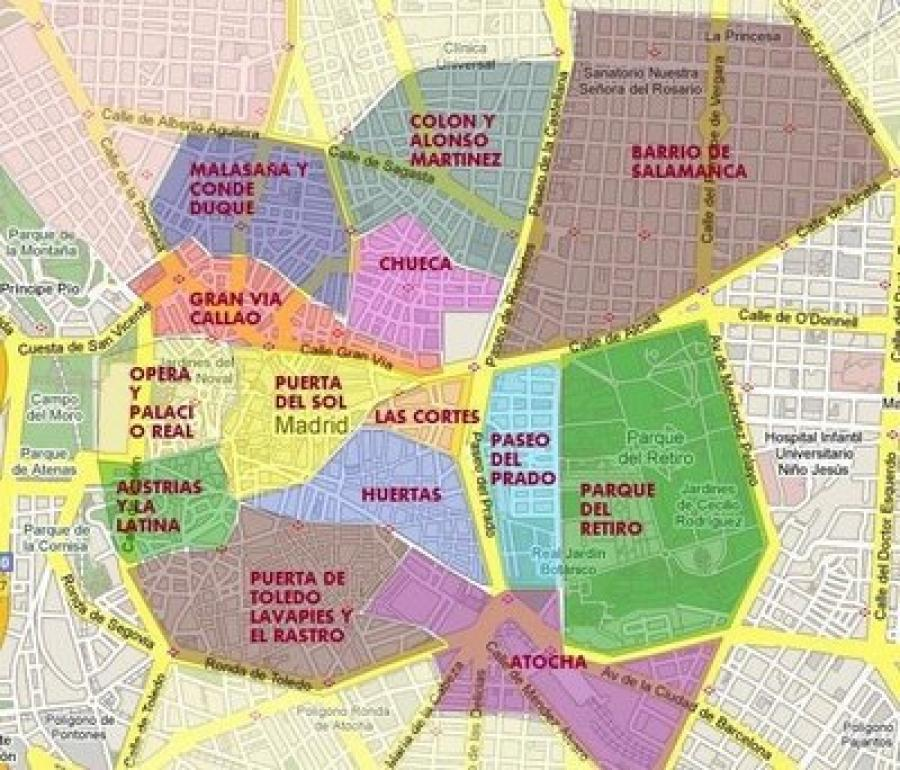 This article was written by Lucy Colclough from The University of Southampton, published on 14th September 2015 and has been read 47992 times.

Lucy studies Spanish and History at the University of Southampton. While on her year abroad in Madrid she worked for 6 months as a marketing intern in an art museum and then for the remaining 3 months as an intern bookseller in Casa del Libro. She also spent time creating a year abroad blog, travelling throughout Spain, practicing photography and learning to play the clarinet. This is her guide to Madrid's barrios, to help anyone struggling to choose where to live!

Choosing a place to live in Madrid on your year abroad can get confusing what with all the different areas of the city on offer. In this post I'm going to list the various central barrios or neighbourhoods and give a short summary of their main characteristics which hopefully will help you choose where to start your flat search!

In my time abroad I lived in 3 different flats in 3 different barrios so have quite a bit of first hand experience. I won't be going into any great detail as to the price of rooms in certain areas as this can vary but I'll give you a heads up as to the most expensive/cheap areas.

Above is a map of central Madrid with the barrios clearly marked.

This is the very heart of the city; Gran Vía is the Spanish equivalent of Oxford street and is often packed with traffic and people. This is not a quiet neighbourhood though the noise is generally traffic related rather than due to clubs/music. Fantastically well connected all the shops/restaurants/bars/cinemas you could want are within walking distance and being right in the centre it's tricky to get lost. Despite its central location though I wouldn't really recommend living in this barrio; too loud and too busy!

These are famously popular areas for young people/students to find a flat. Madrid's self-proclaimed "alternative" barrios Malasaña and Chueca are not for those who like peace and quiet. Malasaña defiantly holds on to the Movida Madrileña spirit of the 80s and is full of trendy bars and clubs. Brilliant independent shops can be found here and there's quite an arty/alternative vibe. Chueca is the city's gay barrio - but don't let that put you off! Sure there are plenty of gay bars etc but the atmosphere is distinctly inclusive with a pretty chilled vibe in the day time and everyone ready to party the night away! Flats here can vary in price (and quality) quite a bit as they're mainly occupied by students and other young people.

This barrio links the more edgy Chueca with the more upmarket Chamberí and Salamanca. This is a great spot to live due to its central location and relaxed atmosphere. There are some lovely squares here with plenty of places to eat and shop. Great transport links are also another plus with a cercanías stop as well as metro. Rooms are generally quite cheap especially around Alonso Martínez. The Glorieta de Bilbao is a huge roundabout where several main streets converge; if you follow Calle Fuencarral downwards you'll be in Malasaña and then Sol in no time.

These areas have more of a traditional/historic vibe. There are still plenty of restaurants and bars (Madrid's most famous jazz bar Café Central is here) but the atmosphere is calmer than Malasaña/Chueca. Unfortunately, though, their proximity to Retiro Park and the Paseo del Prado with its world famous Prado Museum means that these barrios are some of the most expensive in Madrid. Not many students or young people manage to find accommodation in these areas due to the price.

This is the historic heart of Madrid where many of the oldest and most beautiful buildings are to be found. The royal palace is here surrounded by gorgeous gardens and cafes with terraces to sit out in the sun. The main theatre in Madrid is also here with world class drama and opera being performed throughout the year. Much more relaxed than the noisy Malasaña/Chueca but still very central these areas are only a 10 minute walk away from Sol and the Plaza Mayor. Not many students/young people live in these areas as their proximity to the Palace etc has pushed up the price.

A small, traditional barrio La Latina is perfect for eating out. The cobbled streets are full of tapas bars particularly Calle de Cava Baja which is famous for the best tapas in the city. Although still pretty close to more expensive areas like Operá this barrio is a little more affordable. One of the least touristy areas of Madrid, La Latina is a great place to witness true Spanish culture. In the day time this area is peace and quiet personified but in the evening it can get a little more lively especially along the more popular eating-out streets.

These areas are a bit further out from the centre but still very easy to get to in as little as 3 stops on the metro. Lavapies is the immigrant area of Madrid which can put people off but it's a great place to live for many reasons. Cheap accommodation, great multicultural food stores/restaurants and an interesting night life. In the daytime these areas are full of families and I often saw an African drumming group jamming away as I walked through. For the majority of my time away I lived in Embajadores, a smaller area within Lavapies, and absolutely loved it. El Rastro, Madrid's most famous flea market, is here which is also lovely to mooch around on a Sunday morning.

This area isn't actually labelled on the map above but it's the light pink section just to the west and north of Malasaña. Many of the students coming to study at Madrid's universities (eg. Universidad Complutense) lived here as it has such great transport links to the unis. This barrio has a really relaxed vibe with plenty of fresh air and green space; the Templo de Debod is a must see! It's also really close to Casa de Campo the huge green area to the west of the city which is great for walking/picnics etc.

These barrios are the closest to Retiro Park and as such are the greenest in the city. Though the majority of flats here are pretty expensive you can occasionally find a good deal. Having the fantastic park on your doorstep may be something you're willing to pay a little extra for! This is a more family-focused part of the city so if it's great nightlife you're after you might want to look elsewhere (though oddly Madrid's most famous club Teatro Kapital is here). Despite being further out of the city you can still hop on the metro and be in Sol in as little as 20 minutes.

Atocha railway station is also useful to have nearby as it's where most trains that will take you to explore the rest of Spain will leave from. I lived here for a few months and although the park was right behind my apartment building the huge Paseo Reina Cristina was right in front. This meant that I couldn't really have the windows open because of the noise given off by 7 lanes of speeding traffic - something to think about.

Salamanca is without doubt the most expensive barrio in Madrid. Huge, wide streets are lined with luxury shops, restaurants and lounge bars. The people that live here are usually a little older having made a success of their careers and are now able to afford a swankier apartment. Also a very family oriented area of the city there are play grounds and designer kids shops dotted about. I was lucky enough to experience life here during my first month in Madrid living in my homestay and could see why it was so popular.

Unfortunately, unless you've got quite a bit of money to spend, the rent on a flat here is likely to be just too much but with so many other great places to live in Madrid that's not anything to be disappointed about!

What is the best way to find accommodation in Spain?

Idealista.com is definitely the best website to use when looking for accommodation in Spain. There is also Fotocasa.es which was quite helpful, and EasyPiso as well, except you have to pay for that on...