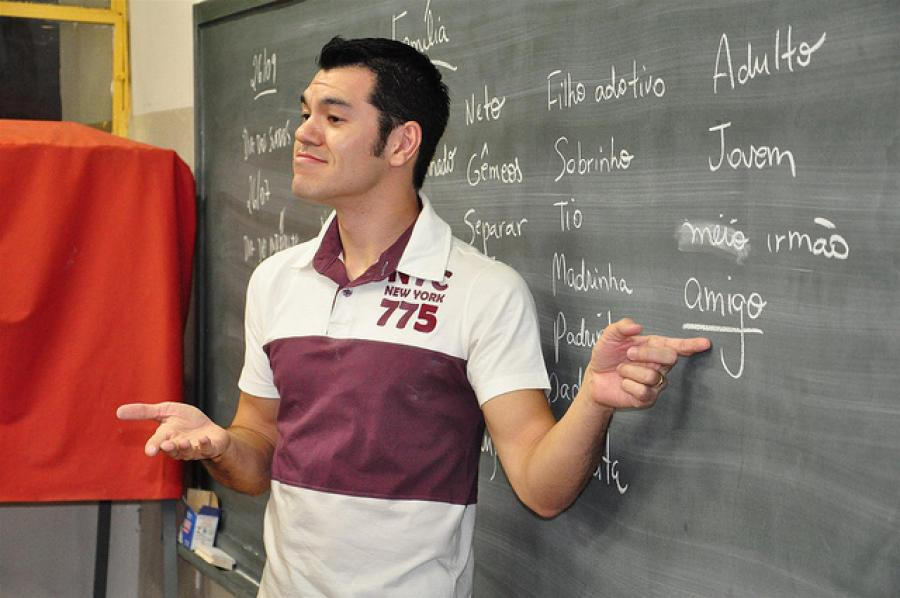 This article was written by Kia Marie Hunt from The University of Birmingham, published on 14th April 2016 and has been read 2614 times.

Kia Marie Hunt is doing a degree in Hispanic Studies at University of Birmingham, and is spending the first semester of her year abroad at the Universidad de Montevideo, Uruguay, and the second at Universidade Federal de Santa Catarina, Brazil, where she is learning Brazilian sign language. To keep up with her adventures, check out her blog and, in the meantime, read on to discover what it's like to study sign language in a foreign country...

My name is Kia, and I’m addicted to learning languages.

When I was small I watched my grandad speak Hungarian with our relatives and I was fascinated, ever since then being able to communicate with someone in a way other than English has completely captured my interest. I taught myself some Hungarian and did pretty well. (I really wish I had carried on!) But then I got to school and I discovered French, Hungarian was left in a ditch and I loved French for about 2 years… Then when High School came along I fell out of love with Français and straight into the arms of Español.

I had a problem; I was a language adulterer! What was the point of starting a language if I couldn’t commit to developing it fully? After a difficult summer of trying to teach myself Russian, I finally decided that during University I would focus my attention purely on Spanish and Portuguese, and only once I had an advanced knowledge of them would I pursue my other language interests.

One of those future interests is British Sign Language; I’ve always said that once I graduate I will learn it, as I think it’s amazing when I see people communicating in this way.

When I arrived at the Universidade Federal de Santa Catarina, (yes, believe it or not I do actually study here too, I’m not just spending ALL of my time on beaches) and met the professor for LIBRAS (‘Lingua Brasileira de Sinais’ or Brazilian Sign Language) and discovered that he ran a course for beginners, I just couldn’t help myself… I know I said that I wouldn’t start any new languages just yet, but a chance to explore this opportunity was too good to miss!materia-libras-linguagem-brasileira-sinais_mainstory1

Although I have only been studying this for a couple of weeks so far, I already have so much to say about what a unique and challenging experience it has been.

The first thing you need to know is that every country each has their own version of Sign Language. So learning LIBRAS here won’t help me to learn BSL at home. For a start their alphabets are completely different! Interestingly, a lot of people assume that deaf people in English speaking countries such as England, America, Australia, etc. would be able to understand each other, but this is not the case. Sign Language is not created in direct translation to the language of the country, it is instead a separate entity in itself, meaning that someone using British Sign and someone using American Sign would result in a lot of confusion, as these count as two different languages.

2. An insight into LIBRAS

In some ways, learning LIBRAS so far has been very, very difficult. Especially seeing as Sign Language basically has to be learned by memorising and practising constantly- you can’t really write down any notes to read over!

However, it is also easier than learning other languages with regards to ‘why things are the way they are.’ What I mean to say is, written and verbal languages such as English, Spanish, and Portuguese are completely arbitrary. Which is a fancy linguistic way of saying that they are basically totally random. For example, nothing about the word ‘fish’ is in anyway related to a fish itself, it’s just a bunch of random sounds and letters that we assigned as a term to use for fish and we have got used to this over time. Some argue that onomatopoeic words aren’t as arbitrary, but if you think about it, nothing about the letters ‘p-o-p’ truly symbolise or replicate the sound that we associate with the word ‘pop’. In learning sign language however, the majority of the time things are much more logical. When the sign for ‘fish’ is literally using your hand to mimic the movements of a fish, it’s much easier to remember than it would be to remember a sequence of random letters written down and recited.

That isn’t to say that LIBRAS is just a class in mime – not every word is as simple as fish! The language is actually very complex, users express themselves with signs, facial expressions, and many intricate structures. The classes I have taken so far are only scratching the surface on what I expect would be a long journey of deep learning before one could really understand and fluently communicate in LIBRAS.

3. Being free of the English language

Another interesting thing about taking this course is that English is never involved. When learning Spanish or Portuguese I have always translated between English in order to understand and remember. But here we are taught LIBRAS translated from Portuguese, so when I remember the signs, I remember them by memorising their Portuguese definition, so I never find myself using English to translate what they mean. For me this is a such a new and exciting experience, as I’ve never learnt a language completely free of English influence before. And not only is it refreshing, but it also feels as though it is helping me to improve and develop my Portuguese too. Although it’s a separate language, I almost think of LIBRAS as an extension of my pre-existing Portuguese knowledge. I’ve even been introduced to a few terms as signs first, and then discovered the Portuguese definition (and its English translation) later on!

4. An entirely new way of communicating

The last thing I’d like to express on the topic is how awesome it is to learn to communicate in such a completely different form. Our classroom is completely silent, apart from the occasional laughter when our teacher signs out something amusing - he can’t hear us laugh but he knows we are all smiling! The majority of the time we learn by simultaneously copying out the signs that he teaches us, which to him I suppose must be the equivalent of everybody talking all at once! It seems so amazing to me that we never speak or write yet we are able to understand and express so much.

I hope that this experience doesn’t go to waste and that when I return home I can find someone to keep practicing LIBRAS with. It has also inspired me and made me even more excited to learn British Sign Language when I return, I can’t wait to extend my English communication skills in this way too.

I also hope that this has given you a small insight into what it’s like to learn a foreign Sign Language, as I have certainly learnt things I would never even have thought about before this. Who knows, maybe I’ve even inspired one or two to take an interest in learning some form of Sign Language – I would certainly recommend it!

P.S. I will leave you with a final tip; if you are very late to your first ever Sign Language class – please remember that the teacher is deaf! Don’t knock on the door and then enter and say “sorry I’m late“- because they won’t be able to hear you! (Yes. I actually did that… silly me)