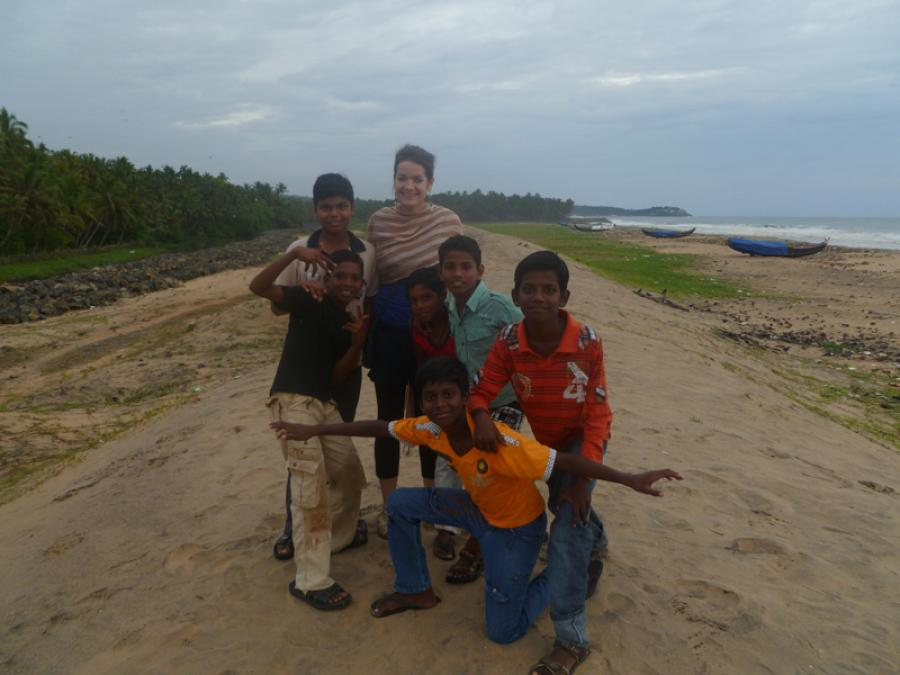 This article was written by Lauren Pluss, published on 8th March 2012 and has been read 4395 times.

When? September 2011- December 2011What? VESLWhere? Kerala, IndiaIn my final year at university I couldn't decide exactly what I wanted to do, I spent my third year of university studying in Canada and really wanted to travel again! But I wanted to do something worthwhile while I was doing it. Through a travel fair at Edinburgh University I found out about a charity called VESL who offer teaching placements in India, Sri Lanka and Thailand. They are a small NGO based in the UK that offers teaching experiences that last between four and twelve weeks, you do not have to have any formal qualification to volunteer with VESL, which was a bonus for me as I am a Geography graduate!

After deliberating which country to teach in I decided to go to India for three months from September 2011 and it is one of the best decisions I made , I spent the summer after I graduated fundraising for my trip and working, I was slightly nervous on the run up to finally going and especially about meeting the family I would be staying with. I travelled out with two other VESL volunteers and we had a sneaky stop over for two days in Dubai.

Arriving in India was quite chaotic, the passport control was the first of many crazy Indian systems we were to come across in the next three months. After battling with the crowds at four o’clock in the morning we finally escaped the airport and entered into the hot, humid Indian climate that we came to know and... Love! After spending a couple of days staying in a nearby tourist resort, catching up on lost hours sleep and acclimatising ourselves we moved to the villages we were staying in. I have to say I was slightly worried about meeting my host family for the first time, I had been warned that they spoke next to no English, and not knowing any of the local language I knew many interesting times were ahead! But after a couple of days I literally felt like I was a part of the family, they woke me up for chai (Indian tea) every morning at seven o’clock (took a little bit of getting used to) and then prepared me breakfast for eight thirty. They made all my meals, would literally not let me do a thing, it took me nearly a month to eventually let them allow me to wash up my dish after I had eaten! To help settle in I had local language lessons (Malayalam) from the in-country coordinator, which meant I was able to communicate with my family and we could vaguely understand what we were trying to say to each other, the most useful word was ‘venda’ which means ‘no more’ mostly used in the context of food... I was fed a lot!

Having no English teaching experience I was slightly terrified at the prospect of 40 – 50 children all staring at me and expecting me to teach them something! But after the first couple of days when the excitement had reduced a (very) little bit I started to find my feet. I taught standard seven, which is roughly the equivalent of year six, I had five classes to teach and taught between 9.30 and 12.00 every day. I set up an English club for the higher level students and ran it twice a week in the evenings, it was very successful and something I hope future volunteers will run. One of my most memorable experiences in India was when the school forgot I was running English club and accidently locked us in there for forty minutes, it was an interesting time!

Whilst out there we were luck to receive funding from several sources, of which the majority came from a school (Maltby Academy) which enabled us to improve the aesthetics of the schools we were working in by painting nine classrooms and planting trees in the school grounds. It was very fulfilling knowing that not only had we made a difference to the lives of the children we had taught by improving their English, but that all children that will go to the school in the future will benefit from the aesthetic work that we did there.

The hardest part of teaching for me was the discipline, because the school use the cane as a discipline method and there was no alternative (and we obviously did not use this method) it was difficult to control the classes at times. Especially when you have 40 children running around the classroom causing chaos! It took some getting used to, but by introducing a reward system of stickers and student of the week, I managed to gain control, even in one of my most unruly classes!

Luckily the projects in Kerala are placed within easy distance of Trivandrum (the capital of Kerala) which is good for air and train connections all across India. Most weekends I went away and visited places within Kerala or in the neighbouring state Tamil Nadu, sometimes I went away with my Indian family who liked to show me off to their friends and family. After I completed the project, myself and the two other volunteers flew to Delhi and then got the train back down to Kerala and stopped off at some amazing places along the way, definitely worthwhile if you have the time and it's relatively cheap.

What about the future?

VESL are trialling a Student Leader program this year, which means that you can return and the cost of your trip is paid for if you can recruit enough volunteers to go with you. Luckily for me, I am now part of this project and I am returning to India this July, I can honestly say that I cannot wait to go back! I couldn’t recommend doing this enough, if you are interested check out the VESL website or attend one of their selection and information events.

Hi,Thanks for your interest in the Generation UK-India programme. We offered cultural immersion placements last year however this year we are still not able to confirm whether they will take place as...