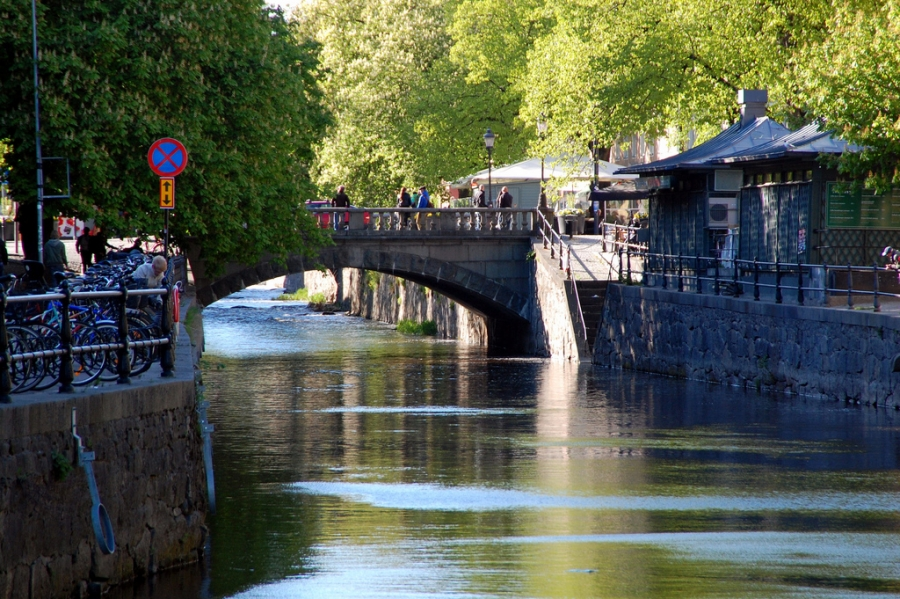 This article was written by Dominic Hinde, published on 9th April 2010 and has been read 33429 times.

Sweden Mole Diaries Swedish-speaking
Here's Dominic Hinde's review of his year abroad. Currently studying at the University of Edinburgh, he's putting the final touches on his fourth year, reading German and Scandinavian studies and he's sharing his year abroad experience in Uppsala, Sweden with us...

I'm a 22-year old undergraduate student of German and Scandinavian studies at the University of Edinburgh. I chose Scandinavian Studies because I am interested in progressive politics, Swedish indie-music and Nordic literature. I spent a year on exchange in Uppsala, Sweden in order to improve my Swedish and I enjoyed it so much I'm moving back to live and study there.

My year in Sweden was the making of me and the country had a real impact on how I viewed Britain too. Not everyone likes Sweden and for some British people the collectivist mentality of Swedish society is hard to accept. It can also be tricky to get outside of the international student bubble which you are forced into but if you do the rewards are manifold. Sweden might not be as exotic as some other exchange destinations but it has its own charm and is far from the backwater which some people, including Swedes themselves, often characterize it as being.

Packing off to Sweden

I had been to Sweden many times before and so the country was not a great culture shock, but it is unlikely that British students will want to jump on the first boat home even if it is their first time. As a Western European democracy Sweden is actually very similar to Britain and the Swedes are anglophiles with a largely positive, if sometimes naive, view of British people and the UK. Some things require a little adjustment such as learning to drink less and staying in to socialise instead of going out, but by and large Swedish customs will not be alien to British people.

A bit about the country itself

Sweden is one of the few countries British students will travel to which has a higher quality of life than the UK. Crime is lower, wages are higher and education is entirely free from nursery school through to postgraduate level at university. Investment in education is huge and Swedish universities are well equipped institutions which take education very seriously, whilst the right to a high quality education is highly valued by Swedes themselves. Swedish universities are not as selective as British ones and there is generally a wider range of aptitude than you might find in the UK. Likewise the emphasis is on practical learning and education rather than exam marks and most courses are marked on the basis of obtaining a fail, a pass or a distinction.

The British degree classification system does not really have a parallel in Sweden, which can be challenging if you need to bring back marks to your UK course. Sweden is also a beautiful country, especially in the springtime and during the middle of winter when cold, crisp days are common and there is snow on the ground. Sweden is still a rural society, in its mentality at least, and during the summer it is a lot of fun to round up some friends, head into the countryside and go camping or rent a cabin. The cities empty out during the summer and Swedes take long summer holidays, sometimes taking up to a month off work. It is possible to go by night-train to arctic Lapland from a range of places across the country for comparatively little money, whilst train tickets generally are cheap for students and are an easy way to see the country. Sweden has a fantastic cultural heritage and hits above its weight in terms of cultural impact. Swedes are avid readers and the number of books published each year is phenomenal, whilst the country enjoys generous arts funding. As a result of this, there are hundreds of high quality museums, galleries and music venues which are either free or relatively cheap. Newspapers are subsidised by the government and are less trashy than their British counterparts. If you are interested in getting involved in the cultural scene there is no shortage of opportunities.

Studying at the local university

Unlike some other European countries, an exchange year in Sweden is not an easy ride. Many courses and institutions, Uppsala included, operate a system where failure to attend seventy per-cent of the lectures will result in an automatic fail irrespective of the marks you obtain. Exchange students are not treated leniently and you will be required to do the same amount of work as the Swedish students with whom you study.

Grasping the language: the small print

As a Scandinavian speaker you will also find it hard to communicate in Swedish, especially if English is your first language. As in most other parts of Northern Europe, English has become the lingua franca for international communication and education, meaning that universities in particular are full of students and staff with a high standard of English who will push tooth and nail to speak it, often believing that they are making life easier for you. With the exception of Finns and middle eastern immigrants, Swedes are not used to hearing foreign accents in Swedish and will often assume that you do not speak the language or that you are a tourist. In everyday life the most important thing is to have a convincing accent. Even if you say all of the right words Swedes will struggle to understand you if you do something as simple as stressing the wrong part of a word.

People who have never been often moan about how expensive Sweden is, but in real terms it is actually cheaper than the UK. British pounds are not as powerful as they used to be and so for British people Sweden has become fractionally more expensive of late, but still affordable. As a student your biggest drain will be buying books for courses (often up to 30 pounds each) and alcohol. The best thing you can do is train yourself to drink less, you will not be looked down on for doing so as Swedes are not big drinkers. It is not that common in Sweden to pop out for a few drinks, alcohol consumption either takes place with a meal or on a night out. Anything with more than 3 percent alcohol is sold from the state-owned 'systembolaget', a chain of off-licences which can be found in almost every city, town or large village in Sweden. They are like alcohol supermarkets and stock a fantastic range of drinks from across the globe. It is possible to pick up a cheap bottle of red wine for around 6 pounds, but you must be over 20 and carrying official ID (passport or driving licence) to shop there. By the end of the year you will have memorized the systembolaget opening hours, otherwise you end up arriving at a party with a pack of 2.5% lager purchased from the local supermarket. Food costs more than in the UK but is often of a higher quality. Shopping in a Swedish supermarket is comparable to shopping at Waitrose or Marks and Spencer in quality and price.

The one thing you should definitely have in Sweden is a bike. They can be purchased cheaply from one of the large supermarkets ICA Maxi or COOP Forum and need not set you back more than fifty pounds. There is also a large second hand bike market but it is often hard to be sure of quality and where the bike has come from, my bike was stolen and re-sold to someone living in the same block of flats. If you cycle it will save you buying bus tickets the whole time and gives you a great amount of freedom. Cycle paths are a standard feature of Swedish cities and getting around by bike is probably the easiest way.

Why not read our other Been There Done That reviews to get a real view on what's it like once you're out there?

Not sure if you want to study? Check out our Volunteering Abroad and Working Abroad sections!