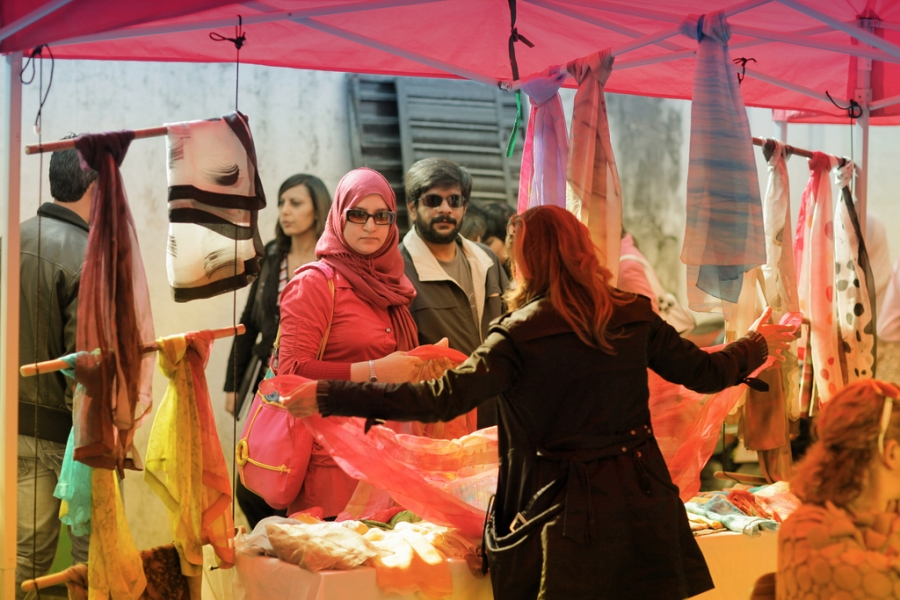 This article was written by Alice Genge, published on 9th April 2010 and has been read 7816 times.

Arabic Tunisia
What?  One month intensive Arabic language course at the Institut Bourguiba in Tunis, Tunisia.When?  July - August 2008Find out what to pack, what to leave behind and where to go while you're there on your year abroad...

How did I make the magic happen?
Being a mother and a worrier, my mum was obviously very concerned when I did not have every last detail of my year abroad planned months in advance. For this I am actually very grateful, because although it meant that the constant stream of newspaper clippings that she found and sent to me were blocking up my postbox, there were some diamonds in the rough. This allusion to Aladdin is no coincidence, as for the last part of my year abroad, I was determined to find an exciting Arabic course to refresh the distant memory of any Arabic vocabulary. I searched online and sought assistance from my language tutors at university, but was struggling to find a course that was short-term yet worthwhile, and also that would not aggravate my mum's fear of me heading to the Middle East. Fortunately, while I was studying in Russia, there was a brilliant article in the Telegraph travel section about a journalist who had travelled to Tunisia and studied at the Institut Bourguiba in the capital Tunis. My mum immediately sent me the details and, since I had limited access to internet, signed me straight up. The course, which lasted one month, was extremely good value with the course fees, textbooks and accommodation costing just under £400.

I chose the accommodation called Rafia which was based in a traditional Tunisian house on two floors, with a mezzanine with bedrooms off it, and a courtyard below where we ate and did our homework. Lessons were from 8AM until 1PM, five days a week, which left the boiling hot afternoons free to participate in all the activities on offer (or simply to relax and sleep!). I have always been a joiner, and I signed up for belly-dancing twice a week, calligraphy twice a week and a Tunisian cookery class on a Friday evening. The latter was an interesting experience, spending 5 hours in a kitchen with 40 other students and 6 ovens on full heat, when the air temperature was already about 35 degrees! The delicious food that we got to eat, and the pastries that we made and could take home in goody bag, did make it significantly more palatable though...

The lessons themselves were excellent for such a short course. There were around twelve levels of abilities, and a short oral test at the beginning determined which class each student should be placed in (unless they were a complete beginner). The classes were of mixed nationalities from all over the world, and the great thing was that they were conducted entirely in Arabic. This may seem daunting at first, but is actually an excellent way to learn a language as it vastly improves your memory skills.  I met an amazing group of people on this trip and had many fun experiences to bring back home with me! Not only did I greatly improve my Arabic and my confidence when speaking it, I also had the opportunity to show off my belly-dancing skills to an audience of 700 people – who wouldn't want to do that?!

What to pack: Loose fitting cotton clothing – it really is very hot at that time of year. When I was there, the temperature regularly got up to 48 degrees. Tunisia is relatively relaxed about its dress codes for women, but it is wise to dress fairly conservatively if you don't want to get too much attention! Mosquito repellent: I slept with my door and window open (the house was locked at night) but the bugs do still get in! Padlock – you can never be too careful with passports and money so I preferred to padlock them in my bag when I was out. A good map of the town, and locate your accommodation on there before you try to get into a taxi at the airport! My taxi driver definitely pretended not to know where he was going and ended up driving round Tunis for an hour and a half before charging ten times the amount it should have cost! Not a good start so just be aware. You will need money to register at the university on your first day – you can get this out from any ATM. Sun tan lotion. Washing powder for your clothes...

What NOT to pack:

Revealing clothes: you will get hassled and it's not worth it!

Cooking utensils: the places are self-catering and generally there aren't many utensils, but they are VERY cheap to buy from any market so best just to by them there.

Too many clothes: there are loads of beautiful things to buy in all the markets so you will want lots of space left in your bag.

Sidi Bou Said:  a really beautiful seaside town just outside of Tunis. You can catch the tram there or a taxi is quite cheap if there are a few of you sharing. The medina: a maze of shops and stalls which offer lots of traditional Tunisian delights – don't get lured in by any 'guides' and always always haggle! Hotel International: the biggest hotel on the main street, it has a beautiful balcony from which there is an excellent view of the city. You don't have to be a guest or buy anything to go up there and the air-conditioning in the lobby feels so good! La Goulette: another seaside town with the most amazing fish restaurants. We went to one which had a fishmonger's where you chose your fish and then paid for it by weight. You then chose your side dishes, and they cooked it all up for you there and then – delicious! El-Jem amphitheatre, on the Sahel coast: an ancient Roman site which is one of the largest and oldest amphitheatres in the world.

Do NOT visit the city zoo!  This was one of the worst places I have ever been, and the ten pence entrance fee was only worth it in order to provide a bit more income in the hope that they will make it better. The saddest looking animals in the most awful conditions!

Visit the British embassy: they were incredibly helpful people.