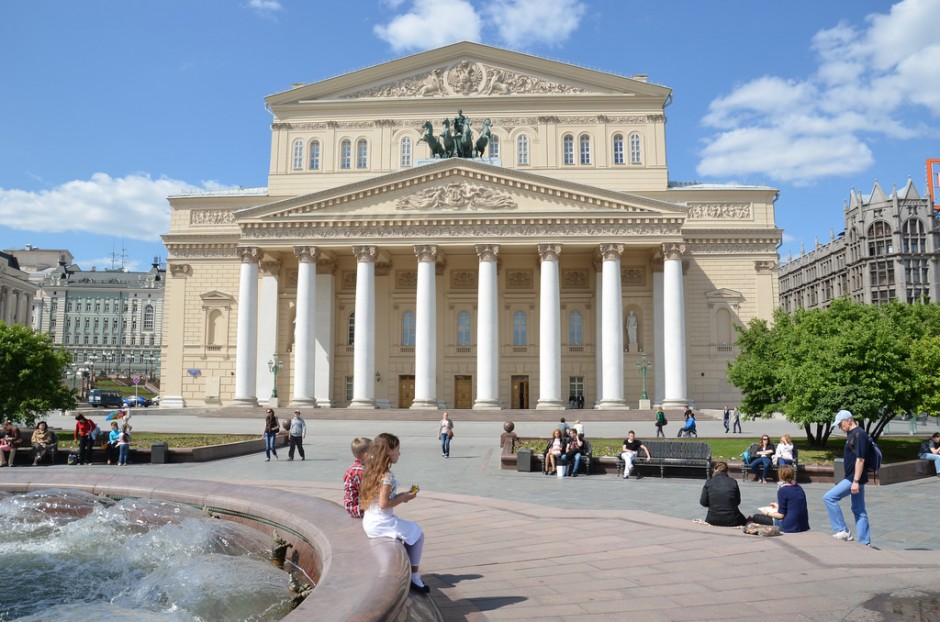 This article was written by Imogen Burgoyne from The University of Birmingham, published on 10th January 2018 and has been read 4371 times.

Imogen is doing a BA in Modern Languages (French, German, Russian) at the University of Birmingham, and is spending her year abroad studying Russian Language at Language Link in Moscow for 16 weeks, before moving to Vienna to study German at the University of Vienna, and doing a summer intensive language course in France. Here is her guide to the top 10 things to do in Moscow...

Whether it be on a bus tour, a boat cruise down the River Neva, or just wandering around the city centre, the key to feeling at home in this vast city is orientating yourself. Do your research to recognise your Seven Sisters from your 3Moscow City Skyscrapers, pick up a map of the metro, and spend time wondering through the impressive streets of the city centre. You will almost always stumble across a looming state building, beautiful church, or impressive monument and the tremendous size of the city means you will never be at a loss for things to do and see.

A Raf coffee is a Moscow speciality, and its sweet taste is the perfect accompaniment to any dessert or cake (I would recommend the very delicious ‘kartoshka’ – translated to ‘chocolate potato’). The story has it, that Rafael Timerbaev preferred his coffee with milk, so his local coffee shop created a coffee made from a shot of espresso steamed with cream and sugar. The ‘Raf’ caught on and has become a popular drink for modern-day Muscovites.  Order one of these, and it will probably be served with a straw, as are the majority of Russian coffees and hot chocolates.

The Soviet government introduced state canteens to promote the idea of preparing and eating food communally. Still very much popular today, stolovayas are great places to try traditional Russian food at incredible prices – a meal made up of a few different dishes can cost around 300 rubles. I would recommend trying traditional dishes such as plov, pelmeni, and sirniki (little patties made from tvorog, or Russian cottage cheese). Do try to learn some simple Russian terms for food however, as the fast-paced canteen system sometimes requires naming the dish you would like put on your tray (although in general a bit of pointing goes a long way…).

4. Keep an eye out for the Seven Sisters

The Seven Sisters are a group of impressive skyscrapers dotted across the city. In Russian, the buildings are called “Stalin’s high-rises” having been built under the instruction of Stalin who believed Moscow needed skyscrapers to compete with capital cities across the world. Amongst the skyscrapers are the Hotel Ukraina, Moscow State University, and the Ministry of Foreign Affairs. The buildings are built in Baroque and Gothic styles, each with spires and a distinctly-Soviet look, and are definitely worth visiting or keeping an eye out for as you travel around the city. I’d also recommend visiting Sparrow Hills which provides an incredible viewpoint across the whole city and spectacular high rises of the business district, and is a great spot from which to look out for the Seven Sisters.

5. Explore the metro and its customs

The metro stations in Moscow are stunning: each with its own character and history, the stations are full of exquisite chandeliers, mosaics, stained glass panels, and marble columns. Ploschad Revolyutsii was apparently Stalin’s favourite; 76 bronze sculptures of soldiers, school children, and factory workers guard each column and it is good luck to rub the golden edges of the sculptures on your way past. The key to looking like a Muscovite in the metro is as follows: continue wearing your winter coat and scarf, no matter how hot you may be, push your way through so you’re standing in front of the train doors way before your stop, and have something to do on the escalators – they take a good few minutes out of your day!

To be a true tourist in Moscow, you just have to get your iconic photo in front of St Basil’s Cathedral. Red Square is truly as impressive as anyone will tell you, and it’s definitely worth going there in the sun, golden hour, and dark if possible to see the church and surroundings in all its glory. The Lenin Mausoleum is also located in Red Square; the mausoleum is open Tuesdays, Wednesdays, Thursdays, and Saturdays from 10:00 – 13:00 and is free entry. The Kremlin is on one side of Red Square, and is again, an iconic place to visit: you need tickets to enter the Kremlin, but once through the Spasskaya Tower Gates, you can wander around the grounds and visit the Armoury Chamber, Cathedrals and the impressive Tsar Bell.

7. Go into GUM and try the ice cream

GUM is a luxury department store located on one side of Red Square. The building’s interior is stunning – complete with ornate bridges, lights, and a central fountain that beautifully reflects each season with an impressive display of a seasonal crop. During the summer, the fountain was piled high with watermelons and, as October has rolled around, visitors are surrounded by the spirit of Autumn, as pumpkins fill the fountain. The famous GUM ice cream is a must-have for any visit; costing only 50 rubles and tasting amazing, it’s worth trying every flavour. Here you can also find a luxury food store ‘Gastronome No.1” which is the successor of the Soviet store where the tradition was to buy exquisite products for family celebrations. The colourful confectionary, wine, sausage, and bakery departments are places you could easily get lost in for hours.

Moscow has many parks where you can escape the business of city life. One such park is Park Pobedy which was constructed in honour of Russian victory in World War Two and contains a 140-meter-high obelisk, as well as monuments, tanks, and weaponry, a WW2 museum and four beautiful memorial temples. The glistening fountains and food stalls mean that you could easily pass an afternoon wandering around the park before stopping to gaze at the Triumphal Arch which celebrates the defeat of Napoleon’s army. The metro stop is also home to one of the longest escalators in Europe as the station is 84 meters underground, so bringing a book is a good idea!

Moscow has many locations for foodies; from fancy food stores to incredible markets, even poking around a supermarket is a fantastic way to learn more about the food culture of Russia.

Located on Tverskaya Street bang in the city centre, the Eliseevsky food shop oozes luxury – its huge chandeliers, elaborate decorations, and an abundance of marble makes it perhaps the most beautiful store one could explore! You can buy everything on your shopping list there – from caviar to fine cakes and chocolates, luxury wine and vodka, and, naturally, toilet paper and cleaning products.

The Dorogomilovsky Market is an incredible fresh food market: with beautiful displays of fresh and dry fruits and a butchery department (not for the weak stomach – they do most of their carving in front of you), the market is a great place to see the city’s local produce.

The Russian ballet is undoubtedly one of the most famous and for good reason – the dancers are amongst the very best in the world. Whether it be Swan Lake, The Nutcracker, or Giselle, watching a ballet in Russia was one of my bucket list desires. Moscow is home to many beautiful theatres, including, of course, the spectacular Bolshoi Theatre – tickets for the Bolshoi are usually very expensive and sell out quickly, so make plans far in advance if you wish to get some seats. Another brilliant ballet location is the State Kremlin Palace – located within the Kremlin walls, this theatre is a spectacular place for an evening out.