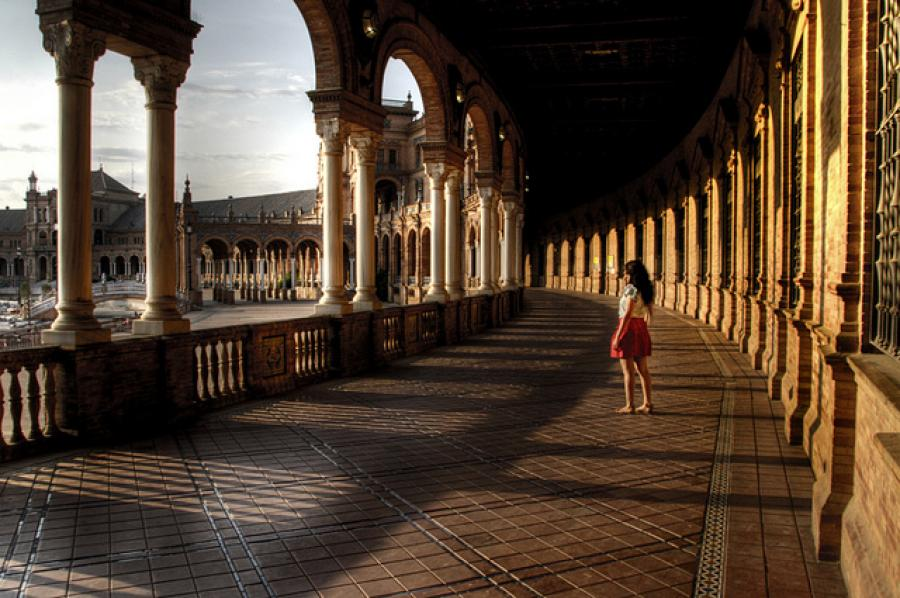 This article was written by Elise Davies, published on 9th March 2015 and has been read 4353 times.

Elise Davies studies French and Spanish (ab-initio) at Bangor University. She spent the first semester of her year abroad working as a receptionist and waitress in a French Youth Hostel in the city of Grenoble and is now doing an Internship in a housing company in Sevilla, Spain. She's documenting her year abroad in her blog! Here are thoughts on using an ab initio language abroad...

Did you take up a new language from scratch during the first year of your degree? Are you now preparing to embark on a year abroad placement in a country where that language is spoken? Are you absolutely terrified about the language barrier that will follow you everywhere you go?

If any of the following apply to you then please take my advice and worry no more!

When I started studying at Bangor University in September 2012, I decided to take on the challenge of doing joint honours French and ab initio Spanish. At the time, I was not quite prepared for the challenges that I would face but also the added reward that I would get from it, particularly on my year abroad. Being somebody who is currently doing this form of degree, I know that there are many people out there who are either struggling to speak their ab-initio language whilst abroad or are feeling very nervous and uneasy about the demands that the third year abroad has in store them. I have therefore written this article to help those of you who might be worried about the year abroad for this reason.

When I first arrived in Spain, I was excited to have the opportunity to explore a country and culture that I knew very little about. However, I am not going to pretend that I didn’t feel slightly overwhelmed at the thought of surviving with a language that I had only been studying for two years as this is naturally something that many second year students fear. In fact, I spent most of the first semester in France teaching myself survival phrases to get me by in everyday life. However, now that I am in Spain and putting my Spanish into practice every day, I have started to realise that it is in many ways more enjoyable than putting an advanced language into practice - as long as you take the right approach!

One of the main things that I have noticed since I arrived in Spain is how much more relaxed I feel about starting up a conversation with people in Spanish. This might seem crazy seeing as I have about 10 years more experience with French but I have come to realise that there are some very logical reasons behind it. I think the main reason for this is that I came to Spain knowing that my level is low and am therefore more accepting of the fact that I am going to make mistakes than I was with French. I’m sure you all had it drummed into your heads at school that the best way to learn is by making mistakes, but I would like to really emphasise how true this actually is!

Throughout my time in Spain so far, I have managed to make some hideous mistakes that have put across the complete wrong meaning and made me want the ground to swallow me up. However, I feel like I am learning faster than ever as a result of this, as I never seem to forget the correct way to say something after I have made a complete fool of myself. I also feel more and more determined each day as I make more mistakes and have people politely correcting me. I have felt so determined at times that I have found myself doing pages and pages of exercises on the subjunctive tense until I get it right! That has got to mean that the year abroad is doing something good for me!

Another thing that has really helped me motivate myself and keep going even when I am having a bad day is the way in which the people in Spain have been so supportive in helping me develop the confidence to speak and get the best out of my time here. I am spending this semester doing a work placement in a housing company in Sevilla which requires quite a high level of Spanish on a day to day basis. Although I do not have a great knowledge of the language, I have found that I have been progressing more and more each day as a result of people being so patient with me and letting me explain things in a slow and broken way until I get across what I want to say. In fact, after just a few weeks there I have found myself doing extensive pieces of writing in Spanish about certain projects that I have been working on within the company. This time last year when I was in my second year I would never have imagined being able to do this, which is one of the most rewarding things about it!

As well as in my workplace, I have seen and felt great improvements in the way in which I am dealing with speaking Spanish in everyday life such as in cafes, restaurants, shops, and even just on the streets. A lady in a café drawing smiley faces all over my food packets and telling me that I am doing a great job with my Spanish is just one of the many ways in which I have come to realise that the year abroad is not about the level that you are at with a language but about the effort that you put in. I know it sounds quite childish to be sharing something like earning a smiley face on your cookie wrapper because you tried hard, but the reason I want to tell you about it is because it shows how local people appreciate effort and a positive attitude! After all, you are not going to get anywhere by ordering a coffee in English, as you are firstly not adapting to the culture and secondly not allowing yourself to learn.

So, the main message I want you to get from this article is that you will only get out of your year abroad what you put in. I myself have had moments, particularly with Spanish, where I have been unable to communicate with somebody and have felt tempted to try out a bit of English with them. However, I know very well that this is not going to get me anywhere, so I always keep trying with the Spanish even if it means acting out my question.

As a result of my determination to improve my Spanish, I have recently registered on a private Spanish course at a local language school and am teaching English three times a week in my spare time. These activities on top of full time work have made my weekly schedule very busy, but I strongly believe that doing all of this is better than collapsing on my bed and watching TV every night when I get home from work. It's giving me the chance to speak to Spanish people more than I would just from working and is giving me extra experiences as well as pocket money. To be honest, having previously been made redundant in Spain and therefore forced to use an awful lot of Spanish in order to turn my situation around, I already know that speaking the language in a wide variety of scenarios is much more beneficial than simply speaking it in the classroom or workplace.

I could probably write pages and pages on the rewards that you will gain from going into your ab initio language placement with a positive attitude but I think that this is enough to give you some ideas as to how you can go about conquering your second year worries. Anyway, I hope this article has helped all of you ex-beginners out there realise that you have just as much chance of improving your language skills as anybody else if you take the right approach to the year abroad. You never know, you might even eventually find that it is your ab-initio language that turns out to be the stronger one!