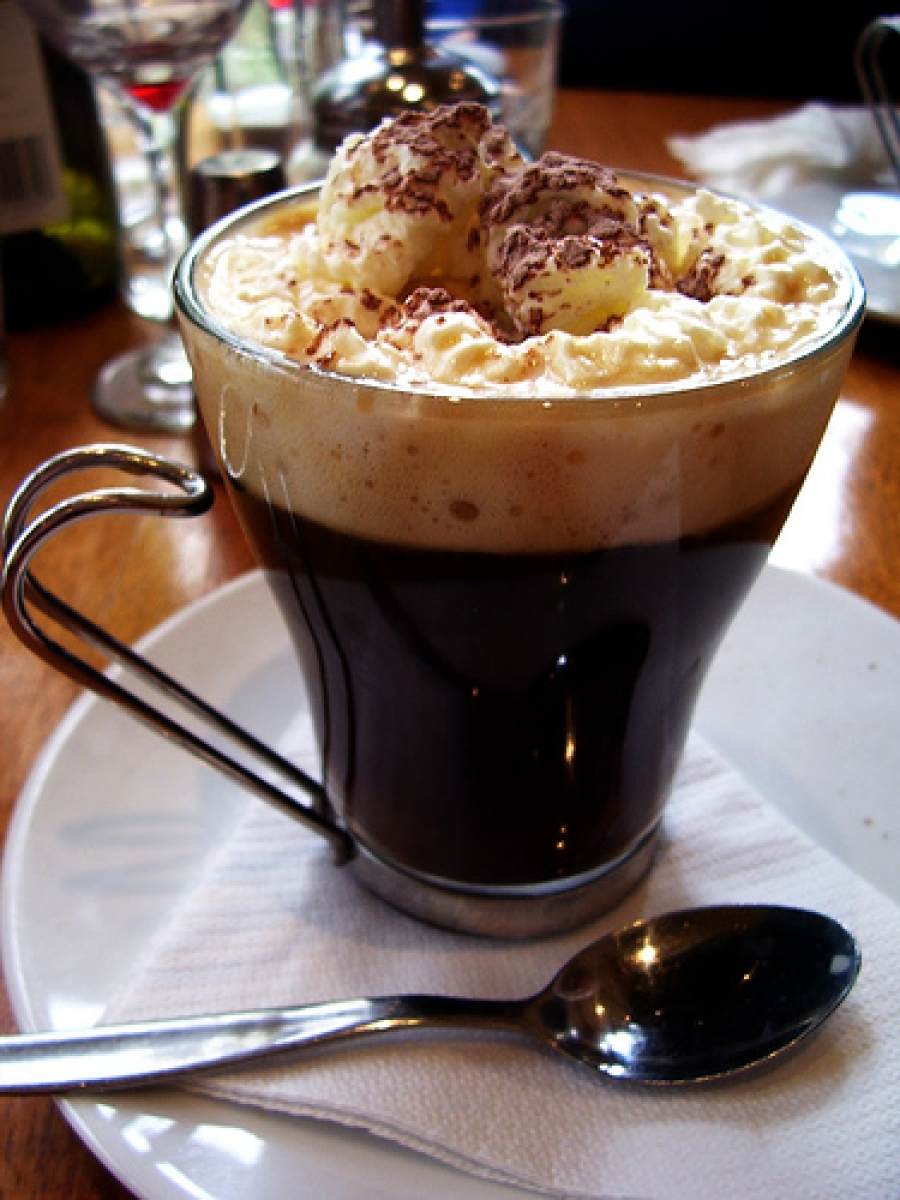 This article was written by Ellie Buchdahl, published on 8th July 2010 and has been read 41294 times.

Vienna Mole Diaries
Ellie Buchdahl gives us her secret guide to all things food, entertainment and plain lush Vienna has to offer...Ah Vienna, Vienna. Home of Habsburg palaces, of whirling waltzes, of film noir ferris wheels and slabs of cake so rich that just thinking about them makes your eyes bulge.Trust me - Vienna is THE choice destination for those of you wanting to spend your year abroad in a German-speaking country. Ignore all the snide comments from the red-black-and-gold brigade across the border - known 'affectionately' by the Austrians as 'Piefke' in reference to the old Prussian spike helmets those Germans used to wear. The accent is a challenge to start off with, but is not incomprehensible - actually, I think it's much nicer than standard German. Think sexy Irish as opposed to standard British BBC accent. And never let anyone believe Austrians are unfriendly or rude. I made some of my best friends ever in Vienna. While yes, the classic Viennese waiter can take snobbery to an extreme even the Count of Monte Cristo would be shocked by, I was never made to feel unwelcome, and was amazed at how quickly people accepted me, encouraged my dodgy German - and how keen people were to practise their English once my courage failed me.
I spent nine months in Vienna teaching in a school in the 9th district which, despite the name, is slap bang in the middle of the city. This means I saw Vienna in most of its gorgeous seasons, so I thought I'd show you my Vienna month by month. Hopefully I can give you a taste of the many sides of this beautiful city and inspire you to come and see it for yourself.

Autumn - October - November
Autumn leaves: Ride the tram or the u-bahn (Vienna's transport system is unparalleled in its reliability) to Schloss Schoenbrunn, the old imperial palace in the smart Schoenbrunn district of the city. Climb the Gloriette and look down over the most incredible view of the city. Or go to Prater, the inner-city, one-time royal park, which stretches from its famous Third Man Ferris Wheel in 3rd district (U-Bahn Praterstern) right out to the 10th and 11th districts. Alternatively take the tram out to Heiligenstadt in the suburbs and climb up into the Vienna woods. More golden leaves out in the countryside, finished with a drink of Sturm (home-made apple wine) in a Heuriger inn. A monthly transport card for most of the city costs just under €50. A semester ticket if you're a member of a Vienna university is about €140 for the whole semester. Meet a friend on a rainy day for coffee and cake - the best of Vienna's cafés are, unfortunately, not cheap. The most amazing (and pricey) cake comes from Cafe Diglas or Cafe Schwarzenberg in the first district. Order whatever takes your fancy or go for Sachertorte (slightly dry but the classic - chocolate cake with apricot jam), apple strudel, Topfenstrudel (what the Germans call 'Quark' - sweet cream cheese) or (if you're really hungry) Kaiserschmarrn - smashed pancakes with raisins, icing sugar and either apple or plum jame. Go to Cafe Hawelka after 7pm and order Buchteln, little doughnut-like cakes full of plum jam. Kleines Cafe is really lovely, though always packed, and if it's sunny you can sit in the sun in Franziskanerplatz. And you should always order the Melange - proper espresso with a touch of frothy milk. A cappuccino will get you coffee and lots and lots of whipped cream, so watch out. If the rain is really driving down, get your coffee with amaretto or rum. Most cafés stay open well into the night, serving wine and beer along with their Kaffee und Kuchen. Get everyone to go for a night out on the Gurtel - go right down Mariahilferstrasse, Lerchenfelderstrasse or Josephstaedterstrasse to find the club Chelsea and a few others. Alternatively, head for Rabenstrasse, Judengasse and Seitenstettengasse (also in the first district) for bars and clubs like Mojo (garish Austin Powers theme), Bermudabraeu and Kaktus. Go for a 'Fladenbrot' in the pub Kolar on Kleeblattgasse - dead cheap and essentially a pizza. Lange Nacht der Museen - museums are a bit pricey in Vienna - even with a student ticket, you tend to pay about €7. The Lange Nacht is in October and you pay around 11€ for a ticket that gets you into most of the city's museums until 2am. Get to know Vienna by bike - find one of the CityBike stands, stick in a credit card and pay €1 to join the scheme, then it costs nothing to pick up a bike as long as you dump it at one of the other CityBike stands in the city within an hour. 1-2 hours costs about a euro more. Really worth it. WINTER

Winter in Vienna is LONG. It starts off well (see below - the good months), then from February gets a bit tedious. Buy some very waterproof and fluffy boots, some sheepskin insoles for your shoes (you can find them in the Christmas Markets), a big coat, and a pair of tights to wear under your trousers (if you're a girl) (or maybe even if you're a boy...).

THE GOOD MONTHS of Winter: November - early February
Visit the Christmas markets: this is an absolute must. The Vienna Christmas markets open up at the end of November. As long as it's not pouring with rain, drinking hot punch out in the open replaces meeting friends in the pub, and they really are the social centre of everything in Vienna until they shut on 23 December. Punsch is a mixture of fruit juice, rum and wine and comes in various flavours from standard orange punch to plum or berry punch (with prunes or berries floating in it) to marzipan or eggnog punch (with bits of marzipan in it and topped with lots of whipped cream). There's also Jagatee (similar hot alcoholic concoction), the standard Gluehwein (mulled wine) or non-alcoholic Kinderpunsch, tea, hot  chocolate, coffee, etc. It's best to avoid the touristy Rathausplatz market or the one on Museumsplatz. Instead, head for Spittelberg (close to Volkstheater U-Bahn and Museumsquartier) or the Altes AKH market on the Uni Wien campus, while Schoenbrunn Castle market is also pretty with its huge Christmas tree in the grounds of the old imperial castle. There's also an excellent and cheap punch and Gluehwein stand outside the WU (Wirtschaftsuniversitaet, U-Bahn Spittelau). Go skiing - check out the USI website early in October (University Sports Institute). It is an invaluable resource for finding sports teams to join and booking fabulous, value-for-money ski weekends. I paid about €300 for 4 days, full board, ski hire, ski lessons, a 4-star hotel accommodation right on the slopes in a gorgeous town called Dienten, a sauna (be warned - Austrians go for naked communal sauna experience), and evenings of dancing on the table in ski boots drinking schnapps. Highly recommended for practising your German as there were no other foreigners on the trip. I also joined a handball team later in the year. There's also a train ticket deal called 'Snow and Fun' where you get a deal to some of the slopes close to Vienna, reductions on ski hire and a lift ticket for abuot €60. This costs less if you buy a Vorteilskarte for the train which is thoroughly worth it - it's similar to a Young Person's Railcard, costs around €20, and lasts for the whole year, with massive discounts. Also look at the OEBB website. The best of the slopes close to Vienna is Stuehleck in Semmering. Learn to ballroom dance in time for January - I went to Ellmayer dance studio in October. He's the guy in charge of the choreography for the famous Viennese New Year balls. There was an advert for a course where they were looking for girls to dance with the military academy boys, learn all the basic ballroom steps with them for an hour and a half every week, working towards opening the Militaerakademie ball in January clad in floor-length white dress, Viennese waltzing across the floor. They also have standard lessons for young people, but get onto the ball one if you can (and are a girl) - elmayer.at. Otherwise, there are lots of balls on offer to just get a ticket to. The Ball der Offizierer (the one I opened) is €25 for a student ticket, and all the universities have spring balls too, so look out for those. Any ball in Austria, even a school graduation one, starts with a formal polonaise then Viennese waltz. THE LESS GOOD MONTHS - February - April
In these months, Vienna turns to slush, it is bitterly cold, wet and windy. Particularly windy. The wind in Vienna can be like a knife. So here are some things to do when the weather gets really bad (or just any time)... Visit the opera: get in the queue for standing tickets at the Staatsoper by 6pm and buy a €4.50 ticket for Stehplaetze in the Parquette. Yes, you have to stand, but you get a fantastic view over the heads of everyone in the stalls and can see everything, plus there is a bar thing you can lean on. Also worth going to is the Musikverein, where you can book Stehplaetze for around €5. It is a beautiful building and if you manage to go to the Grosser Saal, you can often her the Wiener Philharmonic Orchestra. Other theatres and opera houses do student Restkarten for about €7, and if you choose a random enough time or show, you can often get a box for next to nothing somewhere like Theater an der Josefstadt. Go somewhere else - get the train or bus to Prague, Bratislava or Budapest. OK, it'll be just as cold there, but at least it's something new. Bratislava can be done in a day. The other two are fantastic and need a couple of days. Coffee and cake. Lots of it. See above. Or for a change get sushi from 'Neon'. SUMMER - April - August
It gets HOT in Vienna in the summer - so it becomes a completely new, completely different city. And it is fantastic.
Go swimming in the Danube - take the U-Bahn to Alte Donau to find the Donauinsel, where you can swim, barbecue, and visit the tacky Hawaii bars along the 'beach'. Take a train and go walking or cycling along the Danube valley. Get hold of a bike and take the train to Krems, then follow the cycle routes between the old medieval castle towns, stopping off at any Heuriger you see on the way - local wine-growing setups where you can get a glass for about 50 cents and a huge plate of cake and salami for less than a fiver. Eat ice cream from Zanoni und Zanoni on Rotenturnstrasse. Three scoops from tons of flavours for €2.50. Play crazy golf in the Danube International Centre park. So that's my very brief introduction to the city. Along with all those, make sure you look at wien.gv.at which is useful for pretty much anything. Enjoy - and waltz on!