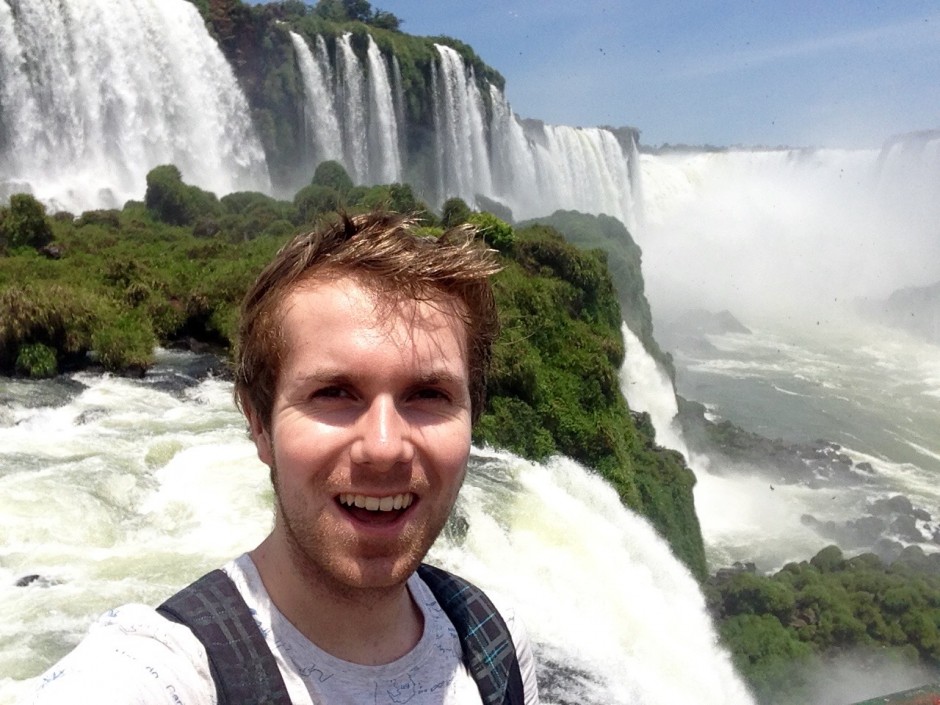 James at the Iguaçu Falls by James Landymore

This article was written by James Landymore, published on 10th January 2018 and has been read 6299 times.

James is a final year student studying Spanish and Portuguese at Exeter Uni, and recently spent 6 months working in São Paulo as part of his year abroad. Here is his article based on 10 burning questions students planning to spend an extended period of time there may have.

Being Brazil’s largest city, with a staggering 12 million inhabitants, it’s perhaps surprising that São Paulo’s buzzing, vibrant and, at times, chaotic vibe doesn’t attract much attention on the world stage. Having spent six months living and working in the city as part of my year abroad for my modern languages course, I was determined to explore all that Brazil’s hidden gem had to offer, swapping sleepy Exeter for the electric pace of a true metropolis. Prepare yourself for the city’s unique vibe with my answers to the ten burning questions everyone hoping to take the plunge and live life as a typical paulistano should ask.

1. Will I feel overwhelmed?

In short, probably. Upon arriving in the city, the sheer magnitude really can hit you. The swarming masses of people, rush of cars, and foreboding tower blocks lining every avenue can make you feel like a small fish in a very large pond. Added to the fact that English isn’t widely spoken, and taking into account the Western media’s portrayal of Brazil’s less-than-perfect safety record, your first few weeks in the city will be a crash-course in adapting to life in a Latin American megacity. My advice is to remember that even Brazilians moving to São Paulo for the first time find it intimidating, and congratulate yourself for throwing yourself in at the deep end. Before you go, research what support you may require if you suffer from anxiety or other conditions related to mental health that could be compounded by being in an unfamiliar environment. From personal experience, taking a breather in the lush greenery of Ibirapuera Park can offer a refreshing break from the madness of the city streets. Even better, rent a bike and discover the park’s secluded trails, swapping the concrete jungle for a real one.

I found my paid internship at a translation firm through my university’s careers website, so I would recommend that as a first port of call; a Brazilian company with experience employing British graduates can really help you feel settled in the city. Additionally, Global Graduates' own job pages, as well as AIESEC, are excellent places to find your ideal placement. Make sure you take a look at the Foreign and Commonwealth Office’s advice on living in Brazil to find out about visas and other paperwork you may need when working in the country. In terms of a work environment, expect less formality and more unpredictably than back home, but remember Paulistanos have a reputation in Brazil for being the hardest workers in the country. I found this to be pretty accurate, with the famous phrase work hard, play hard ringing true!

Cars are king, and thankfully Uber is cheap, safe and available round the clock. However, the most cost-effective method for covering large distances is the clean and modern metro system, which serves the city centre and is being expanded as you read this. Typically, progress has been plagued by budget problems and delays, yet in the meantime buses provide a good substitute for travel to remoter parts of the city. That said, living and working in São Paulo, you’ll most likely not need to leave the centre, as the periphery is mainly home to poorer residential areas. Whilst walking alone at night should be avoided, I felt comfortable strolling around during the day, just making sure I kept to busy areas, dressed in inexpensive clothes, and kept an eye on my belongings.

4. Should I pack a beach towel?

Sand, sea and solzão? Maybe in Rio, but São Paulo lies an hour or two away from the beach, so unless you’re lucky enough to have a swimming pool in your apartment block, maybe purchase your sun cream once you’ve planned a weekend away. Weather-wise, the city will throw everything at you, sometimes all four seasons in one day! From earth-shattering lightning storms to sizzling heatwaves, São Paulo always keeps you on your toes. Roughly speaking, winter and summer are reversed in relation to the UK, however I have distinct memories of it hitting 27 degrees in July, showing just how a Brazilian winter compares to ours! My top tip? Invest in clothes you can layer easily, adding or removing according to the weather’s inevitable mood swings.

No! It is a good idea to have some temporary accommodation sorted before you go, perhaps booking a couple of weeks in a hostel or AirBnB to give you the necessary breathing space to find somewhere permanent. When renting in São Paulo, location and security should be your top priorities, with the hipster enclave of Vila Madalena being a favourite amongst young people, thanks to its cool bars, independent shops and fantastic public transport links. Other districts such as Vila Mariana, Pinheiros and Paraíso are well-suited to anyone wishing to explore the nightlife around Avenida Paulista, and is served by several metro stations and good bus routes. Always look around an apartment before renting, and ask questions about rules and regulations. After a few days trawling through sites such as EasyQuarto and the multitude of Facebook groups for landlords and tenants, you’ll be well on your way to renting like a pro. Expect to pay a minimum of 900 Reais a month for a single room in the centre of town.

Eclectic. Being the cosmopolitan and cultural hub of one of the largest countries in the world, almost anything is on offer here. From a chilled night with friends sharing beer and bar snacks at one of Vila Madalena’s many botecos (my favourite was the quirky and inexpensive Mercearia São Paulo), to partying well into the morning at world-class clubs (D. EDGE is the place to head for lovers of electronic music), the night is really whatever you want it to be. For LGBT+ folk, Rua Augusta is the place to head for an unforgettable time, and may well challenge your stereotypes about what it’s like to be part of the gay community in a Latin American nation. As with any country, get clued up on Brazil’s drug laws before taking or buying, as penalties vary. Above all, embrace the unpredictable nature of a São Paulo night out, going where the mood takes you and enjoying every minute of the journey.

What they lack in visual charm, São Paulo’s tall buildings make up for in the incredible views they offer, somewhat reminiscent of Manhattan’s cityscape vistas. Head downtown to the roof of the Édificio Itália for a birds-eye view, or brave the hike up Pico do Jaraguá to see the city in all its magnitude from the mountain’s verdant slopes. Packed with museums, try MASP and the Pinacoteca if you’re an art lover, whilst the Centro Cultural Banco do Brasil (CCBB) offers an eclectic mix of exhibitions, with free entry making the experience all the more enjoyable. The music scene is equally rich, with up and coming bands rubbing shoulders with a plethora of Brazilian and international stars at various venues around town.

São Paulo is a major travel hub, meaning you can access a huge range of destinations across Brazil and beyond. During my time in the city I travelled to Rio, Brasília, Foz do Iguaçu, São Paulo state’s coast (Litoral Paulista) and Argentina’s capital, Buenos Aires. Boasting two major airports (three, if you count nearby Campinas), as well as several interstate and international bus terminals, a getaway from the hustle and bustle of the city can easily be arranged. If you decide to embark upon a road trip, remember to research what documentation you’ll require. I found it very interesting to compare the lifestyle in Rio, São Paulo and Brasília, learning how the country’s continental size makes it hard to come to assumptions about its character. If I had the chance to return to Brazil, I would make it a priority to visit the north-east, where the presence of Afro-Brazilian culture shines a light on the country’s diversity.

Being a question many travellers and year abroad students ask me when I mention my time in Brazil, it’s important to emphasise that I myself never had an issue with crime whilst in the country. Take the usual precautions you would in a large city, and always be aware of the environment around you. If something doesn’t feel right, calmly leave, or find a café or shop to walk into and assess the situation. Talk to locals, taking their advice regarding what areas of town are off-limits. Check the FCO’s tips on safety in Brazil, and follow their social media accounts to receive travel alerts. It’s worth mentioning that in many ways São Paulo is a very different city to more infamous ones such as Rio, with the favelas mostly located away from the centre, where the majority of middle class inhabitants live and work. In my experience, using common sense and following official advice really helped to make my stay safe and enjoyable.

Far too much to put into words! From increased independence, to a hunger for new experiences, living and working in São Paulo gave me a different perspective on the world, leading me to adapt to a vast range of different – and at times challenging – situations. Making friends in a city can be hard, and all the more so if you’re using your second (or even third) language. Fortunately, most Brazilians I met were patient with me as a learner of Portuguese and curious to find out more about my life in Europe, and why I chose to come to Brazil. If you throw yourself into things, and learn to say yes a little but more, you’ll reap the rewards. What you get out of a year abroad is intrinsically linked to what you put into it, and by choosing to spend part of it in a city such as São Paulo, you’ve already taken the first step to embarking on an adventure that undoubtedly will stay with you forever!