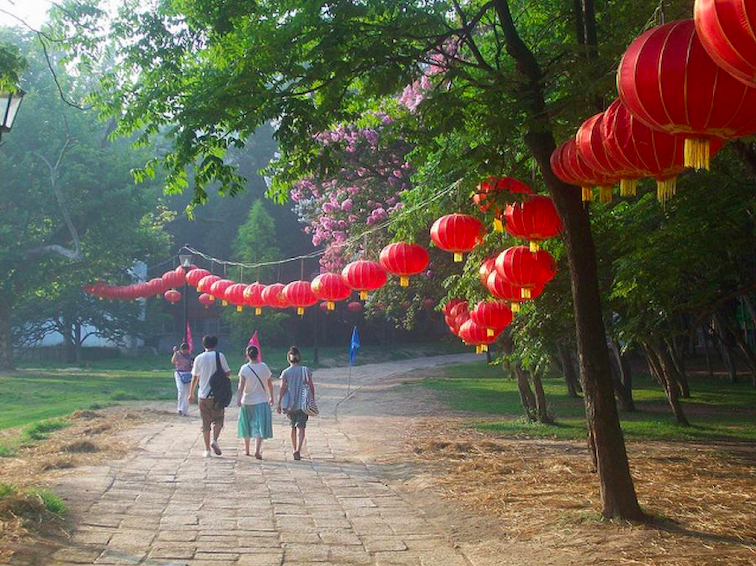 This article was written by Victoria Leigh, published on 18th August 2016 and has been read 4754 times.

Victoria is 28 and is a recipient of a 2016 British Council Generation UK Study China scholarship. She is studying Chinese at Qingdao University for a semester after graduating in Modern Chinese Studies in 2014 at the University of Leeds.

1. It’s pretty chill in Qingdao
In comparison to the major cultural and economic centres of Beijing and Shanghai respectively, the port city of Qingdao (or Tsingtao as you may know it) is a little less well-known. Thus, in Chinese terms, far fewer hectic hordes of people to contend with out and about.

Impeccably situated on the east coast of mainland China right between Beijing and Shanghai, Qingdao is the biggest city in Shandong province in Eastern China, with the provincial capital being Jinan. Home of famous philosopher Confucius (the city of Qufu), and one of the few wine-producing provinces, the lifestyle here is of a different, almost more Mediterranean pace to the huge hubs China is known for. The joke goes that Qingdao has not yet finished building its subway system because the locals only do a little work, then drink so much beer that they just go home for a siesta and don’t return until they next feel like it…

2. Accommodation and all that
If, like me, you are a student on the Generation UK Scholarship programme, the accommodation offered is that in the ironically named &39;New Building&39;, which has your basic amenities in your shared room such as hot running water, a bed, a desk, and your new roommate! For party animals, you will be glad to know that there is no curfew. Your washing will either be done by hand, or in the laundry room in Minxing Building - the newer dorm across the car park - which also houses the International Student Office.

3. It&39;s all &39;Qingdaospeak&39; to me...
As with the rest of mainland China, standard Mandarin Chinese is the official language of Shandong province, and everybody you meet outside of class should be able to speak and understand it. However, if you are out and about in Qingdao, and hear something similar to Mandarin but you find that you can&39;t quite follow, don&39;t be alarmed! It&39;s just the local dialect Qingdaohua. Spoken at a rapid pace by the locals, it&39;s relatively unintelligible to the untrained ear.

4. Hao hao xuexi (‘study hard’)
Qingdao University’s main campus for foreign students is situated in the district of Shinan - pronounced ‘Shuuh-nan’- and contains the German-style Old City from their previous occupation of Qingdao which began in the 1890s, which means that cultural activities and interesting places to see are only a bus ride from campus. The bars are only fifteen minutes’ drunken stumble away too, where Tsingtao beer is regularly served!

Classes start at 8.30am and finish at 12.30pm, with optional cultural classes such as Tai chi, calligraphy, and Chinese movies taking place in the afternoon. Students from all over the world arrive here for a semester, a year, sometimes longer, and you will surely find your place among American, Czech, Kiwi, Hungarian, Ukrainian, Korean, Japanese, and German students, amongst many others.

5. Beer and beaches, surf and turf
A big attraction here is the Qingdao Beer Museum (did I mention booze is a big thing in Qingdao?) With a free freshly brewed half-pint at the end, it’s not to be missed for beer connoisseurs/students. The Qingdao International Beer Festival also takes place in August, so it’s almost like a summer Oktoberfest in China!

However, there are things do to besides drinking! Such as? Well, in summer, there are many mountains to hike (Fushan and Laoshan are the two major mountains), and many beaches to barbecue and sunbathe on, so it’s an ideal place for those who seek adventure, yet also desire a more leisurely pace of life. There is much shopping to be done in Taidong and Technology Street, so the shopaholics amongst us will not be lacking. The city is also a location of huge historical significance, with the Siege of Tsingtao and the May Fourth Movement both turning points in the city’s past as the international metropolis you see today.

6. All in all
In the sprawling People’s Republic of China, Qingdao is a stand-out for sure. Combining leisure with culture in equal measure, compared to Shanghai or Beijing it is small, yet perfectly formed. Being a student here is ideal: the great outdoors are close by, the coast is a stone’s throw from campus, and the atmosphere here is relatively laid back, so you’re winning on all fronts!

Just maybe take it easy on the free-flowing beer!