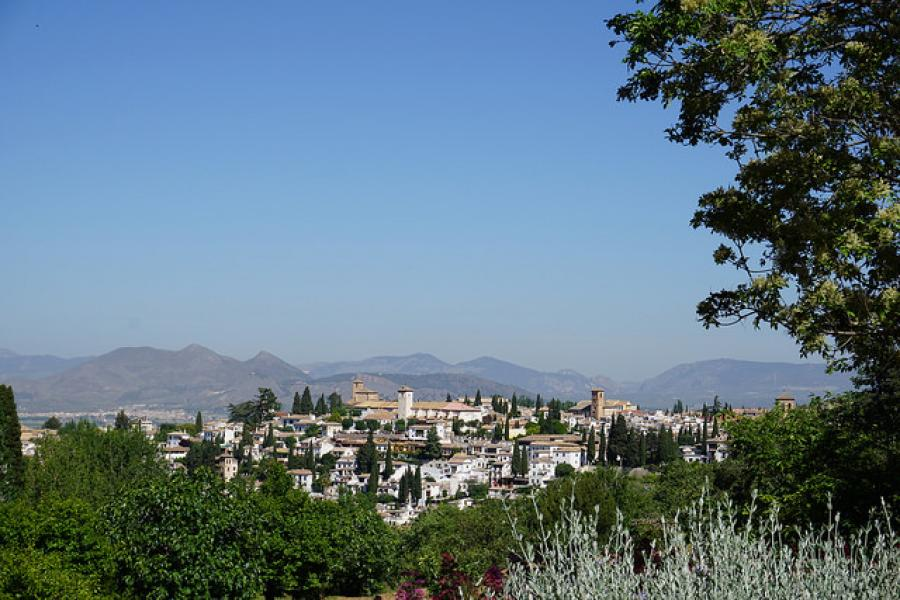 This article was written by Alice Whelan, published on 22nd July 2015 and has been read 5015 times.

Alice Whelan is a French and Spanish student at Cardiff University and has just finished her Year Abroad in Chambery and Granada. This is her insider guide to Granada, from where to live to how to find a gym!

From February until July I was at university in Granada, southern Spain, for the second part of my Erasmus year abroad. Having travelled and seen Spain's other provinces and varied landscape, this south- western corner was unfamiliar to me, bringing a new dimension to the experience.

Granada is the city with the highest number of Erasmus students, and it is easy to see why. This beautiful city is filled with every city element which anyone could wish for, hand in hand with Granada's personal charm, and not overwhelming in size. Whilst wandering the streets, numerous squares (my favourites being Plaza Bib Rambla and Plaza Nueva) appear with cafes and tapas bars hosting a mixture of locals, students and tourists. The Arabic quarter situated off Gran Via is bursting with character as its jewellery, bags, purses and lanterns overflow onto the streets. Maintaining Spain's more modern feel, the high street shops stretch down Isabel Reyes de los Católicos yet with minor streets continuously branching off back towards Plaza Bib Rambla and towards Plaza Trinidad.

Whether being a tourist or merely wanting to escape the city feel and view the city from further away, walking up Albaicín's cobbled streets leads you to multiple 'miradors', or viewpoints, with the most popular being mirador San Nicolas with several bars and cafes sitting above the city overlooking the Alhambra palace. The Turkish Baths found just through Plaza Nueva is the perfect (and romantic) treat (approximately €25) for a relaxing spa day in the beautifully decorated baths.

As well as there being everything that you could want from a city, it is extremely cheap here, making it ideal for student living. Granada is the home of 'tapas', meaning that wherever you go, every time you order a drink (on average costing €2) you will receive free tapas with it, and more often than not, a lot of it. This makes living and socialising guilt free and and lot cheaper!

To indulge in the Spanish culture here, going to Le Chien Andalou bar just off Plaza Nueva to watch a Flamenco show is a must! Visiting the gardens and old buildings of the Alhambra Palace is stunning with incredible views over the city, but if this involves too much walking for you, walk up to San Nicolas mirador and have a drink opposite the palace. Bullfights still go on in the grand Plaza de Toros in May and June, if you really want to experience Spain and their idea of art and performance.

One thing to remember with Spain is the siesta and how everything consequently happens about 3 hours later than England. Most shops will shut at 2pm until 5pm and then stay open until 9pm. Therefore the evening meal or tapas is at its busiest at 10pm, clubs don't open until 2-3am and you return home at 6am!

Even though Granada has its own airport 20 minutes from the city, it's best (and sometimes only possible) to fly to Málaga Airport. This is the main airport for this southern stretch of coast and inland cities. Once at Málaga you can catch a coach with the company ALSA which stops right outside the exit of the airport and takes you directly to Granada, with one stop in Málaga city centre at the coach station. On the coach this journey to Granada's coach station takes just under 2 hours and costs €17 if booked online, and €13 if bought from the station till/self service machine or on the day (but obviously you take the risk of the bus being full if you don't book).

If you miss the coach from the airport to Granada, you can similarly get the shuttle bus of Málaga from the airport into the centre (stopping at the city's coach station) and from there get a coach to Granada. This costs merely €3 and takes approx. 15 minutes.

Accommodation is similarly very cheap in Granada, with a spacious flat usually with a terrace or balcony costing on average €200-250 a month, and if you want to be right in the centre of the city (but with a further uphill walk to university campus Cartuja) you'll pay more towards €280-300 a month. Rent is normally paid cash in hand to the landlord - there can sometimes be tricky situations with your deposit being returned by your landlord when you come to leave the country so be aware of this, it is a frequent problem throughout Spain! Available flats are incredibly easy to come by, so you can wait to find somewhere to live once you arrive.

Granada University is hard. Firstly, the campus, Cartuja, is at the top of a very steep hill, but fear not there is a bus! Regarding the academic side of things, lectures, like in most European countries other than the UK, are 2 hours long and twice a week (making a standard timetable of 16 hours a week). Note that being a non-native Spanish speaker at this university makes no difference to the lecturers here - there are no modules designed for Erasmus students, nor is the marking or sharing of module information more lenient or available.

Upon arrival you are encouraged to trial as many modules as possible over 2 weeks, but this means that by the time you go to your appointment to enrol, these modules will be full, so don't spend long trialling modules! I would definitely stick to 1st Year modules and check the 'UGR Tablon Docencia' online for the module outline to avoid problems nearing revision.

Even though this area of Spain is said to be slightly more cut off from the rest of the country with fewer road or rail connections, there are still many cities which are amazing to explore. Even though there are main railway systems, it is easiest to travel by coach.

It is only €18 to get the coach to Madrid which is my favourite city in Spain! Even though it's a 5 hour coach journey, if you leave early morning (and sleep on the coach if you wish) you can be in the great capital city by noon! If you go to Madrid I would recommend that you explore the Malasaña area.

Being close to the coast means that from Granada is it easy to get to coastal towns such as Nerja, Torox and Marbella. Nerja is extremely pretty, 1.5 hours by coach and has a great stretch of sandy beaches and numerous bars, cafes and restaurants.

Other larger cities which are definitely worth visiting are Seville (although try and visit here before April as this is when the city really starts to heat up, reaching 36 degrees by before Easter!), Córdoba, Antequera and Cádiz. If you're willing to fly (definitely worth it and can be as low as €70 return!) visit the famously bizarre and exciting Barcelona.

7. Things I wished I'd known before

1. How freezing it is in the winter!
I arrived in February with mostly summery clothes and the odd jumper, but there is no cental heating in any of the flats, nor carpets, and it gets incredibly cold!! Make sure you have a thick duvet and/or blanket, coats, warm clothes etc, as well and the very summery clothes for April/May onwards!

2. Don't rush finding a flat.
There are so many available flats, especially at the start and end of academic semesters when loads of students arrive and leave. I would recommend living near Plaza Nueva if possible, even though the flat will be a little more expensive, but still under or on €300 a month, as this is a very central location even though it means a longer walk or bus ride to the university campus Cartuja. Camino de Ronda is a popular area with hundreds or flats. They may be bigger but it is a much longer walk from the centre (where you will spend most of your time!) and also from university. Regarding the contract and landlord, there can be difficulties getting your deposit back, so make sure you go through the contract carefully and have the landlord's full name, address and phone number!

3. You won't struggle to find a gym
Gyms are extremely popular especially with the younger generation in Spain, and there are quite a few gyms to choose from if you want. BeOne, behind Plaza de Toros, and next to a Mercadona supermarket, is approx €39 a month, which may seem more expensive than some, but is only a year old, has a huge gym, 2 swimming pools, sauna, paddle tennis courts, sunbathing area and a cafe. It's very easy to spend an entire day there!

I managed to avoid opening a Spanish bank account which was extremely helpful and economical time-wise. I already had a Santander (student) account in England, but I would recommend opening one even if you don't already, for going to Spain. With Santander, you can withdraw money for free from any Santander ATM in Spain,and there are loads of them everywhere so they are easy to come by. Just make sure to ask for your withdrawal in Euros and not Pounds Sterling when asked as one of the options. This avoids all fees and extra charges withdrawing money. Similarly, I got a Thomas Cook Cash Passport which you load Euros onto before leaving, and then can use to pay on card in shops, restaurants, supermarkets etc for free when in Spain, once again avoiding charges.

I would highly recommend Granada for student living and wish I could repeat my semester there! For Erasmus students, if going to university I would be aware and cautious of the potential/probable level of difficulty and harsh marking scheme. On the other hand, if teaching or on a work placement for your semester or year abroad, you will have the best few months you could ask for! The climate is great as long as you're prepared, and the surrounding area is very interesting to explore and gives you a much better feel of Granada itself too.

What's better to do first - accommodation or bank account?

Ideally, you'd get on with arranging both as soon as possible but you might need to use your UK cash card to get money from a bank machine for a deposit or take cash with you from the UK. Obviously us...