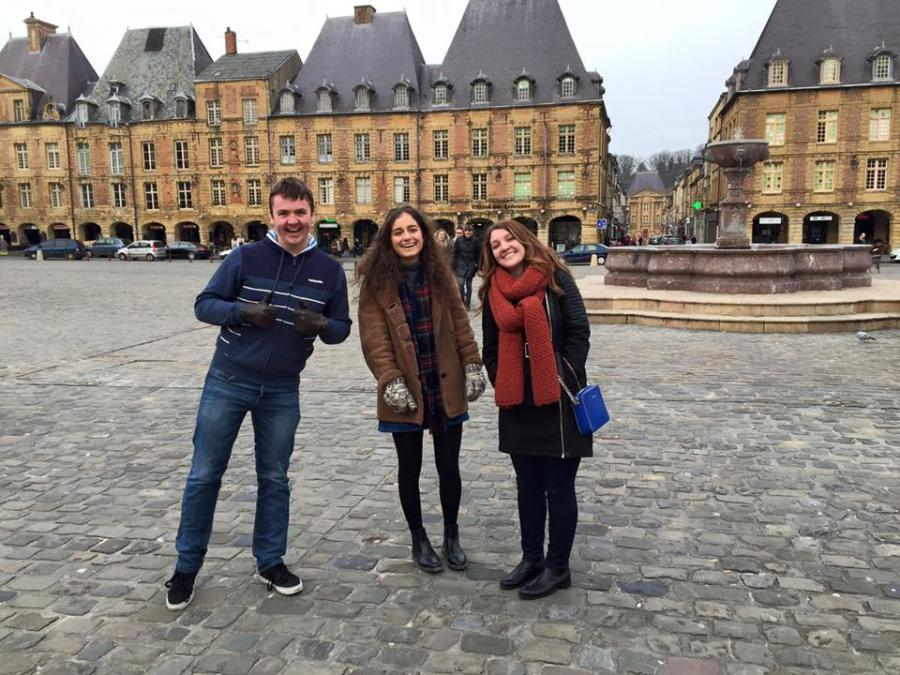 This article was written by Grace Marsh, published on 4th April 2016 and has been read 3221 times.

Grace Marsh studies French and Linguistics at the University of York. She is currently on her year abroad working as an English Language Assistant in The Ardennes in North East France, and blogging about her experiences. Having been placed in a small, countryside town, she shares her tips about just how beneficial it can be.

When I received the letter detailing where I had been placed for my assistantship I was admittedly disappointed. Having found out a few months earlier that I had received my third-choice region, Reims, and not Montpellier, the region of my year abroad dreams, my happiness levels weren’t exactly sky-high. A small town in the French Ardennes couldn’t have been further away from Montpellier if it tried. In fact, I was literally on the complete opposite side of the country. Having had no luck on Google Maps trying to drop the little orange man on anything very interesting, I was a little nervous about spending seven months of my life there.

Of course, I needn’t have worried, and also figured out that perhaps I just wasn’t looking in the right place on Google Maps… I’m certain that being placed in a small town in the countryside has worked out to be hugely beneficial for me and here are the reasons why:

1. You really do have to immerse yourself in the language.
Yes, I teach English to my students but apart from that, I speak French in pretty much every other situation. Tourists do not venture to my town and so supermarkets, bakeries, people that live there, all living things, do not automatically assess if I’m a tourist and then proceed to talk to me in English, like I have experienced in several French cities. Instead, the conversation starts, continues and finishes in French (albeit sometimes with little bits of English in-between when whoever I’m speaking to wants to practice their English!).

2. People are genuinely interested in finding out about you and where you come from.
Of course, this applies to pretty much every language assistant but I feel it’s especially interesting to people living in small towns that don’t see many tourists. Several of my students have never been on a plane, or even left France and therefore really do appreciate getting to know someone from another country. You might think your little English hometown is boring but to your students, you couldn’t be more interesting! I’ve never seen so many excited faces when showed my students where I went to University. Miraculously, they were very impressed with the University campus… I stumbled across a lovely little bookshop once and ended up staying there for twenty-five minutes chatting to the owner and a random lady about England, French cooking and English football teams. It amazed me that the owner knew my hometown team, Leeds United – I had no idea why or how. It was great fun and it’s situations like that one that really make your year abroad so memorable.

3. You see someone you know every time you go out.
For some people this will not be a good thing but I really love it. I live next to the school meaning I see students I teach every time I leave the building as they walk to and from the school gym. When I go food shopping, to the Post Office, or for a run, I always see a teacher, student or a friend. You stop, have a little catch-up, speak a little French and carry on with your day. Students will love it when they see you in town and pluck up the courage to say “hello” to you and you say hello back. It’s the small things…

4. Life is so much cheaper.
Rent, food and most importantly the price of beer… I have found that living further away from a big city and basically in the countryside means that everything is significantly cheaper for me than for my friends living in bigger cities. It’s common knowledge that cities are more expensive but the price differences I’ve found in France at least really are significant. For example, a large beer in a medium-sized city in my region will cost you around €7/8 euros, whereas the same beer bought in my town or the neighbouring ones will cost around €4. It doesn’t seem like a huge difference however it all adds up. This is especially noticeable when it comes to rent – friends in Paris were paying up to €1,000 a month for a flat in Paris and finding themselves with not so much money left at the end of each month. As my living costs are fairly low, I’ve been lucky enough to save my money and do lots of travelling, which has really made my year abroad even more memorable. Never again will you have the time and money to travel like you can as an assistant so really do make the most of it.

It’s nice to take a step away from city life.

5. For some people, coming from a big city to a small town doesn’t sound that appealing.
I come from one of the biggest cities in England and currently live in a town where buses stop at 6pm and don’t run on a Sunday. At first it proved difficult to accept but you just make the most of what is available to you. At least once a week I take the train to the next town to meet up with other assistants and go to bars, events, for dinner, etc. There will be many assistants in your region and plenty of opportunities to leave the town. You could visit bigger towns or cities by train every weekend if you wanted to, seeing as most places (in France at least) are fairly well connected. It sounds stupid but going to a big city almost feels like a special occasion here and it’s nice to have it as a way of taking some time out from a smaller town environment.

Life slows down a bit and it feels like a much-needed rest.

6. You get used to things closing at silly o’clock and walking through a ghost town at lunchtime.
It’s annoying at first having to tactically plan when to visit the bank or even the supermarket because they close for two hours over lunch, but you kind of learn to appreciate the reason being because people go home to eat with their family. This is a bit different than for most of us used to having a half an hour lunch break at work to demolish a sandwich and run several errands at the same time. Equally, not having everything at your disposal and having to order things online has definitely made me think more about what I’m buying. In England, it’s so easy to go on constant shopping trips or spend far too much money on buying food out but you can’t really do that when you only have limited options around you.

7. You’ll be faced with lots of strange but wonderful opportunities.
I didn’t really expect to come on my year abroad and be asked to interpret in front of national press for a Saudi Arabian Prince who is investing millions in the local football club. Or spend three hours watching 10-year olds play handball for 3 hours, or even go to a weekly pilates-boxing-hybrid-type-thing exercise class with a group of middle-aged women. There was even a Disney carnival here last week and there’s a Medieval Festival happening soon. Sometimes it may feel like there is nothing really going but most of the time you’ll be amazed and happy that such random things are happening.