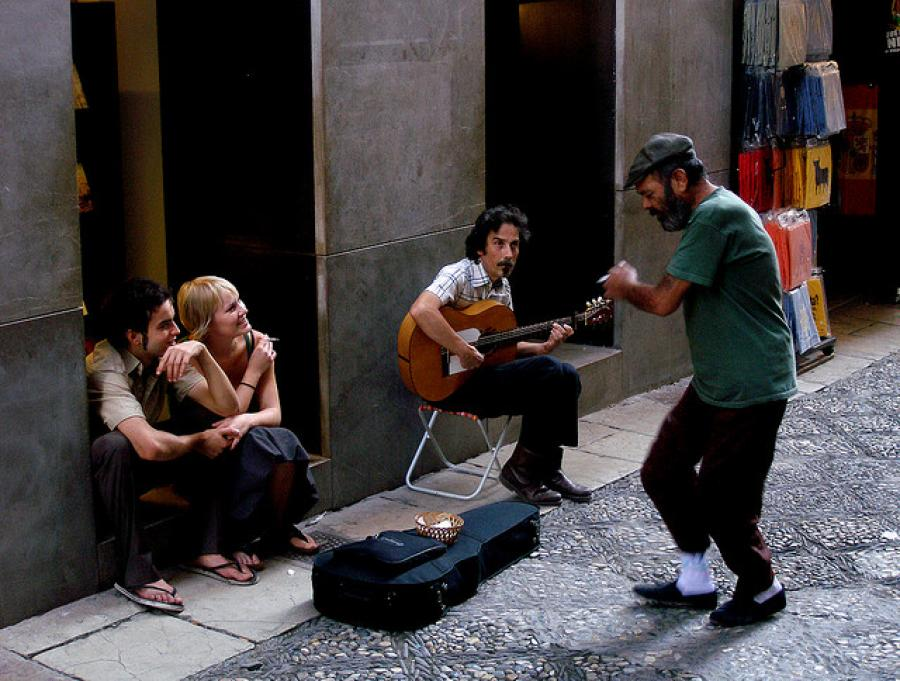 This article was written by Global Graduates, published on 5th September 2014 and has been read 3645 times.

Spain Granada Living and working in Spain Spanish Internships Durham Uni Andalucia
Sophia Smith-Galer studies Spanish and Arabic at Durham University and is currently doing an internship in Granada, Spain, for a company that runs cultural tours of the city and organises Erasmus+ placements for European students. In October, she will head to Beirut to study at the Institut Francais du Proche Orient. To read more about Sophia's year adventures abroad, visit her blog or follow her on Twitter. Here she tells us about her first steps into the world of flamenco...

Before I decided to study languages at university I had long flirted with the idea of going to music college to study singing full-time. However, the incessant reminders of adults that 'there's no money in it', or 'it's all about luck' slowly paved their path in my mental process and decided for me that now was not the time for music but for extending my academic learning.

However, at university I've still kept my music going, and now that I'm well into my third year abroad in Spain and Lebanon I thought 'Why not keep it up abroad too?'. I am now back in London, fresh from the end of my flamenco course in Granada, Andalucía, and here are some thoughts about combining your musical passions with your language learning.

Firstly, I should point out that I've long been a fan of flamenco, and it is the reason I fell for Spanish as opposed to French or Italian. If flamenco isn't your thing then obviously you will probably steer away from it on your year abroad, but if you are based in a city like Granada, Seville, Cordoba or Cadiz, then avoiding flamenco is probably like trying to avoid the plague in 1665. It is entwined with the cultural identity of Andalucía and the driven, frank character of its people.

Anyway, if you read my other post for Third Year Abroad about my internship and volunteering in Granada, you will understand that, though my time in Spain is fairly limited, I certainly wanted to take full advantage of it. So, to bulk out my five week internship, I then did a three week flamenco course at Escuela Carmen de las Cuevas. There are many flamenco schools dotted around Spain, but I chose this one because of the freedom it allotted me; it offers a huge variety of courses, including Spanish lessons if you would like them. I decided to do a three week singing course and also a three week history course, which covered the school's entire history syllabus.

At the end of my three weeks, I achieved far more than I had at first anticipated. Yes, I had learned plenty of songs as I had expected - two weeks of tangos and one week of bulerías - and left Spain with a definitive knowledge of flamenco's historical trajectory. However, I fell in love with the camaraderie of the school and its international atmosphere; set in a cave-like building in a narrow street somewhere in between Sacromonte and the Albaicín, students of all skills and all nationalities were hyperactively talking, singing, dancing, clapping and laughing with each other all day long. I started to get invites out to flamenco festivals and bars, and would walk past a flamenco callejero show in Plaza Nueva and be waved at by one of the performers, who also happened to be my singing teacher.

On another note, bear in mind that flamenco's exclusivity to the south means that you will pick up the local accent; dropping an 's' in the middle of a word now makes total sense to me, though it does make me sound a little bit like a toothless old Andalusian basket-weaver.

If you are well-suited to the bohemian life, then there is no better way of learning a language than getting stuck into the local music scene. If you aren't musical but adore flamenco por afición, then I couldn't recommend my history course more. My teacher was an elderly raving leftist, anti-monarchist and, above all, witty anecdotist and incredible story teller. Combined with his never-ending knowledge of flamenco, it was his fantastical narration of the art form's rough-and-ready birth and life which has given me my warmest memories of my time in Granada.

Flamenco isn't only found in the tourist tablaos or the hipster nightlife of bars like Le Chien Andalou, but in the fabric of Granada's people. A walk through the gypsy quarter will be a soundscape in itself, as many leave their front doors and windows open and you can peer into the houses and see entire families singing around a guitar. Equally, at 3am, as the Spanish reach their drunkest hour, you will see men and women pour out of clubs into the streets, stamping, singing and dancing to an impromptu wonderful, albeit boozy, flamenco spectacular. I already came to Spain with a love of flamenco and Granada only fanned the flame for me, but if you feel like it is something you would want more education in then I thoroughly recommend a course at a flamenco school, chatting with the local singers, dancers and guitarists and throwing yourself into a dramatic, stunning and thoroughly Spanish art form.