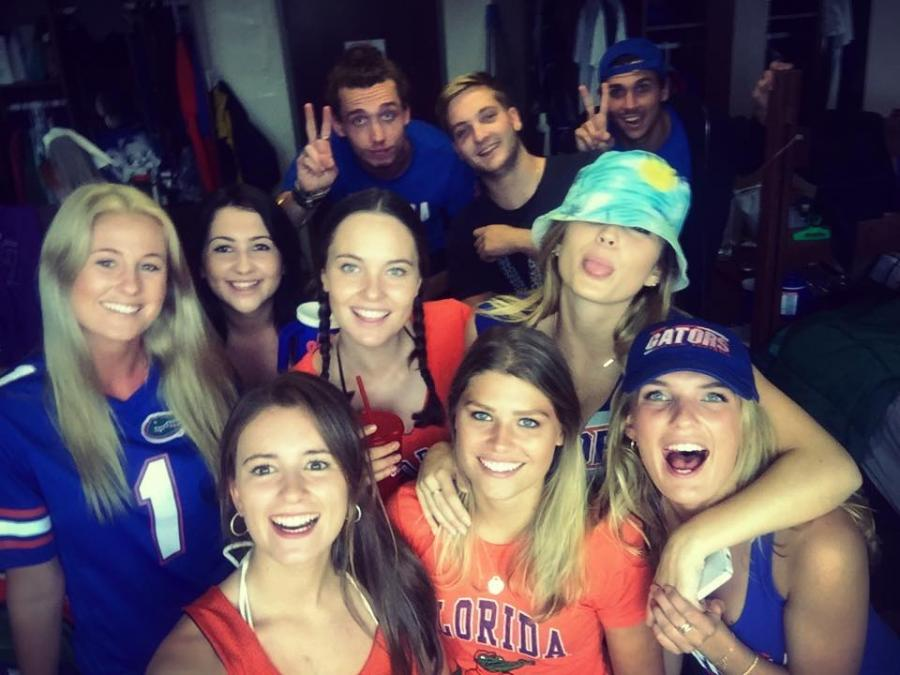 This article was written by Daisy Guy, published on 31st January 2016 and has been read 7986 times.

One of the main things that stood out to me when I arrived on the University of Florida’s campus, was that every other person I saw was wearing some form of Gator merchandise (The Florida Gators the name of the university’s sports teams). The full extent of the patriotism towards the Gators was not to be fully realised until I attended my first American Football game. The university’s stadium holds 90,000 people, the majority of which will be dressed in the orange and blue colours of the team, all cheering and vying for a win. This was a completely new experience for me, a university football game back home in England would hopefully get around 50 maximum spectators, however college football in America is what I soon learned to be on a completely different level. Gainesville, where the University of Florida is located, is a small town and I have been informed that without the university and without the Florida Gators football team, it would cease to be a town at all. The games are supported by a huge range of people, and I loved the sense of community, support and inclusivity the games give to everyone; I have seen everything from baby girls dressed in Gator cheerleading outfits to old couples dressed head to toe in orange and blue. 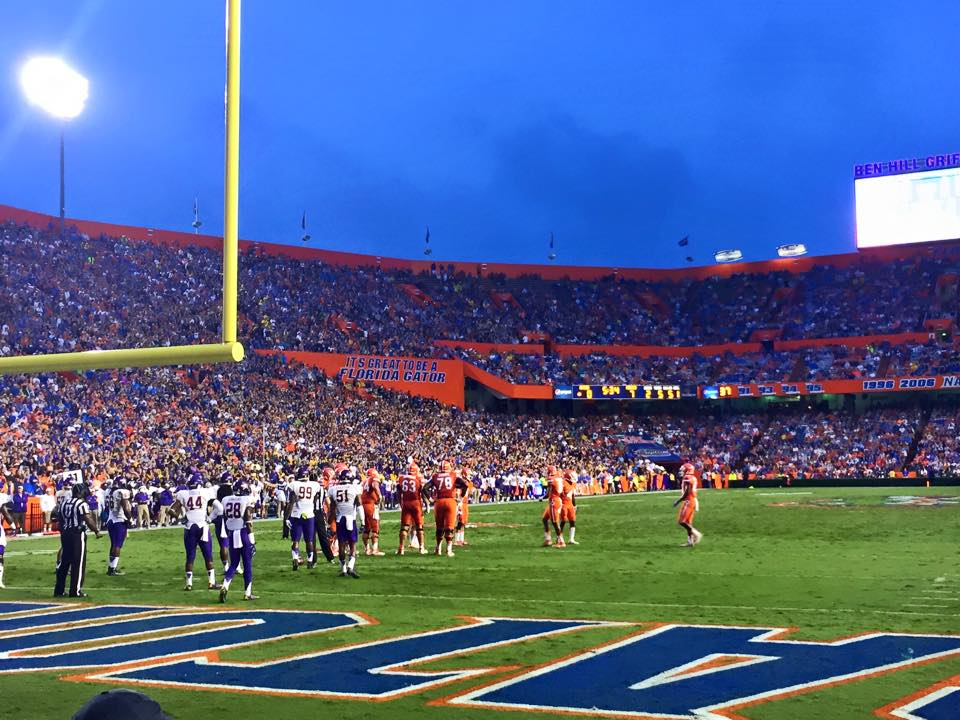 Aside from patriotism towards your particular college, another key part of America I have learned about is their patriotism to their country. The American flag can be found everywhere. Big, small, in a picture, as a flag, you cannot walk for about 5 minutes without catching a glimpse of it. In New York, flags lined the busy streets, in Kansas City, flags adorned posts placed in front gardens, in Florida, large flags hang in the stadium, in the gym, in the swimming pool, in the bars, in the classrooms etc. The majority of Americans thus are extremely proud to be American and they are not afraid to show it. An especially moving moment for me was during my Sports Media class on 9/11 of this year, where the class watched a documentary showcasing the events of 9/11 in the media. This may sound dramatic, but you could feel the overwhelming sense of emotion and care for this country that the documentary emulated within the students and staff.

Not only have I experienced a great sense of diversity amongst the University of Florida campus, and despite the fact I have only visited 3 states, I can already tell how diverse the whole of United States of America can be. Everyone tells you that each state in America is like visiting a new country, which I have now discovered to be extremely true.

America is BIG. It takes about a million hours to get anywhere you want to go.

I eat most of my meals in one of the University’s dining halls where they serve pizza 24/7. Some of the most interesting food I have come across there is fried chicken with waffles (and syrup), corndogs, grits, biscuits (basically scones which you eat with breakfast), ranch dressing and endless fries (chips) and chips (crisps). On thanksgiving, I was lucky enough to be invited to an American home and there I had the most delicious meal. However, my plate contained some interesting combinations such as: turkey, mash potato, sweet potato mash with marshmallows on top (yes marshmallows! This was surprisingly yummy) cinnamon rolls, pigs in blankets (mini hot dogs in bread rolls), cheesy grits, risotto and asparagus and finally, the not so unusual, stuffing and cranberry sauce. For dessert I was also treated to pies, something of which I have not had much of in the past, I ate pumpkin pie, apple pie, bourbon and pecan pie and finally peppermint pie; I thoroughly began to understand why American’s enjoy thanksgiving so much!

Personally, I did not understand the benefits of a 21 year old drinking age before I came to America, and being here, I still do not understand the benefits. A lot of the ‘underage’ people I have met really do feel ‘underage’ despite being perhaps 18, 19 or 20 years old. I cannot speak for the majority but I believe what I have witnessed on nights out shows a decreased immaturity in young adults leading to more destructive drunken events…

Surprisingly to me, and I am unsure whether this applies to the majority of America, but in Florida no one smokes tobacco. The University of Florida itself is a tobacco free campus and anyone caught smoking a cigarette will be fined. I am sure this contributes to both the cleanliness of the campus and communal areas such as around the lakes and grassy plazas. This is in stark contrast to what I have experienced at my English University, where the area outside the library is constantly littered with cigarettes. Also, sometimes the most social parts of nights out happen in the smoking areas. No bars or clubs around my campus have dedicated smoking areas and I have seen Americans personally comment towards people smoking, letting them know how disgusting they believe it is.

One thing the Americans do not lack, is enthusiasm and positivity. I know this may be a stereotype, but the general attitudes of the people I meet in classes, in societies and at events is only of this. I know perhaps on Facebook and Instagram, the flow of positive captions and life quotes may get a tad annoying and may only be what one can see on social media, but I do feel as if these people are really embodying this positivity which is very infectious.

To an average English student, the concept of Fraternities and Sororities is a very alien one, apart from what we may have seen in films. Frat and Sorority life play a massive part here on campus, their houses taking up whole streets suitably named Fraternity and Sorority Row. The numerous Frat’s and Sororities range in who they appeal to, they can be Christian, Jewish, Agricultural, Southern, Big or Small and they all have Fall and Spring Rushes where people can pledge to join. One Sorority house I got to know housed 70 girls in basically a mansion on campus, complete with grand piano and TV room. The respective Frat’s and Sororities take part in and hold many events on campus and once you are part of the institution, many contacts across the world are made available to you, being their brother or sister. I think a lot of Greek Life gets stereotyped within films, and although some parts may be true, from what I have seen, these houses provide an extended group to be a part of at University and help you get through college life with people who share the same interests as you. 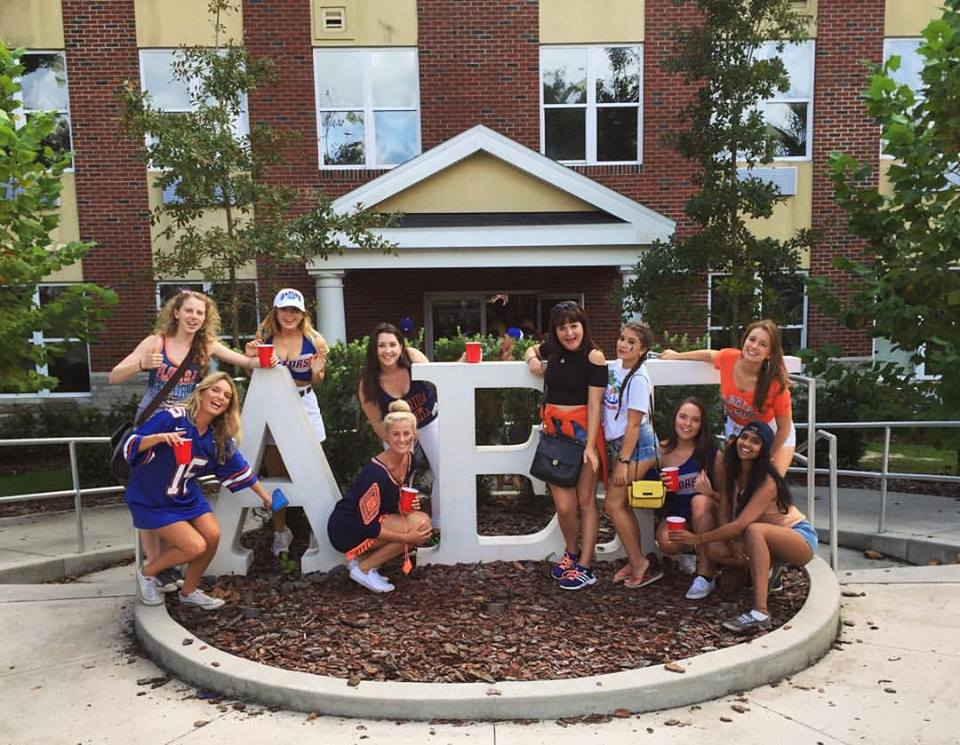 I have learnt a variety of things since being in America but the last subject I am going to mention is how people in Florida cannot seem to grasp accents. Firstly, mostly everyone I start speaking to assumes I am Australian! Secondly, the average British person, upon hearing an American/Spanish/Dutch person in a shop perhaps, would not go up to them and ask where they are from. However, wherever an international seems to go, you are met with a very surprised voice asking where the hell are you from?

Floridays: My Miami adventure so far