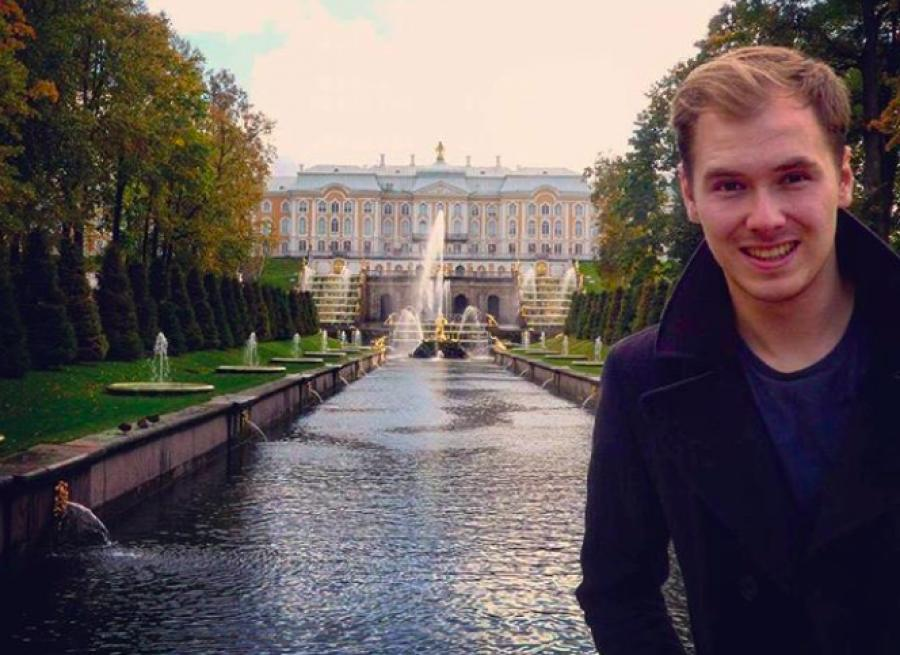 This article was written by Alexander Darby, published on 21st January 2016 and has been read 8612 times.

Alexander Darby is studying German and Russian at Durham University, and is spending his year abroad studying at the Nevsky Institute in Saint Petersburg, and doing a translation internship in Vienna, Austria. Here is his survival guide to Russia! NB: the vodka advice :)

Ol’ Mother Russia is a complete culture shock for the average British traveller. Moving out to St Petersburg for four months, I really had no idea what to expect other than that which I had previously read about the city online which very often tended to focus greatly on the many tourist sites as opposed to living the actual Russian lifestyle. In all honestly as I landed at Petersburg Airport, I had every single thought and fear running through my mind before I had even got off the plane; what if there was a problem with my visa, what if my Russian knowledge was too limited, what if my suitcase was lost by the airline (which ultimately ended up happening). But simply put, there was no going back. I had made my decision to spend the term in Russia and was determined to see it through to the very end. Looking back, it was obvious that my time here was going to be tough, very different to that which I am used to back in the UK but I have no regrets with my decision. Russia has really surprised me, having turned out to be one of the most fascinating and beautiful places which I have ever visited. I have decided to write about a few of the observations and particularities which I noticed about Russia, its people and the general way of life here.

Russian food is definitely something which takes a lot of getting used to. Many of the dishes here seem to date back to the Soviet Era and in general, tend to be very simple. For instance, after four months in Russia, I can safely say that I never want to see a boiled sausage (known as sosiski) EVER again in my whole life. The same goes for pickled food; the Russians, or at least my Russian host babushka, seems to pickle everything and anything, or alternatively just cover everything in dill. From tomatoes to garlic, cucumbers to peppers, I can’t seem to eat anything without having some sort of pickled concoction on my plate. Granted, I’m a huge fan of sauerkraut – the German version of pickled cabbage – however the Russians can’t seem to get enough of the stuff, definitely a pickled overload! Admittedly though, a lot of the Russian food can be really tasty, particularly those of shashlik (below, right), a form of kebab cooked on a long metal skewer and plov (below left) an Uzbek dish of rice with meat and carrots which I honestly can’t get enough of! 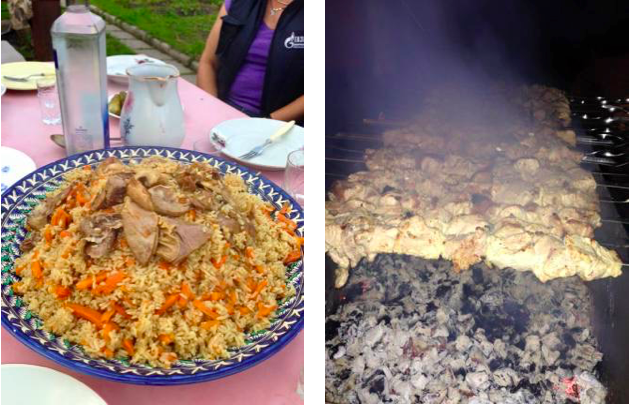 While we’re along the lines of culinary experiences, one thing that you’re guaranteed to find with every meal in Russia is a good ol’ cup of tea. The Russians are mad about it, even more so than the British – so much for stereotypes then! However one thing which goes completely against all my British instincts is drinking tea without milk, yet in Russia this seems to be the only way. As soon as I even contemplate trying to find some milk for my tea, I get scorned by a million Russians for even considering the idea of adding a few drops of milk, even if it does cool it down. Furthermore Russian’s like to serve meat and cheese to be eaten alongside the drink. Now I understand serving biscuits and sweets because at least you can dip the biscuit into the tea itself, but cheese and tea, definitely not my cup of tea!

Now one thing I’ve found here is that a lot Russians are the exact opposite of their hard exterior'd stereotype and are in fact very friendly and helpful people. However one thing that really doesn’t help this stereotype is the fact that Russian’s are loud and love to shout. Now granted, their language is so harsh and shouty that even when they’re saying the nicest, sweetest thing, there’s a high chance that they’re shouting this at you, especially when they’re talking down the phone. “Have you had enough to eat Alex?”, “Have a nice day, Alex!”, whether it’s the fact that they’re trying to get their point across, or they’re simply having a nice conversation with you, the chance is that they’ll be doing this with raised voices so that EVERYONE in the vicinity can hear everything they’re saying. Furthermore, I’ve had a few experiences on the metro where you’ll be sure to hear a ‘bless you’ from at least one Russian if you sneeze in public. You don’t necessarily need to know the particular person, they could be in the same carriage as you, behind you on the escalator or even going in the opposite direction, you’re pretty much guaranteed to be blessed by at least one person.

Another thing to note about Russians is that they are very proud people with extreme loyalty to their country and history. It is not surprising to be asked constantly if you liked a certain place you visited yesterday or if the food you were served for dinner was ‘вкусно?!’ (tasty). They will be expecting full confirmation that you enjoyed it and that may indeed involve confirming more than once just to make sure that you haven’t changed your mind in the past minute since they asked. They are very pleased for foreigners to explore their culture and as with my host babushka, even if I’ve visited everywhere there is to see, I’ve still not seen enough of the city! Despite this constant fight for praise, Russians are very strong people which they really need to be living here, particularly in order to fight the freezing temperatures which come around December time.

6. Acclimatising to the cold

One thing that surprises me however is that fact that a lot of Russians seem to be crazy superhumans, able to withstand such low temperatures, insisting on leaving the house wearing practically nothing. Even in the snow, you see ladies walking around in the thinnest pairs of tights and high heels, whilst the men are walking around in trainers with no socks, something which I personally stopped around mid-October time as my feet could no longer stand the frosty pain and would return home bright red and freezing cold- kudos Russia, well played! 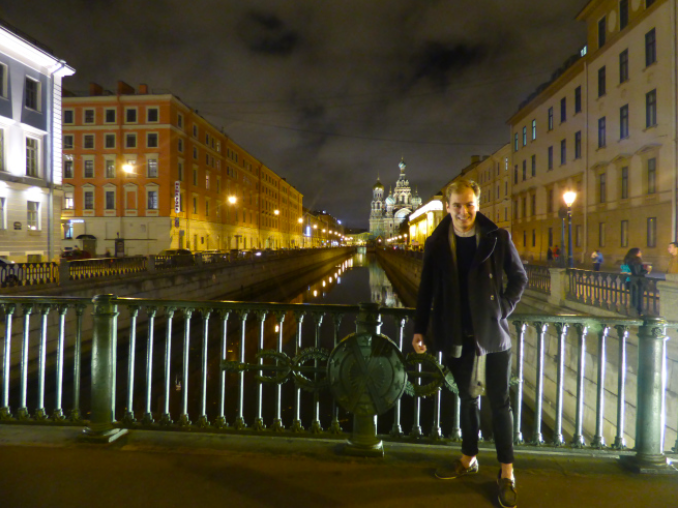 My feet have honestly never been so cold!

In Russia, you can be sure that you’re never far away from many sorts of Putin and Lenin memorabilia. Despite the end of the Soviet Union, Lenin statues are surprising everywhere and walking around Petersburg, you are pretty much guaranteed to be able to spy the great leader in some form or other in many public squares with huge statues dedicated to him. The same can be said for Putin. Despite not having statues of him as that could appear just a little bit ‘soviet-esque’, in every single tourist shop in Petersburg and Moscow you can be sure to find a lot of Putin souvenirs, from Putin Matryoshkas and chocolate bars to t-shirts and mugs featuring the famous topless Putin on a horse photo, or Putin fighting a bear showing the might of Mother Russia. It seems that we tourists simply can’t get enough of him!

One more thing you’re never far from in Russia is some serious full on public displays of affection. Now I’m all for people demonstrating their happiness being with a particular person, but when Russians literally make out anywhere and everywhere, whether that be next to you on the fast-moving metro so they’re almost falling into you or simply on the corner of the busiest streets and parks of the city, it can push the boundary just a little bit. Now the fact is I’m not talking about a peck on the cheek, I’m talking literal full on tongue down each other’s throats which, honestly, can put you off your dinner just a little bit!

There are many observations about Russia but these are just a few which I thought were relatively important to note:

1. Russia really isn’t as scary as people expect it to be.
Before coming over here I got myself worked up by the idea that I would constantly need to be wary of pickpockets and have my passport on me at all times just in case a policeman came up and asked me for it. However, while I’ve been here I’ve had no problem with either so although it's important to take precautions, I’ve discovered you really don’t have to stress about it so much. In general, particularly in the big cities, foreigners really don’t have a problem other than the occasional look for speaking a different language.

2. Russia is cheap.
For the foreigner, the prices here, particularly those of food and travel are extremely cheap and for my first few weeks I was admittedly splashing out, trying as many different things as I could simply because I could afford it. However this does have its downsides and now having got used to the prices, I have found myself becoming a bit of a cheapskate and I’m actually scared of going back to England where I have to pay at least one pound for a bottle of coke, as opposed to the thirty pence it costs here! NIGHTMARE!

3. Stay away from the Russian vodka.
Vodka here is cheap. And strong. I’d like to say that I am quite a heavyweight when it comes to alcohol, yet the Russian vodka is one to be feared and the Russians, in true Russian fashion, love to make sure that you never have an empty class of it so definitely wary on the side of precaution! On a side note, whatever you do, STAY AWAY from any homemade vodka as it is simply lethal and definitely isn’t worth the potential risk!

4. Get stuck in.
Finally, the best advice to follow in order to survive in Russia is simply to prepare yourself for the unexpected as Russians don’t do things by halves! Throw away any pre-conceptions and expectations of how you imagine Russia to be, because they will most likely be proved completely false. Embrace the Russian lifestyle whether that means going naked in a Russian sauna, drinking a shot of Russian vodka (though not too much) in the name of Putin or eating the awful salted cucumbers. As the Russians say ‘это россия детка’ – this is Russia baby! – and although everything might seem strange and weird at first, Russia has so much to discover and enjoy, it’s just one giant adventure of exploration!

For more travel and lifestyle blogs like this, why not pay a visit to theadventuresofagentleman.com!