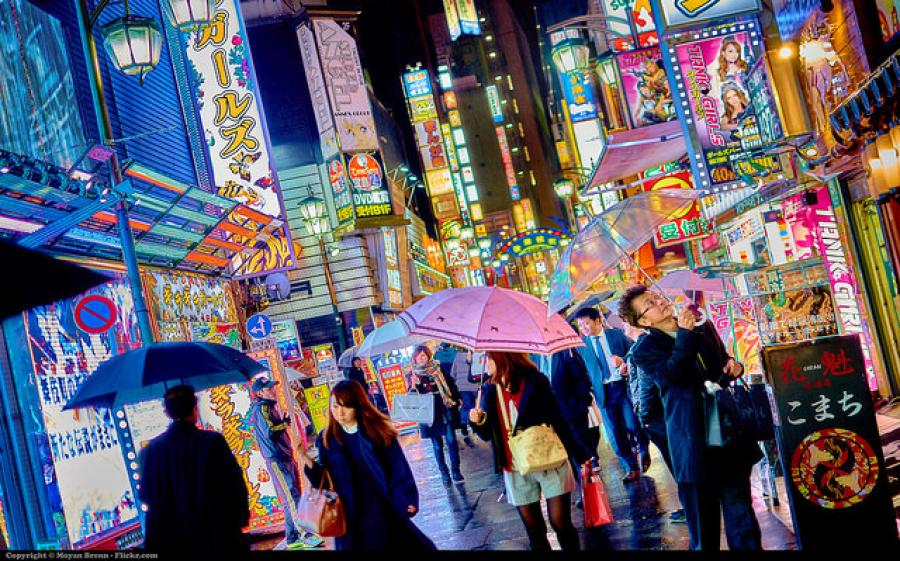 This article was written by Hannah Davenport, published on 18th August 2016 and has been read 6754 times.

Hannah Davenport is 22 years old and studying History at the University of Sussex. She is currently on an exchange year at Waseda University, Tokyo, in Japan, where she does the SILS programme (School of International Liberal Studies) as well as mandatory study of Japanese language.

It was my first time in Japan, my knowledge of the country was very limited and based mainly on Kurasawa and Studio Ghibli movies. Therefore I was susceptible to many of the stereotypes about Japanese culture and society in the West, ones that I am now acutely aware of every time I encounter the ‘token-Japanese’ character in western movies - usually a girl in a school outfit, reading anime and speaking very broken English.

Living in Japan will reveal the truth about the diversity of Japanese society and hopefully break the stereotypical perceptions. Tokyo is not just about ‘kawaii’ culture, salary men and robots - although most people do love anime, there are pretty cool robots and harajuku girls are real and amazing.

1. Speaking the language (or mainly not speaking it)

Anyone coming to study in Japan should be advised to start learning some Japanese before! Even if it is just writing katakana or hiragana (2 of the 3 alphabets used) it will make life slightly easier when you first arrive, or at least a little less overwhelming. Japanese Lesson is a very useful website to start with the basics. 'IMI’ is also a great dictionary phone app to download for free, and here are some others.

But if you don’t manage to learn anything before (like me) then just try to embrace your lack of understanding for the time being, at times it is easy to pretend you are in a real life video-game. And imagine how much worse those high-pitched street advertisements would be if you could understand what they were saying.

Tokyo has a labyrinth of train lines and networks, over-ground and underground taking you far into the metropolitan suburbs; it can be extremely overwhelming, even after months of use.

1. First of all, buy yourself a Suica or PASMO card (like a London Oyster card), which means you won’t have to stress out buying new tickets.

2. Secondly, get yourself a train map from a station ASAP - remember what line/lines your local station is on and keep it in your bag always.

3. Be wary when agreeing to meet people outside a station. Most stations generally have numerous exits - sometimes miles apart. Special caution must be taken at Shinjuku station. Speaking from experience, It is easy to spend hours searching the underground station complex for a lost friend.

4. Remember the last trains city-wide usually leave at around 12am (but sometimes before) so don’t miss it, unless you don’t mind sleeping in a McDonalds until 5am.

3. Finding a place to live and university life

There are a couple of options for living in Tokyo, I chose the cheapest which for me was a shared university dormitory room. In most Japanese universities you will find international student dormitories separated from those for full-time Japanese students (making it all the more difficult to make actual Japanese friends). It also unfortunately does not mean the rules are any less strict.

 Given that almost all Japanese students are 18 when they enter university and the drinking age is 20, combined with Japan's love of bureaucracy and rules, means that dormitory life is very different from the liberal experience I was used to in Britain. These include curfews, although usually only for women - gender equality is still pretty behind in certain dimensions - as well as strict ‘no visitor’ rules and noise warnings, all of which can make you feel frustrated and restricted at first. However the rules vary depending on university and specific accommodation, so look up your choices in detail before.

Other people choose to get their own apartment which gives you more freedom, however again look up the details as some apartments also even have no-visitor rules. Most (affordable) apartments will be basic, muji - style single rooms, with all your necessities an arm's reach away.

Another option for those who already have Japanese language skills is to stay with a host family. This can be a nice way to have a less university-oriented experience and learn the language better, although its a bit more expensive.

Japan is extremely bureaucratic, which you will become aware of moments after getting off the plane and are swept into a long, confusing immigration process including a long, orderly wait in a queue you probably have no idea what for (get used to this, people in Japan love to queue).

Every person requires a residency card which has to be collected at the local ward office, located in Shinjuku for Tokyo residence. Here you also purchase your health insurance which is a requirement for all those staying in Japan, even on a short-term basis. This means students get a 70% reduction on their insurance and medical bills. But be warned, go there early and with a free day as you can expect long waits and, you guessed it, queues.

Try to set up a bank account so you don’t have to search for foreign bank ATM’s - 7eleven and Lawsons in general are the only places for this. Shinsei Bank is probably your best option as it has the least requirements and charges for transferring money from overseas, although it can only be used for ATM withdrawals. Also consider getting a currency card.

5. Spending and getting a job in Tokyo

Tokyo is not the overly expensive city people make it out to be, at least it doesn’t have to be when you're a student. Dinner should usually cost around £5.50 and a tasty lunch bento averaging £3.50, so by London standards it’s not too bad. However there is a big eating-out culture, especially when peoples apartments are too small to host anyone and dormitories are not designed for sociability. Going out can easily rack up when an innocent trip to an izakaya ends up being followed by karaoke, pachinko or bowling and you have missed the train and need entertainment until 5am - or an expensive taxi home. But nights out in Tokyo are worth the price tag and once you become more familiar with the city you can find cheap places for example BYO parties or 1000yen (£6) one hour all you can drink izakayas, so it can be pretty easy to have a good time on a budget!

If you need a job and don’t have great Japanese language skills your best options as a foreigner are teaching or babysitting. Hit up Craigs List and search your options. If your Japanese is good then you have a lot more opportunities and can find a job by looking around and handing out your CV.

Tokyo is a very safe place, people trust each other, it's amazing and most foreigners are not used to this. Don’t abuse it and steal! It is so nice that a city so big can remain so trusting and kind, that the coat you left at 4am in a McDonalds with your wallet in is sitting in the same spot one day later. However obviously humans are humans so still be cautious, but there is little worry about in terms of walking home alone in the early hours or leaving your bag unattended in a cafe to use the toilet.

People are also (usually) extremely friendly and will go out of their way to help you as much as they can, even leaving their work to personally walk you to where you want to go. So don’t be afraid of the language barrier and asking for help.

7. A short guide to some of Tokyo’s neighbourhoods

8. For your foreign-food cravings in Tokyo

To say Tokyo is a convenient city is an understatement. You will find endless konbinis, arcades, giant shopping malls, animal cafes, maid cafes, slot/claw machines, batting ranges, bath houses, restaurants, bars, hairdressers, tiny-animal pet shops, shrines, parks etc almost anywhere you end up. So my main advice would be to just leave your room, take a walk and see where you end up in the big city.