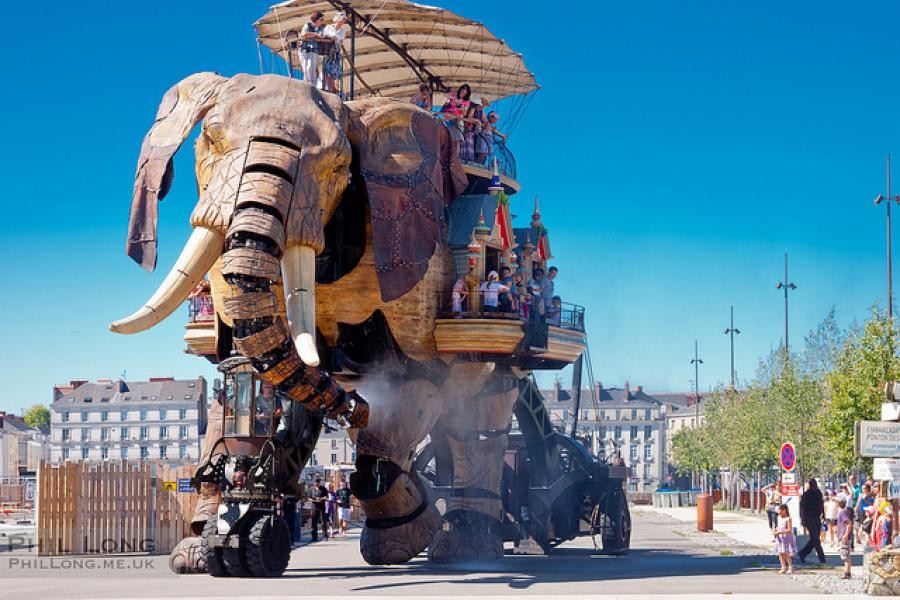 This article was written by Wan Fan, published on 8th April 2014 and has been read 5962 times.

French Mole Diaries Language Assistant Nantes King's College London
Wan Fan studied French at King's College London. He spent his year abroad as a British Council teaching assistant in a secondary school in Nantes and thoroughly recommends the city as an alternative to, the more commonly visited, Paris. Here is his advice about transport, banking, supermarkets, socialising, eating out, shopping and things to do in Nantes.

Although it seems nobody in the UK has heard of Nantes, it is actually France’s fifth largest city. Situated near France’s western coast, it is the capital of the Pays de la Loire region and winner of Time’s most livable city in Europe, and European Capital 2013. The city is close enough to Paris to visit friends or go sightseeing, yet sufficiently removed from the capital so you never get surrounded by tourists or English speakers. In other words? Perfect for your year abroad.

Travelling from the UK

The fastest way to get to Nantes is by air. You can fly direct from London, Liverpool, Southampton or Manchester to Aéroport Nantes Atlantique. During the peak season you can buy cheap tickets with budget airlines but off-peak flights are infrequent (i.e. one flight a week). However, more expensive AirFrance flights are available (almost) daily all year round.

Although it’s long journey, the cheapest way to get to Nantes is by coach. A single ticket from London to Nantes will cost you less than £30. The journey is split into two parts: London to Paris and then Paris to Nantes. The first leg takes seven hours; the second leg nine.

Nantes has an excellent public transport network where affordable trams and buses span across the entire city and its suburbs. One of the first things you will want to do when you arrive in Nantes is pick up a network map. The network is run by TAN and they have an online journey planner that will give you all the information you need for making a journey in and around Nantes.

If you are lucky enough to be in the centre of Nantes proper, everything is in walking distance and much of the central city is pedestrianised. Even if you find yourself in an outer suburb, like me, the trams are very frequent and you can almost always get to Commerce (the centre of the city) in less than three quarters of an hour. But it is always good to go online and check when the last tram leaves. Because if you live in a suburb that’s two hours away by foot, you don’t want to be stuck in Commerce at 3am in the morning with only an expensive taxi to get home.

It is wise to invest in a monthly pass for the tram/bus network. At the moment, Student Finance England will reimburse students part of the cost of a monthly pass.

If you’re going to be in France for a whole year, you’ll soon find that the rail network is your friend. The entire French rail network is managed by the state-owned SNCF. Nantes’ (fairly) close proximity to Paris means you can use the capital as a hub to pretty much anywhere else in France or even Belgium, Switzerland, Germany, Spain or back to the UK. Nantes also has direct rail links to Bordeaux, Rennes and Grenoble.

Fortunately rail tickets are much cheaper than in the UK and they can be purchased online or at rail stations. You should definitely invest in the Carte Jeune 12-28. It’s similar to Britain’s 16-25 Young Person’s Railcard and not only gives you huge discounts on rail travel all year round but allows you to sometimes upgrade to first class for as little as €5. First class entitles you to better seating and a small discount at the train bar. You can now buy the Carte Jeune in the UK before you leave, and remember to carry ID (e.g. a UK Driving License) if you use the Carte Jeune as ticket inspectors—who are ubiquitous on the SNCF network—often ask to verify your identity.

SNCF have recently launched a free loyalty card called Voyageur that allows you to purchase tickets online and dispense of the need for receipts or tickets. At stations and on the train, they just scan your Voyageur card and you’re good to go. The card also allows you to collect points and earn discounts against future tickets.

One of your first priorities on arriving in France should be to open up an account with a French bank as, if you are teaching, your salary can only be deposited into a French account. If you are not teaching, the currency rates are so unfavourable, it seems silly to continue using a British account abroad.

In Nantes you have a large choice of banks including many big names: HSBC France, Société Générale, Crédit Agricole, BNP Paribas and CIC. However, the most prevalent bank in Nantes is the Banque Atlantique Populaire - it is the regional branch of the national co-operative bank, Banque Populaire.

The actual opening of the account is a painless process. You will just need your passport, proof of your French address and if you are teaching, proof that you are an assistant (e.g. your arrêté de nomination).

In the middle range, you’ll find Carrefour, Hyper U/Super U, E.LeClerc, Casino and Géant. And towards the lower end there’s Lidl, Leader Price and Netto.

There are two large cinemas in Nantes: The Gaumont and the Katorza both offer films in version originale (VO), meaning that the films will be in their original language (nearly always English) but with French subtitles.

Strangely, you can get vouchers from IKEA that give you discount prices at the Gaumont cinema. The IKEA is located in northwest Nantes (at the tram stop Tourmaline).

Eating out in Nantes

Nantes has a few Michelin star restaurants but I want to mention four other/cheaper restaurants that you must visit during your stay.

The first is called BPM (Beats Per Minute), near the tram stops Place du Cirque and 50 Otages. BPM is a pizzeria which serves delicious and well-priced food. The lady who runs it is also very supportive of non-French speakers and incredibly nice. Secondly, located in central Nantes, is Les Moules du Bouffay that exclusively serves mussels, and their moules aux frites are excellent. For a very decent price, you get a large bowl of moules and unlimited fries. Its fries alone are good enough to warrant a visit. Thirdly, I should mention that in the centre of Nantes there is a fast-food chain aptly named Quick!. It looks like McDonalds but I have been reliably informed that it is both cheaper and more delicious than its American rival.

Where to begin? Nantes is full of interesting things to do. The city has a great tourist website (in English and in French) that tells you what is happening at any given time. The city is divided into three chunks by the Loire river: Nantes proper and the city centre is north of the river, below the river is the southern section made up of Nantes’ suburbs (Rezé, St. Sébastien, Vertou and Bourguenais) and then in between is a big island (Île de Nantes).

The island is undergoing massive regeneration and it is where all the trendy events take place. Because of this regeneration there is an eclectic mix of old and modern architecture. Incidentally the court of Nantes is based on the island and is worth a visit because of its design.

Although you should visit the tourism website for suggestions, something that I cannot resist mentioning is the Tour de Bretagne, located in central Nantes (near tram stations Commerce or Bretagne), which you can go up to look out on to a view of the whole of Nantes. It’s free and a must-visit, especially around sunset.

And one other thing...

It rains a lot in the west of France and so you should carry an umbrella with you everywhere. While Nantes is great for many different reasons, it is constantly wet - really.