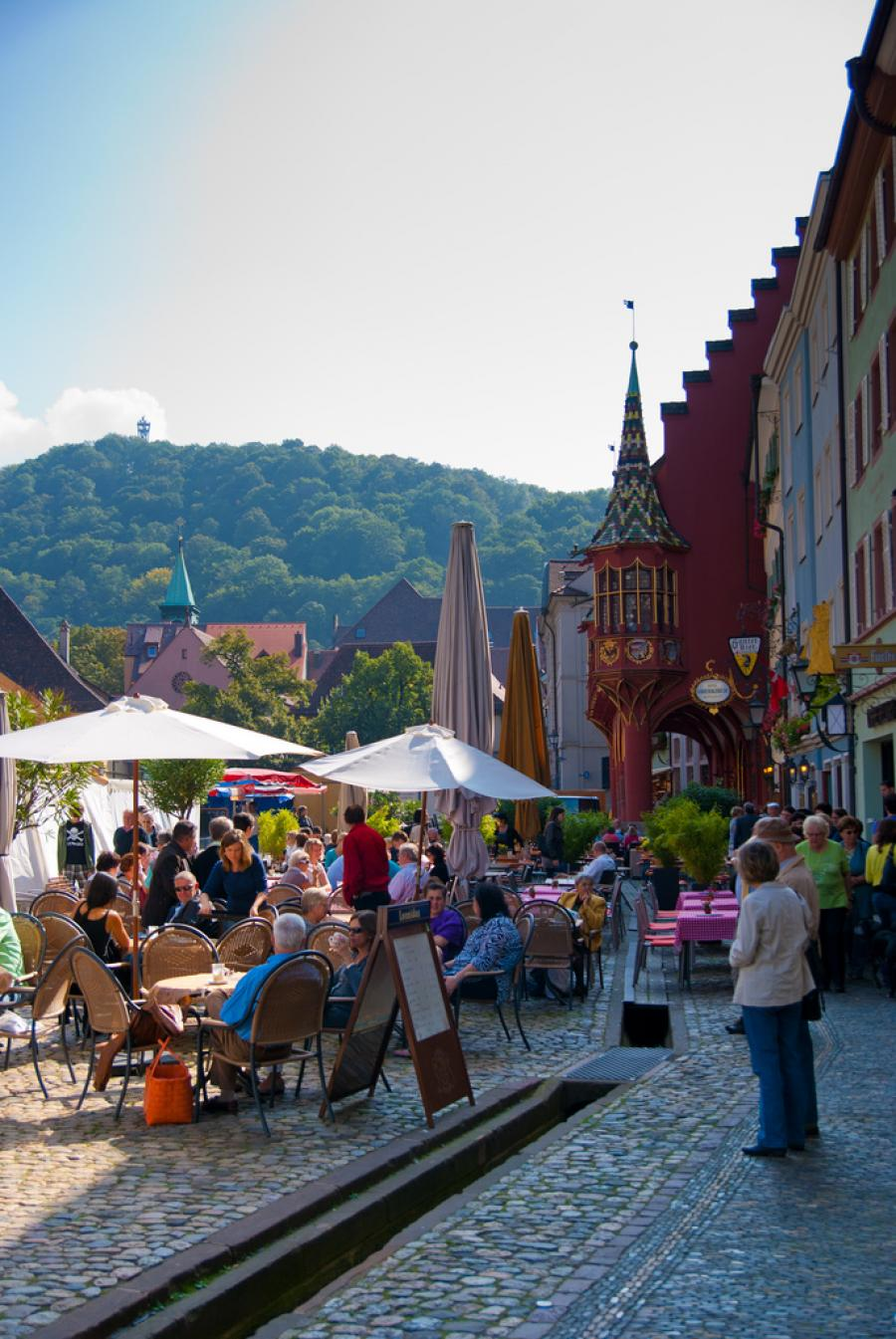 This article was written by Holly Simmonds, published on 7th April 2014 and has been read 5465 times.

Study Abroad Mole Diaries Manchester Uni Freiburg Erasmus+
Holly is a Manchester University student spending her year abroad in Freiburg, in Baden-Württemberg, Germany. Here is her insider guide to the town: her first impressions, banking, accommodation, enrolment at the university, the best places to eat, getting around town, her top ten things to do in Freiburg, and the benefits of small town life as a year abroader in Germany...

Living abroad last year was without a doubt the best year of my life so far. As a fourth year student my enthusiasm for university this year is wavering slightly, however my adventure-fuelled year in Germany has made my degree completely worthwhile. I spent 10 months last year living and studying in Freiburg im Breisgau, which is southwest Germany and is in touching distance of the Swiss and French borders.

Historically Freiburg is an old university town on the edge of the Black Forest in the Baden-Wuettemberg Bundesland; the location of the city really does add to your year abroad experience. With its traditional German buildings and it’s culturally diverse attractions, I couldn’t have asked for a better place to be allocated. Initially I felt apprehensive about living in the south; firstly I knew the dialect would be strangely foreign to me and secondly I had always dreamed of living in a big city like Berlin or Hamburg. However after a few painful (and failed) Skype job interviews I was assigned to study at Freiburg’s prestigious Albert-Ludwigs Universität. Freiburg is as far from the lure of the big city as it gets; it is a traditional Disneyesque quaint city but is very cute and bustling all year round.

The unfamiliarity of stepping off a bus into a random German town is something I will never forget. I knew no one, knew little German and didn’t even know where I was living. Luckily I had written down the address for my Halls of Residence and just held the piece of paper up to the taxi driver and said ‘hier, bitte’. I think that whether you have high or low expectations for your year abroad, nothing really prepares you for that ‘period of settling in’. It was tough, however our determination and sheer stubbornness to admit defeat forces us to reach that light at the end of the tunnel. As a slightly shy person I really had to go out of my comfort zone to integrate myself and make a life out there in Freiburg, but happily I made many German friends, as well as American and copious amounts of other Europeans - some of whom I now see as life long friends.

Once I had settled in and found a good group I could now call my Erasmus family, it was time to get down to the serious business of visas, bank accounts, residency and university enrolment. The Erasmus team in Freiburg will offer an introduction tour where you can sort all these things out in one day, DO NOT MISS IT! It is very helpful and a great way to meet people and make connections (and find out where the Erasmus parties will be!)

Firstly, I set up an account with Deutsche Bank however many of my other friends across Germany were with Sparkasse and it proved to be more efficient. Plus I noticed that when travelling around other parts of Germany and Europe there were Sparkasse banks everywhere with free withdrawals.

My second piece of advice would be to sort your accommodation out before you move to Freiburg. I had one friend who spent the first 2 weeks living in a 12-bed hostel whilst searching for somewhere to live. Rooms are sparse and rent is high in Freiburg so let the university help you. I lived in the Stühlinger Studentenwohnheim with 4 other German girls. My accommodation was clean, modern and in a fantastic location to the city centre, however I wouldn’t advise staying here as most of these students are post grads or ones who have been living there for the duration of their studies, thus it is fairly uneventful. It appeared that all of my friends were living in the Stusie blocks at Seepark. This is where you want to be, not only for the best socials but also for the great summer atmosphere.

Enrolment at the university

Then finally make sure you do not miss the deadline for enrolment onto courses at the university. All Erasmus courses fill up quickly and after that it proved extremely hard to find enough manageable courses to boost up your number of credits.

Without a doubt invest straight away in a RVF Semester ticket. This will ensure easy and free travel on all forms of public transport, particularly the Straßenbahn, throughout the City of Freiburg, the Breisgau-Upper Black Forest district and the district of Emmendingen. It costs only €89 per semester and can be bought at any of the main train stations in the city. I assure you, you will use this pass everyday, whether that is to class, out in the evenings or on weekend day trips into the country.

You will never be bored in Freiburg and if you are then you’re not going to the right places! Both the winter and summer months have so much to offer. Here are 10 of my most rated things to do whilst living in Freiburg (not in any particular order):

1. Skiing on the Feldberg.

This mountain is the highest peak of the Black Forest and apart from having breathtakingly beautiful views; Feldberg is home to a small but brilliant ski resort. One of my highlights from last year is the few times I visited the Feldberg Mountain. I am not an experienced skier but that didn’t matter. We ended the day with Kartoffelsuppe and fresh Brötchen overlooking the French Alps in the distance.

2. Drinking a cold Ganter beer in Augustinerplatz in the summer.

All the students of Freiburg gather in this sloped square in the centre of town. The atmosphere is great and everyone is in good spirits, be sure to watch out for the Biermann on his bicycle.

3. The Strandbad and the river in Littenweiler.

You need good weather for both of these; we were very lucky as the sun shone for us from April onwards so this was our popular haunt for swimming and topping up the tan.

4. Use your semester ticket and take a trip to Titisee.

Surrounded by the Schwarzwald, the views across the lake are stunning. Plus if you’re feeling adventurous get yourself on a pedalo to explore the whole lake.

Climb Freiburg’s Schlossberg for panoramic views across the city, then reward yourself with a beer from the Biergarten.

Freiburg is known as a student hotspot and it certainly lived up to this reputation. For such a small city there really is something for everyone when it comes to the nightlife; Kagan, Waldsee, Stusiebar, Tacheles, Schneerot, Feierling and Mudom Bar to name just a few.

7. Of course the Christmas markets are another must.

If only to taste the Marzipan, Stollen and a glass of Glühwein. These will go on from the end of November onwards.

8. Visit the weekend markets around the Münster.

The fruit n’ veg there is simply Lecker!

Germany is well known for it’s celebrations and festivities, so get involved; especially with Oktoberfest, Frühlingsfest and Karnival. These are great opportunities to immerse yourself fully into the German culture and befriend the natives.

When the weathers good enough have a BBQ around Seepark, this is another place where the students of Freiburg gather till the early hours of the morning.

In general I’m not a huge fan of German food, as I’m a vegetarian the traditional dinner of carbs and meat didn’t initially appeal to me… however naturally I fell off the Wagen and gave in to the Bratwurst! Trying Sauerkraut, Spätzle, Knödel, Maultaschen, Currywurst, Weißwürste, Kartoffelpuffer and Pfannkuchen are all musts!! You will find traditional German meals at places like Tacheles and Kartoffelhaus in town.

However, for more international food some particularly good restaurants I recommend are Brennessel on Eschholzstraße for €1.80 Spaghetti bolognaise, Aspekt café outside the university, icecream at Stadttheater tram stop and the Münsterplatz for the best Bratwurst in town.

Additionally, if you’re looking for Italian food, Bella Italia in the centre is delicious or for a simple kebab try Uni-Kebab. Lastly, as you probably already know, throughout Germany there are large Turkish communities and you will find decent authentic Turkish food throughout Freiburg also; I strongly suggest a visit to Divan at Stadttheater as the food there is incredible and affordable.

To sum it up

One of the best things about going to a smaller city on your year abroad is that fewer people will speak English which will not only help you improve your language but force you to integrate yourself into the new culture. I spoke German every day, whether it was just at Edeka (your local Supermarkt) or in university, there is much opportunity for you to improve. I will note however, that your social group tends to be with other Europeans so naturally everyone will switch to their strongest common language of English. If this is also the case for you don’t worry as it makes your time there more fun and gives you a chance to really make friends on a more personal level (just make sure you find other ways to practice your German). I found myself a part-time English teaching assistant job at a local afterschool house out in the country, this helped my German as much as it did their English as the children were very new to the English language and spoke mainly German back to me.

Originally I had planned to only stay there for one semester but I really wasn’t ready to leave so I extended my contract with the university to a full year. When it was finally time to leave in July I reluctantly boarded the plane back to England, which now felt as foreign to me as Freiburg had at the beginning of my year abroad. I have already booked my flight back in June and plan to live in Berlin in the near future.