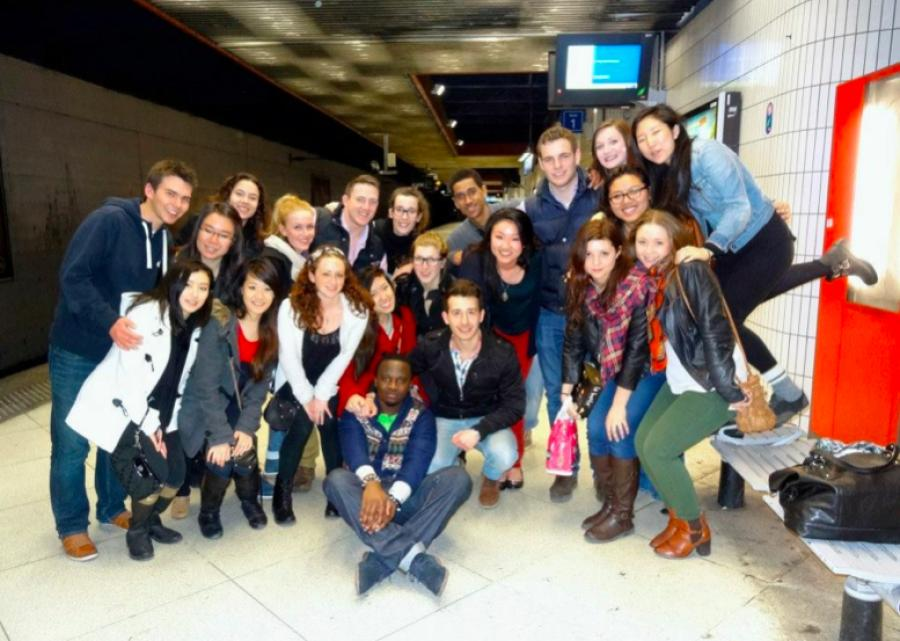 This article was written by Sophie Myers, published on 8th April 2014 and has been read 7123 times.

Paris Mole Diaries Sheffield Hallam Uni Cergy Erasmus+
Sophie is studying International Business with French at Sheffield Hallam University. She has spent one semester at ESSEC business school in Cergy, just outside Paris and now she's interning for Alcatel-Lucent in Paris for a year. Here is her advice about living and studying in Cergy - where to live and go out, and some wonderful words of wisdom...

First things first, you’re probably wondering where the hell Cergy is. This was first on my list of questions as I was preparing to up and move there just over a year ago. Cergy is situated in the northwest suburbs of Paris, about 30 miles from the city centre (or so Wikipedia informs me), and is a not so pleasant 45 minute train ride from Paris on the RER A. If you are moving to Cergy, the RER A will become your friend, admittedly not your best friend, but it’s your only link with Paris (where you’ll pretend you live) so you kind of learn to love it.

Cergy is home to the ESSEC business school’s main campus, where I spent a semester studying last year. ESSEC is one of France’s top business schools, and rightly so, with the CEOs of Coca-Cola Europe, KPMG France and Adidas France gracing it’s alumni. Although you don’t get the ‘3 hours of uni a week, spend the majority of your time tanning on the beach’ ERASMUS experience that your friends studying in Spain are getting, you get an equally amazing experience.

Classes are taught in both French and English across a range of business related topics. The lecturers are usually (ex) businessmen/women who have a real life insight into the subject they teach. Despite being a great learning environment, it can be tough going if you’re used to turning up to lectures whenever you want. You’ll find it’s more like sixth form/college where they keep strict attendance and if you miss more than 3 classes you’ll find yourself in the Principal’s office so to speak. You CAN get through this, with the help of coffee. At first it will seem weird how much coffee the French drink, and then by your third week you’ll wonder how you ever functioned without it.

Accommodation is relatively easy to come across in Cergy, with ESSEC having 4 student residences. My recommendations would be to stay in either Du Port or Cergy Le Haut.

Du Port
This is the nicest of the student halls on offer, and just a 10 minute walk from the school. However, luxury comes at a price, with du port also being the most expensive. Admittedly, I did not live here, but often wished I did. We did however; hold most of our student parties here thanks to the relaxed security and large common rooms.

Cergy Le Haut
My halls of residence…Cergy Le Haut isn’t famously cheap, nor can it be considered luxury accommodation, finding its place comfortably in the middle of the two.

Host Families
If you’re not studying at ESSEC but still find yourself in Cergy, host families are a great way to witness French culture first hand, and improve your language skills simultaneously. There were a few people who did this while I was there and the number 1 benefit is having all of your meals prepared for you. The down side is you can’t exactly roll in at 3am and make yourself some drunk pasta, trying not to wake up their children, so if you’re interested in staying with a host family, you definitely need to weigh up the pros and cons.

If, like me, you’re one of those people who hates the pre-night out bickering over which club to go to, Cergy is the place for you. It isn’t exactly what I would call a social metropolis, so places to go out are few and far between. There are a few bars, including O’Sullivans. This chain of Irish bars can be found throughout Paris, and we had one of our very own in Cergy. Think traditional Irish bar, Guinness and whiskey on tap with a great atmosphere. There is only 1 club I can recall in Cergy itself called ‘City Rock’, not a bad vibe, but I would advise avoiding the place like the plague on a Wednesday night, as this is ‘stripper’ night, and the locals tend to assume that this applies to all females.

By far the best night out you will have in Cergy is at Foy’s, the classroom turned student bar inside the business school. Foy’s is open all day every day, so you can even pop in for a pint between classes if you’re having a bad day.

In terms of expense, Cergy replicates Paris prices without the stunning views that come with them, so Foy’s is a welcome source of cheap beer and good times. At 2 Euros a pint, I challenge you to find a cheaper beer in the surrounding Paris suburbs.

The student clubs at ESSEC often host their own parties, either inside the school itself or at a nearby location. Tickets are usually 10 Euro and there is an open bar (lethal). Shuttle buses are provided to and from the venue so you don’t have to worry about taking the dodgy night bus home.

Not for the faint hearted, the final option for a night out is to venture into the unknown that is Paris. Bear in mind that you have to set off into the city at about 10pm (take train beers), and you won’t be able to return until the first RER the following morning. We often braved the journey into Paris of a Saturday night, as you emerge from a club at 6am you can watch the sunrise over the Arc de Triomphe on the Champs-Elysees while you carry your shoes and drunkenly ramble about how classy you feel, versus how trashy you look.

If you’re looking for somewhere to relax at the weekends, or just a nice restaurant to save you from your 12th meal of pasta in a row, then head down to Cergy port. In the summer it’s a great place to sit down and have a picnic overlooking the port. I recommend the restaurant on the water’s edge, Les Relais d’Alsace. Firstly, a seafood restaurant, secondly an amazing view. You can’t go wrong with that combination.

Against the advice of my teachers, being a Liverpool girl my 4 suitcases moving to France were crammed with my best dresses, stiletto heels and enough fake tan to leave me smelling like a digestive for the foreseeable future. Learn from my mistakes girls, the French do not, I repeat DO NOT dress for a night out like we do in England. A simple t-shirt and pair of jeans will suffice in even some of the nicest bars in the French capital.

Don’t take the night bus from Paris to Cergy. Please. One fateful night my friend and I found ourselves on the Noctilien from Saint Lazare back to Cergy. Not only did the journey take over 2 hours, but there was a lovely gentleman at the back of the bus covered in a number of his own bodily fluids for the majority of it, and the smell was horrific. There were a few others who had equally scarring experiences with the Noctilien and I would fully recommend waiting in the city until the first RER.

Save money, preferably before you go. I was very unrealistic with regards to my expectations of the amount of money I was going to spend. Paris is EXPENSIVE, there’s no way around it.

Apply for CAF as soon as you get there. If you’re embarking on your Erasmus to France I’m sure you’ve already heard of CAF, if not, it’s basically free money from the French government towards your accommodation costs. The application process, however, is a royal pain. Make sure you have a translation of your birth certificate and don’t expect the money any time soon. It is only once your Erasmus is fading to a distant memory, that you will find your account has been credited with the long overdue CAF money.

Get a Navigo Pass, the French equivalent of an Oyster card. Ain’t nobody got time to be buying a ticket every morning, basically sleep walking on the way to class. These passes also allow you to travel freely into and around Paris during the weekends, which is great for when you want to explore.

Being in the EU is great (did you get that David Cameron). If you’re between the ages 18-24 and from an EU country you can get into all the major museums/art galleries/tourist attractions for free, or at least at a discounted price. When you see the queues snaking round the Louvre pyramids, sneak yourself to the front, show your ID and next stop is the Mona Lisa.

HAVE FUN! You only get to do Erasmus once, so make the most of it!