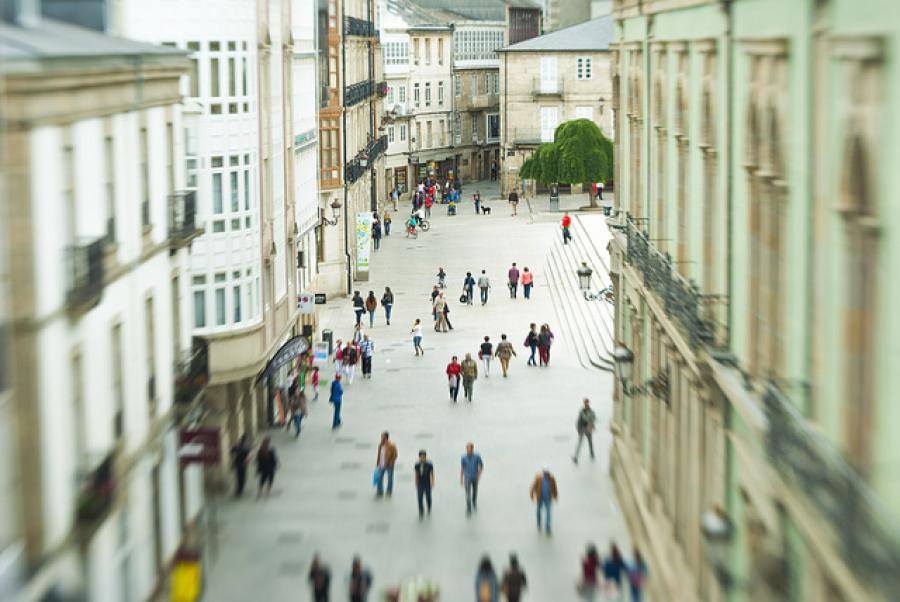 This article was written by Becky Wyde from Durham University, published on 24th April 2014 and has been read 3913 times.

Spanish Mole Diaries Durham Uni Galicia Lugo
Becky is studying French, Spanish and Catalan at Durham University. She has just spent a semester in Tours, France, and is now studying in Lugo, Spain. Check out her blog for her latest update, and here is her insider guide to life in Lugo: a northwestern city in the autonomous community of Galicia, surrounded by completely intact Roman walls, and filled with chocolate and churros!

When I first found out I would be spending the second part of my year abroad in Lugo, a tiny town in the middle of Galicia, terrified was an understatement. The only city in Europe to still have its complete Roman wall and the ‘other’ campus of the University of Santiago de Compostela, there are only about 4000 students here compared to the 27000 studying in Santiago. But honestly, despite all my fears, I’m having a brilliant time here. Yes, it is tiny. Yes, this can get claustrophobic. However, this has forced me out of the town and into exploring the rest of Spain.

Here’s my failsafe guide for anyone going to Lugo. Although it’s often second choice for British Erasmus students, my 3 months here have definitely been the highlight of my year abroad so far and I’d recommend it to anyone.

Contrary to popular (my) belief, Lugo actually isn’t in the middle of nowhere. You can easily fly from either Gatwick or Stansted to Santiago Lavacolla airport, and Lugo is a simple 2 hour bus journey direct from there. Just make sure you check the timetables beforehand- although buses are regular, they change from day to day. Also, please don’t judge the whole of Lugo on how horrible the bus station is. All bus stations tend to be the most godforsaken place in any town, and Lugo is no exception.

The city and finding a place to live

I’ll be brutally honest and say that apart from the walled centre, Lugo is not a particularly beautiful place to live. With what seems like hundreds of identical apartment blocks, graffiti EVERYWHERE and the sterile university building, it can get fairly depressing. However there is some truly stunning countryside in and around the city, which can give you a break. The river Miño in particular is gorgeous. As for accommodation, there are LOTS of houses in Lugo so don’t worry about not finding anywhere. Easypiso and segundamano both helped me quite a lot during the holidays but if you’re worried about being conned over the internet it’s best to come and stay in a hostel and then look around. If you’re desperate to live with Spanish people the best place to look is probably in the University buildings, where there are lots of advertisements and phone numbers. I’m living with Mexican students, though, which I honestly think was the best decision I made this year. We’re in the same situation but also speaking Spanish all the time! It’s also very, very cheap so don’t worry about anything on that score. Unless your room is particularly big, you won’t be paying more than around €170-200 for a room with everything included - I’m paying €132 for a fairly average interior room.

As I’ve said, the university is very, very small, and everyone knows everyone. This means you get to know people in your classes a lot better though, and the teachers also know who you are. Most of them are really friendly and welcoming to international students, which makes a lot of difference. Unfortunately this also means you have to do a lot more work than is traditional on Erasmus, as there’s no way they’ll forget who you are.

One thing you will not have to worry about when you get to Lugo is your language not improving. Pretty much no one speaks English here, and even more refreshing, doesn’t really mind about learning it. Compared to my experiences in France, where the only reason people would talk to me is to ask to practice English, this was a lovely change. You’ll probably be a novelty here: we got our picture taken for the local paper simply for being foreign, and the same man who took our picture wants to organise us a goodbye party when we leave. Galicians are in general friendly, not overly so, but very patient. I don’t feel pressured or really embarrassed if I accidentally mix up tenses or whatever. The accent is also lovely and easy to understand, with a sort of melodious tinge. Gallego also has not been a problem at all. Older people speak it, but younger people communicate mainly in Spanish, and they’ll speak it with you especially if they know you’re foreign. If you’re unlucky some of your lectures may be in Galician, but even so it is possible to guess most of what’s going on.

Before I came, someone told me that I’d have to make an effort to go out here, but to be honest I’ve found the opposite to be true. The Erasmus and international scene here is tiny, but very tight knit and it’s been much easier to make friends that I know I’ll keep for a long time - this also means there’s always something going on, and people to go out with. Lugo is also popular with Latin American students, which again just gives you that extra bit of comfort that you’re socialising with native speakers and learning the slang you just don’t learn in university. The bar and tapas scene is fairly big here, and if you can be bothered to drag yourself out at 3am, the clubs by the cathedral are decent if you don’t mind hearing the same songs over and over. La Roma, Onda Media and Ego are personal favourites in my friendship group, as if you’re very lucky, the bar staff at La Roma will give you free shots.

The fact is that Lugo can get claustrophobic- it is brilliant but just so tiny. This turned out to be for the best, as it forced me to get out of my bubble and explore. If you want a lovely, tranquil city, Santiago is the place for you. Dominated by the Cathedral and the Camino, the pilgrimage, it’s cheap and simply beautiful. If you want a bigger city with a beach, Vigo and A Coruña are better options. It’s also fairly easy to hop over the border to Portugal, especially since Galician is basically Portuguese anyway. Porto is about 3 or 4 hours away from Lugo, and definitely worth a visit, if only for the fantastic food. Lugo is really well connected by bus, and for close journeys it’s the cheapest way. For exploring further afield, BlaBlaCar or even flying are perhaps more practical, with Ryanair offering inexpensive domestic flights from Santiago airport.

I had to give this one a mention, as the food here is just amazing. Pulpo (octopus) is an absolute must-try, as well as merluza a la casuela (hake). For non-seafood lovers, churrasco is also an essential- think spare ribs in a creamy garlic and herb dip. One of my favourite things about Lugo in general is the tapas culture- buy a drink and they bring you a free plate of whatever’s on offer. The portions aren’t stingy, either. I have to mention our favourite bar, Fonte do Rei 2 on Avenida de Madrid. With the best tapas and the friendliest staff, it’s one of my favourite places in the whole of Lugo. One more place worth a mention is Los Soportales in the Praza Maior, whose chocolate and churros are one of the main reasons I don’t want to leave Spain.

Galicia is an amazing region which people often overlook because it’s not considered typically ‘Spanish’, and this is true. It isn’t really at all what you would expect, but this has added an extra dimension to my year abroad. And if you do get Lugo even it isn’t your first choice, try not to panic. It’s not Barcelona, but after 3 months it already feels like home.