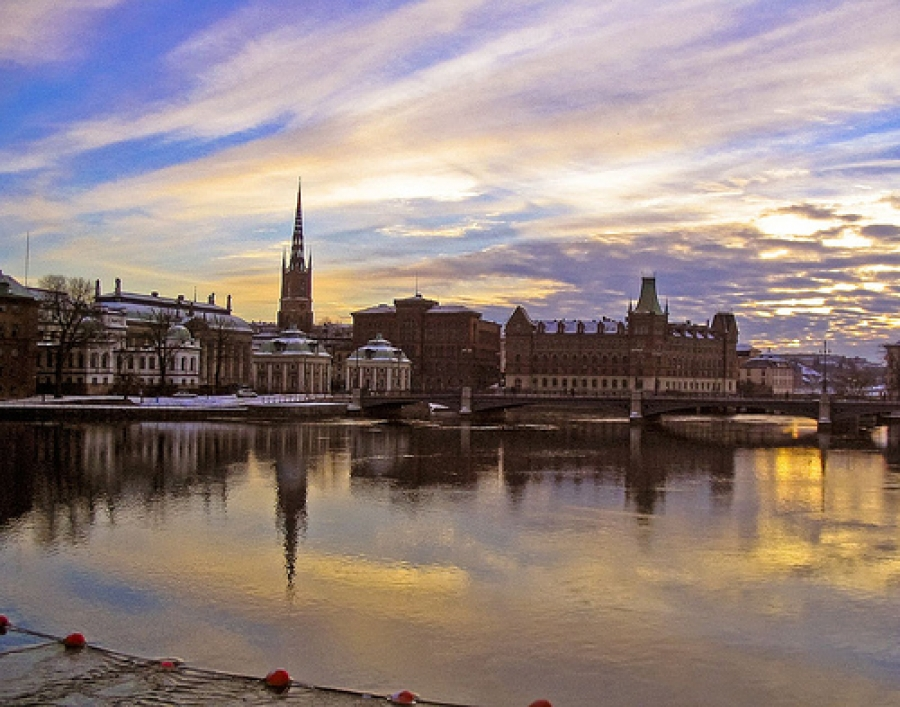 This article was written by Amanda Svensson Folk, published on 17th August 2010 and has been read 4090 times.

Sweden Scandinavia Stockholm
The Trendsetting CityStockholm is sometimes referred to as the Venice of the North. It's easy to see why; gorgeous terracotta houses, canals and classic architecture are centrepiece to the Swedish capital's banquet. Built on islands connected by a series of bridges, Stockholm lies directly on the divide between the Lake Mälaren and the beginning of the Baltic Sea, with locks and canals allowing boat traffic to pass from one water to the other. It's seen by many as the most beautiful Scandinavian city, and others still as one of the greatest cities in the world. Blending modern architecture with characterful old buildings, and with a young population attracting fun nights out, decent shopping and seriously tasty dishes, Stockholm’s a great place to be!
Why should you choose Stockholm for your year abroad?
Each part of the city, each island, comes with its own very distinct vibe. Södermalm for example, once the place where the poor working class lived, is today seen as the artsy, trendy and slightly bohemian area, with an abundance of art galleries, vintage shops and bars to go with it. If vintage is your thing. Stockholm sure will tick the right boxes – afterall, London's Beyond Retro warehouse is in actual fact Stockholm born and bred. And that's just the start of it - you can get some seriously cool and fashionably passé clothes and memorabilia here. The contemporary art scene is thriving, and, with art house Scandinavian cinema coming more to light, you'll be sure to make the most of Swedish culture, in or outside of clubs, galleries and shops. This is where you'll  find places like Herman's, a vegetarian/vegan café and restaurant, with a buffet that leaves even the most dedicated carnivore little more to want for. SoFo, another district in Stockholm (not too dissimilar to the Meatpacking district in New York) is one of the city's most buzzing areas, with small bars, trendy shops and the oasis Nytorget. For warm summer nights there is the beer garden Mosebacke, providing sweeping views of the city and an almost worrying closeness to the many hot air-balloons that take off just before sunset.

The city is home to the world's first National City Park, stretching over the three royal parks of Djurgården, Haga and Ulriksdal. The Island of Djurgården is also home to the world's oldest outdoor museum and zoo, Skansen, and the world's only preserved 17th century ship, Vasa. It was found on the bottom of the Stockholm inlet and rescued in the 1960s, 333 years after sinking during its maiden voyage. This unique piece of history is now on display in the Vasa Museum, one of the most popular of Stockholm's over 70 museums. Quite impressive, to say the least, whilst also giving you a real snapshot of what life used to be like here.

You could be forgiven, as a first-time Stockholm-er, to think the city was just cool shops, trendy cafés and a romantic stroll (or swim) across the narrow side-streets and canals. Not so. And it's not just ships and Viking souvenirs, either. Slightly off the beaten track is Långholmen, a smaller island separated from Södermalm by a canal. This was once a prison island, but the last inmate was released in the 1970s and the former crown prison is today a hotel, youth hostel and conference centre. This is also where you find one of Stockholm’s many mid-city beaches, very popular with the locals.

But you can't properly have seen all Stockholm has to offer unless you have walked through the narrow alleyways of colourful Gamla Stan, the Old Town. This medieval part of the city is one of the best-preserved in Europe, much thanks to Sweden non-belligerent past, notably in WWII. In summer, it's a heaving tourist spot, but as the low-season comes in, it quietens down, only to pick up the pace a little again, during the traditional Christmas market. This is where the city was founded in 1252, and where you find the Royal Palace, one of Europe’s largest palaces, with over 600 rooms.

A must for those wanting more exclusive shopping and nightlife is a visit to the up-market neighbourhood of Östermalm and the party central area of Stureplan. This is where you'll find the likes of Louis Vuitton, Gucci and the Swedish equivalent to Harrods. Hustling and bustling Stureplan entertains the young and beautiful in clubs such as Laroy, Sturecompagniet and Spy Bar. If there was ever a place to confirm the stereotype of beautiful, tall, blonde Swedes this is it! Claudia Schiffer eat your hear out, and all that jazz. Östermalm also sport some impressive architecture; most of the grand buildings date from the late 1800s and are still exclusive residential houses.

You should plan at least a day trip, by steamboat, along the lake Mälaren; just an hour away lies the Drottningholm Palace, official residency of the Royal Family. The palace was built in the late 17th century, inspired by Versailles and the Chinese Pavilion – resembling a somewhat idyllic and fairytale pink summer castle, both the residence and the vast palace parklands surrounding it make it one of Stockholm’s three UNESCO World Heritage Sites.

Taking a boat the other way, into the Baltic Sea, will get you to the Archipelago. Made up of over 30,000 islands, islets and skerries, this is an extremely popular holiday destination for Stockholmers and tourists alike. Many keep a summerhouse here, and the larger islands all have hostels for those wanting to do a bit of island hopping.

Stockholm is a city of water and greenery, of grand and colourful architecture and a mix of the cosmopolitan big city, with a picturesque village-feel thrown in. From the few snowy hours of daylight in mid-winter to the semi-dusk of late summer nights, Stockholm can offer culture, entertainment and seasonal attractions of the highest international standard. It's impossible to come here and not fall in love with the city, the culture, the nature or even just the cool factor – both temporal and cultural. An absolute must for any city-lover!

Living with the Locals: Copenhagen