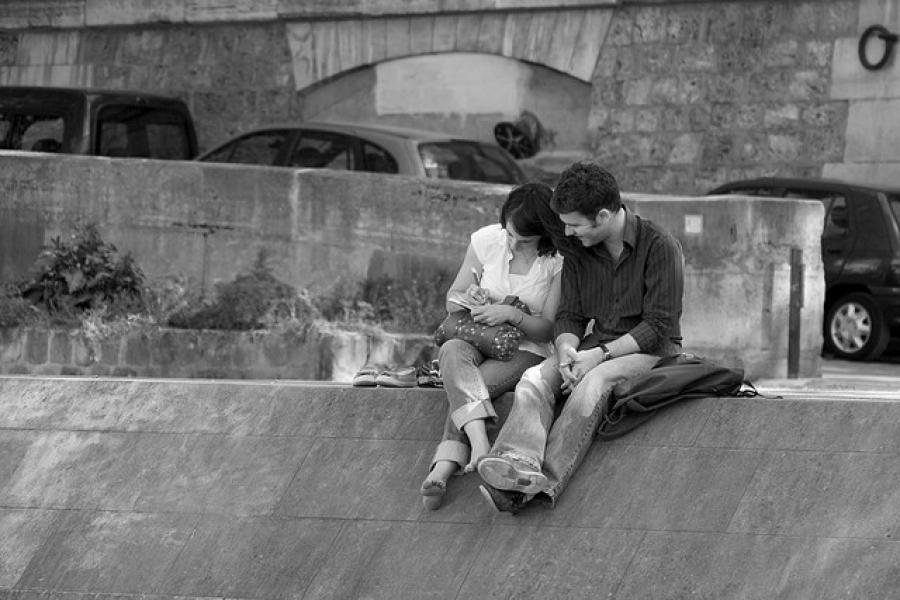 Paris in Love by María Abad

This article was written by Katie Gibson, published on 4th June 2012 and has been read 18448 times.

Leaving behind friends and family is one of the hardest parts of going on a year abroad, especially if that means saying goodbye to your boyfriend or girlfriend. When you’re in a relationship, the prospect of one of you taking a year abroad can lead to a difficult question. Will your relationship survive a year apart? It may not be the obvious option, but going abroad as a couple could be the solution. My boyfriend and I have spent the past nine months living in France together. Here’s how we did it and what we wish we’d known beforehand!

1. Before your year abroad

Setting up an Erasmus Exchange
When my boyfriend first suggested that he accompany me on my year abroad, I had my doubts. As I study French, my year abroad was almost organised for me. All I had to do was pick which university I wanted to go to, send a couple of CVs to prospective employers for my internship, and find somewhere to live. My boyfriend, on the other hand, studies physics, and a year abroad wasn’t even something that anyone else on his course was considering, let alone an organised part of his course.

But with a little persuasion and research, I had to admit that the idea was tempting, and might just be possible. A conversation with his university’s year abroad department revealed that, thanks to the Erasmus scheme, it was possible for him to study abroad, but since his department didn’t have any established links with universities in France, it was up to him to find a university and convince them to accept him as part of Erasmus. But the formal aspect of the year abroad isn’t the only thing you need to think about before taking the plunge...

Deciding if it’s the right move for your relationship
If you don’t want to spend the year apart, the answer might seem to be an obvious yes. But it is a big commitment and you definitely don’t want your year abroad to be marred by arguments or even a break up, so you both need to be as sure as possible that it’s what you want and that your relationship is strong enough to survive the challenges along the way.

When my boyfriend first suggested we go abroad together, I was still afraid to write his birthday in my diary just in case we broke up before then. So the prospect of committing to a year spent together in a foreign country was scary to say the least. And yet as the year abroad approached, I realised that the year abroad could be that much more fun if I had someone to share it with.

Choosing where to go
Organising any year abroad can be a difficult and time consuming process, so trying to plan one year abroad that incorporates the requirements of two people sometimes seemed impossible. For us, the next step involved endless hours of research online, looking for a French university that taught physics in English (as my boyfriend didn’t speak French) and contacting both host and home universities. Our year abroad destination was thus decided on the basis of wherever my boyfriend could get a university place, as my plan was to find a job and/or study wherever we ended up. That’s how, after about six months of research, planning and the odd argument, we found ourselves side by side, a year together ahead of us, and on the train to Paris.

2. During the year abroad

Flat hunting
Having arrived in France, we were then faced with the mammoth task of finding somewhere to live. Seeing as we weren’t going to be based in central Paris, flat shares that would accept a couple were few and far between. Fortunately, the rent is also cheaper outside of central Paris, so we were able to find a flat with a reasonable rent and enjoy living just the two of us. Overall, this has been a brilliant experience and a good decision. Our relationship has strengthened, as we have overcome the challenges our year abroad has thrown at us as a team. While most couples do survive spending the year apart, difficulties can arise if the geographical distance leads to emotional distance, or if you have problems with jealousy or homesickness. Fortunately, by living abroad as a couple we were able to side step these problems; we have grown closer as a result of sharing new experiences, and have discovered each other’s strengths and weaknesses. Above all, we’ve had so much fun exploring the city together!

Avoiding arguments
The most important part of living together abroad successfully has been that we each have our own social and academic/work lives. When you arrive in a new country, it can be tempting to stick to what you know. The first few months of the year were undoubtedly the most stressful, which could have put added pressure on the relationship before we’d adjusted to living as a couple in a foreign culture. But we knew that in order to feel at home in France, we each needed to have our own circle of friends and our own reasons for being in France. We both attended uni in the first semester and this was a great way to make friends separately, although we do all go on nights out together too.

3. Looking back at the end of the year abroad

His perspective
One of the difficulties in studying abroad as a couple is trying to find somewhere to live that isn&39;t too far from where you both study or work. In our case, we at first searched for flats in towns that were mid-way between our workplaces, but this turned out to be a dead end. My girlfriend ended up making a sacrifice, as we decided to live in the town where I studied, meaning she has an hour and a half commute each way every day. To make up for this, I would try to do small things, such as get the food shopping done or cook dinner while she&39;s on the train home and have it ready for her if I know she&39;s had a rough day. I&39;ve learnt that the little things can make a world of difference.

Not being able to speak the language made things all the more interesting for me, as I met many good friends in language classes and on cultural trips, so I urge people in a similar position to throw themselves at any opportunities that materialise while studying abroad. You can get a basic grasp of the language quite quickly, which is enough to allow you to get around and explore the places of interest in the country by yourself.

Her perspective
When we were planning our year abroad, my biggest concern was that my boyfriend didn’t speak the language. In hindsight, this wasn’t as big a problem as I had envisaged; it’s far more important to be open to the culture and to new experiences than to be able to conjugate your verbs (although the latter does help!). While he doesn’t appreciate some aspects of life in France, he has been able to make friends from all over the world and study modules that weren’t available to him at his home uni. Although it has been testing at times, we’ll be talking about the amazing experiences we had on our year abroad together for a long time to come.