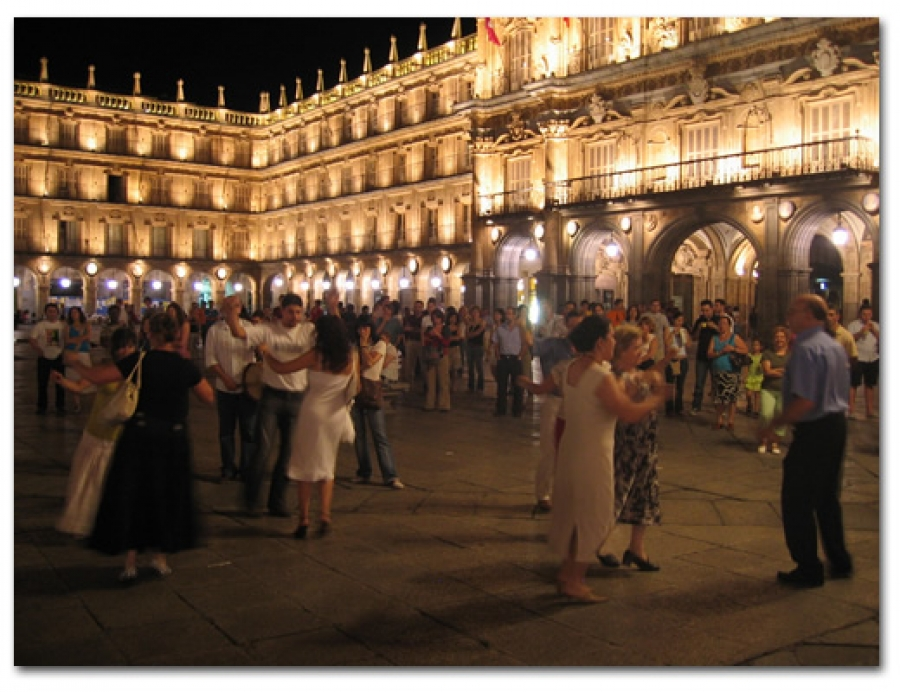 This article was written by Philippa Mann, published on 2nd January 2010 and has been read 4955 times.

Salamanca
Salamanca is a very fun, very beautiful town with possibly more bars than habitants. It was the European City of Culture and has one of the nicest (if not the nicest) Plaza Mayors in the whole of Spain!

I arrived two weeks earlier than the course start date to have some time to learn Spanish, as I studied from beginner, and was not very confident. I would recommend getting there in the first few weeks of September, just because there is a festival that goes on in the first/second week! It is pretty crazy: there are free concerts in the Plaza Mayor with generally good, famous artists (Jethro Tull played - my dad was so jealous!) I have some friends who arrived really late though like at the start of October, but managed just fine, although they found it a bit more stressful as they had to find a house whilst attending classes.

I stayed in Lazarillo de Tormes hostel. I booked myself in for three nights. This was ample time to find a flat.
Salamanca is set out with a big circular road around the centre, and then there are the outskirts. I'd recommend living inside this circle, just because it is easy to get to university and nightlife! The circle is only about 15 minutes walk from one side to the other - everything is extremely close!

Finding somewhere to live - there are a few different methods of finding a flat. Tearing numbers off flyers in telephone boxes works really well. There is a site with the university, but I found this to be out-dated really quickly. There really is no rush finding a place to live. Prices should be between €150-270/month, hopefully with €250 having bills included. A tip: when ringing, don't call between 2-4pm (siesta time), and when you get through just say "Hi, I'm ringing about the apartment advertised, where is it?" Don't pause for them to say 'hi' back.

By far the most difficult part of the whole Year Abroad is speaking on telephone when you get here, but don't worry! If I managed to get sorted with "hola" and "piso", I am sure that anyone can do it!

Another good thing to remember is that, in the unlikely event of not getting along with your housemates, it is unbelievably easy to move between houses in Spain. It is much more difficult to do so in England.

The Spanish do things so much differently to us! But if you just relax, it's fine! Basically, for the first few weeks you'll be popping into different classes trying them out. Then once you've picked, you talk to the Erasmus representative, who will stamp your choices (on a form that they give you in a meeting at the start of term. Should you miss this meeting, there's another one later on!). Then, you book an appointment with the general secretary who will register you (matricularse) in the courses. To give an idea of the time-scale this all happens in: classes started the third week of September, and I registered for my classes at the end of October! (You attend them before you register!)

It is a bit of a hassle picking courses, and I ended up missing a few that I wanted but it was fine in the end! Plus, in the first few weeks you have a language course, which is brilliant. However you do miss a few of your other classes as they run at the same time... But that is no problem, it is a good way to make a new friend asking to borrow their notes and repaying them with a drink or two!

Spanish courses I would really recommend are: La Enseñanza del Español para extranjeros, and Gramática Práctica del español. These two are brilliant courses for grammar despite being very similar although practically the same, with a comprehensive course on teaching Spanish to foreigners, going through tough grammar points, with a really nice teacher.

French studiers: There are some great courses available. I would recommend Morfologia Francesa, and Semántica Francesa - run by a lovely teacher who is really understanding and friendly.

If you are lucky enough to go to Salamanca, you will not miss out on nightlife opportunities. From jazz clubs, to bars, to nightclubs, you won't have a problem finding bars. Being a small city, with the majority of the population there as students, it is perfect to meet new people and enjoy the Spanish lifestyle.

Honestly, I really suggest staying away from the English speakers. From going from speaking nothing, to speaking fluently, I can really see the difference between my language and other people who knew much more before they came and yet struggle to speak with fluidity. I joined the University Big Band, but sports teams are always excited to receive new members!

Some bars to find: the Spanish "La Imprenta" (next to "Paniagua", in San Justo). "Daniel's" has Spanish music and a mix of foreigners go there along with the Spanish).

Once you receive a university card, you can open a bank account in Santander with that card! However, I only received my university card on 18th November, so you might just prefer opening one without it as it doesn't make any difference.

Nearly every Erasmus student I know bought the cheapest pay as you go phone (about €25, with €15 credit). If I went back again, I'd do the same thing! We all had the same ringtone and model, so be sure to decorate yours!
My other friend paid around €10 for a Spanish sim card with the same provider, so he could continue using the same handset!

I do warn that Spanish phone credit disappears much faster than English and so for ringing home, I would recommend Skype, or perhaps justcall.co.uk, if you have a landline in your flat.

Half a year or the whole year?

I stayed the entire year, which I loved. If you can only stay for one semester, the choice between first or second semester really is a tough one! I would say there is no difference, except that there are a few more students would go to Salamanca to study in the second. However, both semesters are full with students to socialise with.

You'll have a brilliant time, so don't worry! I arrived pretty much unable to communicate in Spanish but made lots of native friends through exchanges, going out (the thing is, going out means you speak Spanish, so the more you go out, the more you practise!) It is all about balance! Now, I can speak confidently without too much effort! So if you can already speak a little bit of Spanish, you're well prepared!

BE POSITIVE (smiling sends out a good message, even if you cannot understand what anyone is talking about)

RELAX (the more you relax, the easier you will find the change into a different culture)

BE PROACTIVE (make as much effort as you can to go to social events, the busier you are, the easier the adaption to a different culture, and the more chances you'll have to speak Spanish)

ENJOY (you're there for a year, make the most out of every opportunity!)

10 reasons everyone should do their year abroad in Salamanca