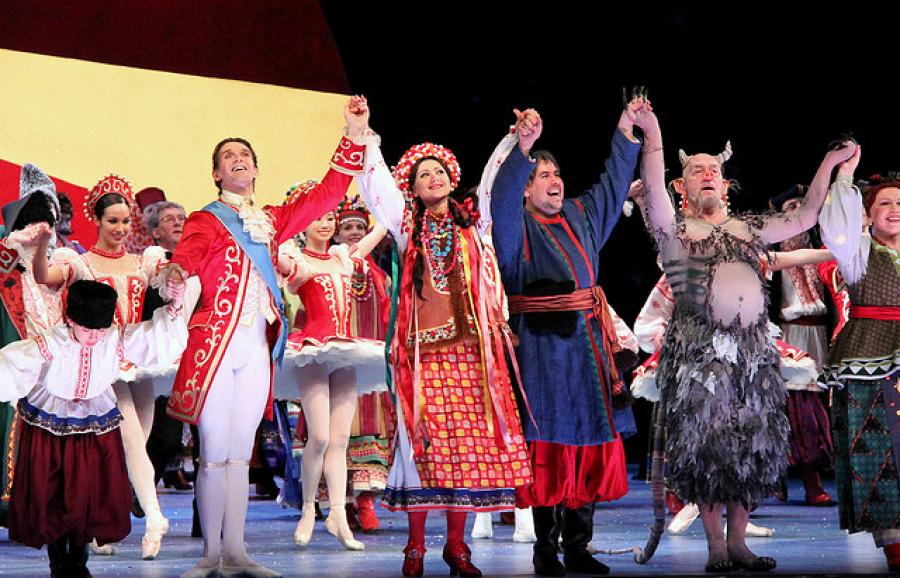 Curtain call - The Tsarina's Slippers, Tchaikovsky at the Royal Opera House by kotomi-jewelry

This article was written by Global Graduates, published on 3rd November 2014 and has been read 4303 times.

Russian YearOverHere
Russian speakers, check out this page for resources and UK-based event listings to help you practice your language skills and immerse yourself in Russian culture without leaving the UK!   Think we've missed something? Click here to send us your suggestions for listings!

Resources to help you immerse yourself in the culture

Use ListenLive to listen to Russian radio stations Read Russian newspapers online Check out the Russian Cultural Institute website for events and exhibitions. 2014 is the UK-Russia year of culture, so look out for special Russian events in the UK! Check out The Kompass (an online Russian magazine) for UK-Russian events Visit the Scotland-Russia Forum website for news of Russia-related events and notices (you can also visit them on Facebook and Twitter).

An all-Russian programme of music - both in programme and in soloists.

The former rector of the New Economic School, Sergei Guriev, will be in conversation with Gideon Rachman, Chief Foreign Affairs Commentator for the Financial Times.

All translators, at any stage in their career, are welcome to attend this Russian-to-English workshop; the only requirement is fluent English and a good reading knowledge of Russian.

Paul Keenan will examine the city's development as a suitable seat for the Russian imperial court and examine the relationship between Russia and Europe.

Witness the ballet classic with Tchaikovksy's famous score. If you can't attend in person, catch the live cinema relay on 17th March.

Freshly squeezed view from Russian music critic and socialist Artemiy Trotsky of what's really going on in Russia and around it.

Stuck in a loveless marriage to a local fisherman, only fear of the unknown keeps Elza from walking away. Then fate takes a hand… A modern parable, exploring one woman’s inner struggle with duty, love, loneliness and tradition, set against the beautiful, desolate backdrop of Kalmykia, a remote south-westerly Russian republic.

A new translation of Ivan Turgenev's play, 'A Month in the Country', translated by Patrick Marber, will be presented at the National Theatre. Cast includes Mark Gatiss ('Sherlock').

Nikolai Erdman's 'The Suicide' will be performed by the Central School of Speech and Drama MA Acting Classical class of 2015.

Adapted from a Russian folk tale, this outdoor promenade production, with singalong music and audience participation for children of all ages, tells the eternal story of of how good can overcome evil. Magical. Music composed by John Sampson.

The acclaimed Azerbaijani pianist Isfar Sarabski will take a break from studying at Berklee College of Music to perform at Ronnie Scott's jazz bar.

The live chemistry between renowned virtuoso percussionist Dame Evelyn Glennie and acclaimed Russian visual artist Maria Rud delivers a sound and image fusion that is truly unforgettable. Maria’s evolving paintings are beamed live, by projection artist Ross Ashton, onto the walls of the quadrangle of George Heriot’s School – a 17th-century architectural gem revealed for the first time to Festival audiences.

A good parody has to have to have four elements: it must make the audience laugh, surprise them with the plot, be better and show higher quality than the original, and the parody cannot become a mockery or public exposé. Contemporary? matches all of these criteria. This is probably the first time in Lithuania that three artists have cooperated to create a performance that looks at the Lithuanian contemporary dance scene with a self-ironic glance, quoting cliché movements, phrases and even costume details.

Nowhere are the decisions of the translator more forensically picked over than in a translation of one of the classics. Fortunately, Rosamund Bartlett’s new version of Tolstoy’s Anna Karenina is the most accomplished of several recent translations. Meanwhile Maureen Freely is best known for her translation of five novels by leading Turkish author, Orhan Pamuk. Both are exceptional translators and today they discuss their craft. Chaired by James Runcie.

In the workshop today translator and biographer Rosamund Bartlett looks at Anna Karenina by Leo Tolstoy. The novel portrays a beautiful and intelligent woman whose passionate love for a handsome officer sweeps aside all other ties – marriage, friendship and moral values.

The Russian trumpet star escaped from 70s Cold War USSR, got to New York, then toured the World with Art Blakey's Jazz Messengers for four years, recording eleven albums. In from New York with a top-notch, high energy five-piece.

Everybody knows that all the UK’s problems are caused by Eastern European immigrants with funny names and an annoying habit of working too hard. But who exactly are these people? What do they want from us? Featuring mean gangsters, glamorous ladies, romantic bricklayers and professional toilet scrubbers, Bloody East Europeans combines comedy, tragedy, Red Army songs, Ukrainian folk ballads and 70s disco hits to tell you everything you ever wanted to know about these strange and unpronounceable people. Performed by the Molodyi Teatr, a London-based Ukrainian company.

The Festival’s Honorary President, Valery Gergiev, and the outstanding London Symphony Orchestra bring the Festival’s Usher Hall concerts to a thrilling conclusion with music by two of the 20th century’s most dazzling, vibrant composers. Gergiev closes the performance with the unstoppable rhythms and searing orchestral colours of Stravinsky’s history-changing The Rite of Spring.

Culturologist Sergey Chesnokov was closely involved in the life of the artistic underground in Moscow in the 1970s-80s. In this talk, as a long-standing friend of the iconic Dmitri Prigov (1940-2007), he examines the principles which informed Prigov's artistic activity, and puts the fate of the Russian language, at the time long violated by Soviet propaganda, in the spotlight.

The Postman's White Nights won that years' Silver Lion at the Venice film festival. All its actors are non-professionals - they play local characters that make up Lake Kenozero's many isolated towns - places from which you can only reach the mainland by boat. We join the postman, the villagers' only connection with the outside world, on his day-to-day routes, and watch as stories unfurl, and unravel. In Russian with English subtitles.

The Scotland-Russia forum will be holding an open day so that prospective students can discuss Russian classes with tutors.

To mark his 90th birthday, the well-known Russian sociologist, political analyst, ballet critic and poet will read his poems and verse translations from English and German and answer questions related to other areas of his expertise.

“The Way to Ukraine”: journalist Sarah Hurst talks about and shows excerpts from her new film on the Russian citizens abandoning Russia for Ukraine.

Winner of Best Foreign Language Film award at the Golden Globes, Academy Award nominee for Best Foreign Film; lauded in the West, met with criticism from the Russian Ministry of Culture - Leviathan needs almost no introduction. Set on the remote Kola Peninsula, near the Russian border with Finland: Zvyagintsev's Cannes Award-Winner depicts the tragic conflict between an individual, and a corrupt system of power.

The Cosmonauts exhibition will reveal the most significant collection of Russian spacecraft and artefacts ever to be shown in the UK.

18th September: Vitaly Komar on 'Pushkin's Cat and Other Animals in my work', Pushkin House, London

As part of flamboyant and hugely influential art duet Komar & Melamid, Vitaly Komar was one of pioneers of Moscow conceptualism, the authors of ‘sots-art’ movement and some first performances and installations in Moscow in 1970’s. Vitaly Komar’s talk is expected to be, as usual, witty, playful and full of twists.

The Belarus Free Theatre will celebrate their 10th anniversary with a performance at KoKo, featuring a range of special guests.

4th November: "Workers on the Ideological Front”: The Soviet Censor after Stalin. Glasgow

3rd December: Dr Caron Gentry ‘The Politics of the Macabre in the Reporting on Chechen Terrorism.’ St Andrews