This article was written by Eleanor Cobbe, published on 9th May 2013 and has been read 2826 times.

Languages
Duolingo is a free language-learning website and crowdsourced text translation platform which purports to offer "Free language education for the world", and which is very popular with year abroad students. Ellie Cobbe spent her year abroad in Paris and Valencia, and went to Madrid as a Language Assistant after graduation. She blogged about the new Duolingo wesite on her blog, and here's her review for TYA...

Launched in beta form in late 2011 and still in expansion, the new online languages platform Duolingo is completely revolutionising the way we study languages online. Originally, when I first heard about it in early 2012, it was extremely exclusive and the developers were still working out the knots and tangles in the software, meaning they only allowed a small amount of users at a time to get cracking on their German, French or Spanish. The site has since exploded, with the addition of Portuguese, Italian and English for Spanish and Italian users both on the website and on the app.

Having seen the addition of Italian and English to the app, as well as the development of the software and interface, I can see Duolingo going from strength to strength. When I began, as a Beta user, the software was extremely buggy which made it difficult to progress. For example, the speaking elements on the computer wouldn’t work because Duolingo couldn’t detect my microphone. Duolingo seem to have rectified this by simply removing the speaking function on the website, which is a serious negative aspect of the program, although it is available on the iPhone App. Ironically, however, most people will probably have to turn the microphone off when using their iPhone for fear of looking a little err...unusual on their morning commute. The program has reached such a level of success and testing now, however, that those knots and tangles have been mostly brushed through.

The platform works on the basic principle that companies need their websites translating as much as people want to learn new languages. Therefore, why not combine the two? You, as a user, learn for free and up until March 2013 companies could upload documents for you to practise on, the basic theory being that if enough people have a crack at a translation, a general consensus will be reached. On top of this, users are given the option of voting on other peoples’ translations to improve accuracy and increase competition. Nowadays, Duolingo are cashing in on their growing success, charging companies for translation but allowing users to continue learning for free.

The language learning itself is simple, basic and suits beginner and advanced language learners alike. You begin with simple phrases such as “hello” and “please” and then move onto basic vocabulary like food and animals. Gradually, without even realising, they start to introduce you to new phrases using the vocabulary you have already learnt. Although this can lead to some strange sentence combinations (my favourite being, “Do you like that duck?”), bear with it. If you already know a bit, or a lot, of a language, you can skip ahead using the unlock function which just requires you to answer about 25 simple questions. Embarrassingly, considering I have a degree in French and like to think I can speak it quite well, I am stuck on level 5 of the French channel, having locked myself out of the advanced program with too many unsuccessful attempts. Other problems I’ve encountered are that the Spanish and Portuguese are based upon South American grammar/vocabulary which means you basically only hear the formal “vosotros” or “voce”, but luckily they won’t mark you as wrong if you write “trousers” rather than the American “pants” for example. 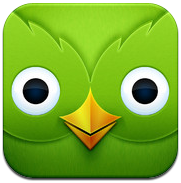 More information about the reasoning behind grammar issues is given on the website version than the App version too, so I would recommend beginners to a language use the website if they really want to understand how the grammar works.

Duolingo could be one of those things you spend hours on every day for a week and then never look at again, but they do try their best to keep you motivated. There’s a motivator running alongside you and daily emails to make sure you’re doing your language drills. It’s interestingly laid out and if, like me, you spend a lot of time commuting Duolingo could easily fit into your life.

If I haven’t convinced you by now, check out this hilarious Twitter account for some of Duolingo’s best, worst and downright confusing phrases.