One week down, many more to go! 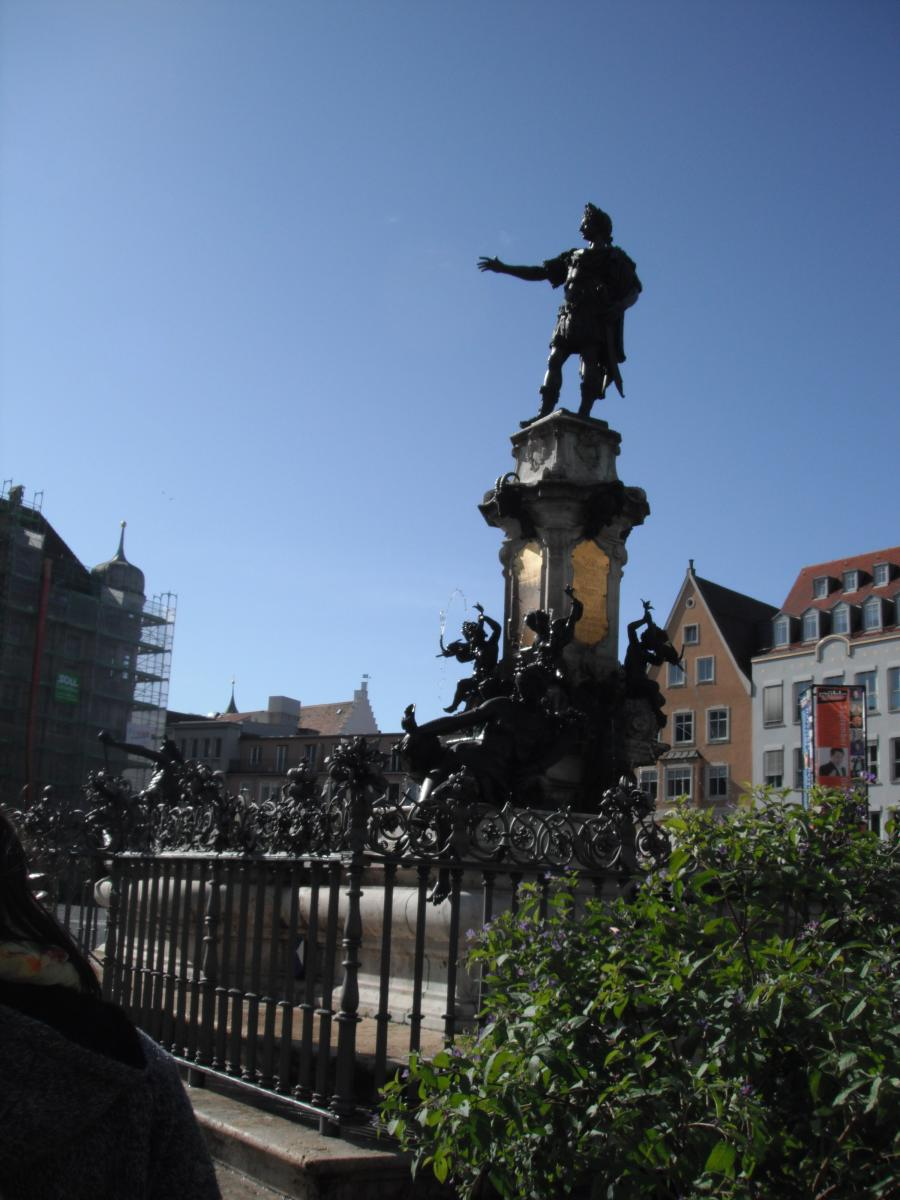 Rathausplatz in Augsburg by Taken by me

This article was written by Becky Keogh, published on 10th October 2011 and has been read 2968 times.

Augsburg Travel Journal Erasmus+
Hello from Deutschland! I actually can’t believe I’m here and have 5 minutes free to write this post. I’ve been so busy ever since I left Stafford a week ago and, to be honest, I haven’t looked back! I’ve had so much to keep my mind off of missing home that up 'til now, I hadn’t really thought much about it. I’ll run through some of the things I’ve been through so far, including a fair few things I didn’t actually know about until I got here.

My apartment in a Uni Wohnheim is fantastic, really. I couldn’t ask for more (except for decent internet and an oven!). It’s a bit like a little studio apartment with a big bedroom/living area, a little kitchenette and an even smaller bathroom, but I don’t spend an awful lot of time here (or at least haven’t so far) so it doesn’t really matter. My apartment is about a minute’s walk away from the uni, ten seconds from the uni tram-stop and about a five/ten minute ride into the city centre. Still, that hasn’t meant no 7AM wake up calls!

The first thing that’s probably best to say is if you have to make any payments to the uni for a travel card or student union membership, try and do it before you go. It does make life easier. I had to go through a bit of a hoo-hah with my buddy paying it on my behalf and me giving her the cash directly and most of my friends have had to pay a 10€ fee to make the payment without an account. It also gives you one less thing to do when you’re here, though you’ll still need to go and open an account once you’ve registered with the uni.

The next thing I will recommend you do is to get to your uni registration office a good half an hour before it opens, especially if you have a language course which starts at 9 and registration runs from 8:30-12:00! I went last Wednesday morning at 8:20 to find myself at the back of a big queue which got even bigger once the Spanish people towards the front decided to invite all their friends from behind me as well…So Thursday morning, I was there at 7:50. First in the queue by about 30 seconds! By 8AM, there was a relatively big queue so I’d recommend getting there ridiculously early just to get it out of the way!

Another thing to bear in mind is to do with mobile phones. Some people came over with unlocked phones, others came out with older phones they didn’t mind using. I tried to get my phone unlocked a couple of days before I came over and in my little town, they couldn’t do anything without sending it off. I brought my rubbish Russian phone over which can call, text and that’s about it, but I was a bit apprehensive about using it. I’m what’s known as a bit of a phone snob and I like a phone that can actually take photos and videos! With the Android revolution being so prominent at home and the price of Pay As You Go phones being ridiculously low in some cases, I thought that for about 60€ I could get a decent-ish Android phone on whatever the German version of Pay As You Go is. How wrong was I?! I went into the O2 phone shop across the road from me to be told the cheapest thing they had which wasn’t a ridiculously rubbish phone was a 66€ Samsung which has been out for a fair few years. To get anything like what I wanted, I was looking at upwards of 100€ which I just wasn’t willing to pay. The other thing I learnt is that the price of unlocked phones is actually about the same as their network-dependent counterparts and, considering I’ll be going back to Russia in February, I thought that I may as well invest in a sim-free phone and take my pick of the available networks. For 65€, I got a vaguely decent LG touch screen phone and a sim card for a network called o.tel.o. who offer phone calls to the landlines of 32 countries worldwide for 9 cents/minute. Also, it’s worth double checking if your phone doesn’t activate within a couple of hours. I waited two days before going back to find that the man who’d activated it for me in the shop had filled everything in but not sent it off so I was stuck in activation limbo! Once that was rectified, it was activated within the hour.

Another thing I've done is open a German bank account, which isn’t half as difficult as some people think it is! You go in, you make an appointment, come back, show your passport and German Student ID, answer a couple of questions and boom, done. Anything bank related should probably be the least of anyone’s worries as it’s so straightforward! Similarly, our uni required us to have a certificate of health insurance which, to be honest, sounds scary. All we did was go in, sit down, show our EHICs, give our German address and say whether we had any serious illnesses or were pregnant. We were in and out in ten minutes! The things that sound the scariest often aren't, and you'll find that a lot of places are used to the ERASMUS rush a few weeks before term starts so are willing to be patient.

The one thing I will say is be careful with pre-semester language courses. I can’t vouch for any other university other than Augsburg, as I have barely spoken to anyone else, but as far as here is concerned, I think it’s the only thing they can really improve on. Last Tuesday, we all took a placement test for this course to see which group (A or B) we were to be placed in. I found out on Tuesday afternoon that I was to be in group A which, you’d assume, was the top group. Or not, as the case was. My friends and I turned up to find that we were in a class with people who have been studying German for one or two years (not even that!), can barely string a sentence together and are about level A1/A2. One of the guys there flicked through his placement test, decided it was too hard and left after thirty seconds! And these people want to study Law and Maths in German…But I digress, it is INCREDIBLY frustrating when you’ve been learning a language for eight or ten years and you’re having to go through things you did in High School. It would be much better if the  uni offered an A course, a B course and a C course. At least then there would be a lot less frustration and smaller classes! Fortunately, the placement test for the Deutsch als Fremdsprache courses will give us a proper grade and will tell us which courses we can and can’t apply for, so at least that’s something! Besides, this course is free and sometimes, it’s nice to be top of the class.

At the end of the day, I can’t say a hell of a lot yet as it has only been a week! We all seem to have grouped off into nationalities for the time being, but I think that’ll change as we start our courses properly. We met one English lad the other day who’d decided his German was good enough to not need the course and had literally not spoken any English for the 5 days he’d been here. That’s dedication! However, most of us are going for comfort and safety at the moment and you can’t begrudge us that. Of course we won’t spend the entire time together and we probably will make German friends. I already have a couple with whom I try to only converse in German. It’s a nice confidence boost that whenever Mona goes with me to anything, the first thing she tells them is to just speak in German because I speak and understand it very well! I know my grammar isn’t perfect and it never will be – that’s what lets me down on these placement tests. However, I try my best and, at the end of the day, I know I can survive in Germany. I have the confidence, the random, useless vocab and, apparently, the accent, so I can’t go too far wrong!