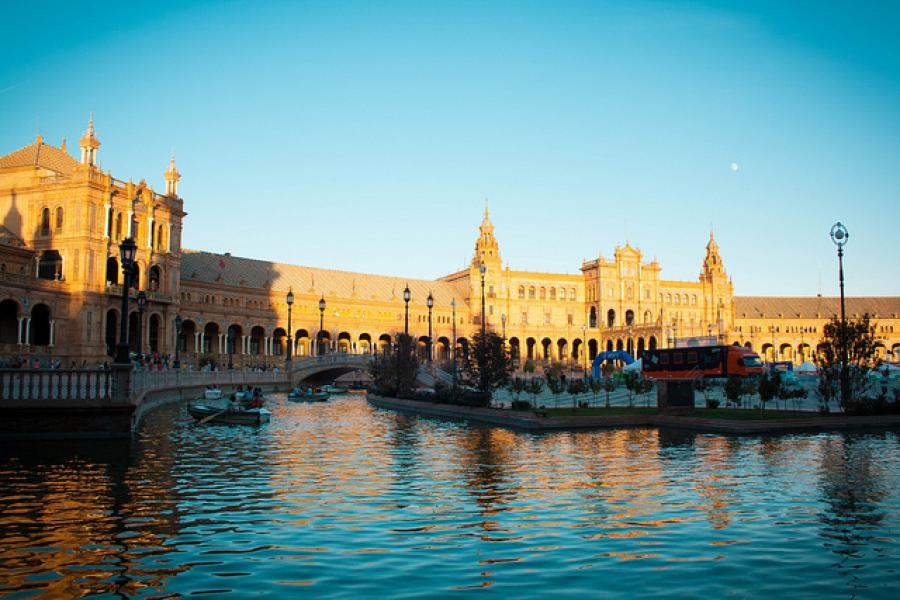 This article was written by Beth Sutton, published on 16th September 2016 and has been read 2500 times.

Seville 2011 Andalucia Leicester Uni Travel Culture My city
Beth Sutton is studying French and Spanish at the University of Leicester, and she has spent the past semester in Seville. Here are her absolute all-time favourite discoveries and best experiences in the capital of southern Spain’s Andalusia region.

An Erasmus student house in the residential neighbourhood of Nervión, just next door to a private cannabis club which is painted bright purple and accounts for the street’s herbal aroma.

It would have to be the Plaza de España. Used as a set in such hit films as Lawrence of Arabia and Star Wars, this might be the only building in the whole city which could match my ridiculous levels of drama, although never my levels of beauty. (Just kidding. I didn’t even know it was possible to feel jealous of an inanimate object before coming here.)

Any of the tapas from Bar Antiguedades on Calle Argota de Molina, with a special shout out to the stuffed mushrooms and seafood paella. My friends and I have been there so often that we’ve simply started referring to it as ‘our usual’, although the owners have yet to pick up on this which is a shame. You’d think five months of loyalty would be worth a cheeky 10% discount at least.

Not a Seville specific tip, but a general one for anyone living in Spain: 100 Montaditos. Literally ‘100 Little Bites’ in English, you can buy one tiny sandwich for a euro each on Wednesdays and Sundays, plus cheap sides and alcohol. Conveniently, there’s one located right opposite the old tobacco factory in Seville where language students have their classes. Four out of five stars*, would recommend to a friend.

*Had to knock a point off for the lack of functioning wifi. Nightmare for those of us without international mobile data packages!

Would you believe me if I said I hadn’t done much shopping while I was here? Unless, of course, you count food shopping, in which case I simply have not stopped since February. However, Beautik on Calle O’Donnell was a godsend when I ran out of dry shampoo. Perhaps it’s just the laziness in me talking, but I really can’t understand why something that I consider to be a staple product in my bathroom regime is so unreadily available in Spain. It’s almost as if people here wash their hair. Like, with actual water and everything. Weird.

6. First thing you do when you arrive?

The first thing you should do when you arrive anywhere…Eat. And drink. Preferably together. Bonus points for finding a nice bar down one of the side streets near the cathedral and not being guilt-tripped into giving money to the (rather aggressive) flamenco singers who hang round the area, preying on unsuspecting tourists.

Guys, let’s be honest: it’s Erasmus. There is no such thing as an ideal drinking spot. Rather, anywhere can be a drinking spot if you try hard enough. As you might know if you’ve ever been to Spain or were forced to talk about alcohol as your A-Level Spanish debate topic, Spaniards have got drinking on the street down to a fine art. Just two weeks ago I found myself outside the famous Torre de Oro at midnight, sipping vodka and coke from a plastic cup while confessing far too much in a bilingual game of Never Have I Ever. No regrets.

Firstly, let me point out how hilarious it is that you’re actually asking me for dating advice. Secondly, I would recommend a go on the rowing boats next to the aforementioned Plaza de España (unless, like me, you both have zero upper-body strength, in which case I’d skip the fun activity and head straight for the ice cream van next to it).

Sitting on a bench in the arrivals terminal and drinking a carton of chocolate milk, because apparently I have the palette of a small child. Eventually making my way to the taxi rank and finding someone to take me to what would become my home for the next twenty weeks. Speaking in Spanish and having the driver understand me. Thinking ‘Wow, this isn’t so bad! Maybe I’m not as terrible at languages as I thought!’. Being wrong.

You can go to the top of the Metropol Parasol – colloquially known as ‘las setas’ or ‘the mushrooms’ in English - in the Plaza de la Encarnación for just three euros, which includes a free postcard AND a glass of tinto de verano! It’s like all my favourite things wrapped up into one. Plus, unlike some of the other viewpoints in the city, it’s not actually too high up, which meant that even my extremely height adverse father was able to climb it without throwing up or fainting. Reeeeeesult.

The old Santa Cruz neighbourhood in the centre of the city feels very atmospheric, with its winding narrow streets and flower baskets hanging from the balconies. Formerly known as the Jewish quarter, it is now home to the Centro de Interpretación Juderia de Sevilla, which aims to inform visitors about the history of the city’s Jewish community. Not only is there a student discount available, the staff working there when I went were exceptionally friendly and eager to answer any questions we might have had. Small but worthwhile.

Casino which, contrary to what the name suggests, is not really a casino at all but an outdoor club overlooking Parque María Luisa. If you go on an Erasmus night, there’s a free beer bar until 1.30am and all you’ll need after that is €2.50 for a beer/shot combo – bad for your liver, great for your dance moves. Now is probably a good time to apologise for any injuries I may have caused while under the influence…not least to my dignity.

The nearest kebab shop. The cheaper and grimier, the better. Just please don’t make the mistake that I did of putting your durum wrap in your handbag ‘to save for later’ without wrapping it up properly in tin foil first. I was having to pick döner meat out of my purse for days afterwards.

14. What would you do if you were Mayor for a day?

I can’t lie, I’ve never been entirely sure what a mayor does beyond cutting ribbons. Still, I wouldn’t mind opening a few buildings and posing for a couple of photographs if I got paid for it. Probably not the most exciting answer, but I wouldn’t particularly want to change anything, just in case I accidentally caused an uprising or something. It might seem unrealistic but trust me when I say that is the type of thing that would happen to me.

After having locked myself out of my student accommodation in Canada at 4am last semester while in pursuit of a vending machine cereal bar, I have a slight fear of being locked in anywhere that isn’t my home, especially at night. If that wasn’t an option though, I’d go for the Supercor near me, because at least then I know there’d be snacks.

Feria in April. Possibly the most stereotypically Spanish festival you’ve ever seen, complete with flouncy dresses, flamenco, and – you guessed it! – more alcohol, this time in the form of rebujito (a mix of sherry and lemonade). If, like me, you’re a pasty English girl, I would suggest staying away from June to August, unless you’re planning on spending a lot of time indoors, crying into a puddle of your own sweat.

Lots of things, but especially the laidback attitude of the locals and the way you can justify almost anything with the phrase ‘I’M ERASMUS!’. Also, let’s not forget the food. And the sangria. Let’s definitely not forget the sangria.

The thing with a lot of the tourist attractions in Seville is that they’re normally touristy for a reason, so there aren’t necessarily any that I’d say are ‘overhyped’, per se. Be wary of the street performers near the cathedral though; a lot of them are broadcasting actual talents, but some of them just plain scary.

I literally have not understood a single thing a sevillano has said to me the whole time I’ve been here.

If you live a bit further out like me, you’re probably going to want to invest in a bonometro ticket, which for the price of €10, allows you to travel twelve journeys on the metro. If not, a single on the bus only costs €1.40 no matter where you’re going in the city (other than the airport), and most of the landmarks in the city centre are very walkable anyway.

The top of la giralda in the cathedral where Christopher Colombus is buried. It might take a few minutes to reach the top, but luckily it was designed back in olden days for horses to go up, meaning there are no stairs, only ramps. Not that I’m comparing you to a horse, don’t worry. I’m sure you’re much better looking.

Seville is full of unsung heroes, from the old woman whizzing around the city centre on a scooter built for children to the friendly Costa barista who let me have an extra scoop of ice cream for free. A special mention has to go to my sociology lecturer though, who would regularly walk out of class half an hour before it was scheduled to finish, and managed to combat student apathy by cracking up at his own jokes on an almost daily basis.

Well, technically Exeter is next up, but let’s say Italy because it sounds slightly more exciting.

Is travel writing a dying art?

Many blog authors earn money, usually through advertising once their blogs gain a big enough readership for companies to want to advertise through them! But of course there are still traditional trave...

Why working in a Summer Camp will boost your CV