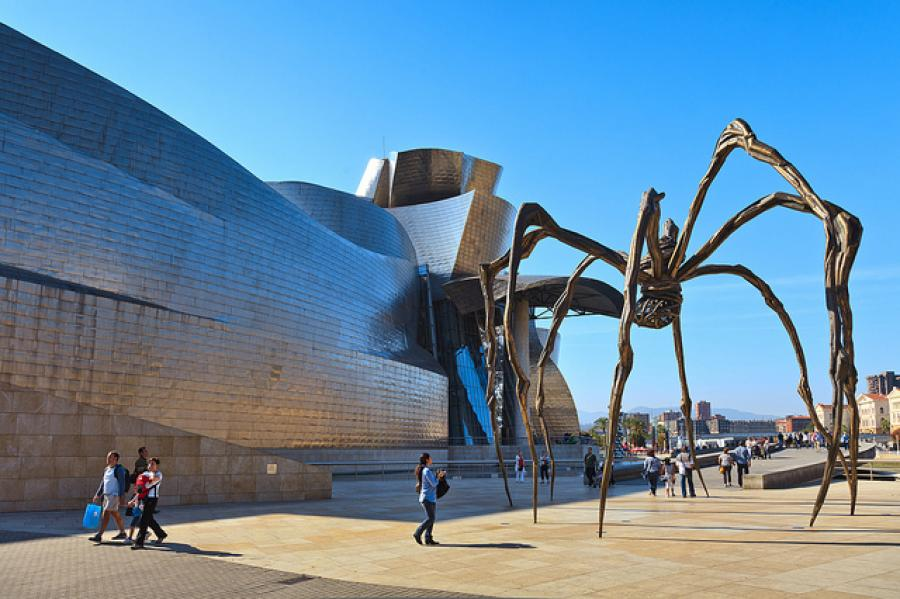 This article was written by James Barton, published on 23rd February 2016 and has been read 3121 times.

James Barton is doing Spanish Studies at Lancaster University, and is currently on his year abroad studying at Deusto University in Bilbao on a 12-month placement. Inspired by our article on using your blog to reflect on your year abroad, James has written this article about his time in Bilbao so far.

1. Home is...?
The beautiful barrio of Uribarri; a friendly community located 10 minutes uphill from Casco Viejo, the old town.

2. Building you'd like to buy?
There's a large Irish pub called Molly Malone found near the football stadium in San Mames. I'd buy it and turn it into an English pub.

3. Best meal?
I've had some amazing food here and I've also had some pretty questionable food as well - including some of the more outlandish pintxos. I think the best meal I've had was in a seafood restaurant in Neguri by the beach.

4. Best value for money meal?
100 Montaditos. To be honest, the food is terrible but on Wednesdays and Sundays everything is €1 and beer is cheap too, so I go quite frequently. Of course, pintxos are also a good idea. For those unfamiliar with Basque cuisine, a pintxo is essentially their version of tapas and can be found in bars for 1-2 euros.

5. Favourite place to shop?
I'm not a big fan of shopping, but the main shopping district would have to be Gran Via. There is a shop in Casco Viejo called Tiger which seems to sell everything and anything, so I get bits and bobs from there.

6. First thing you do when you arrive?
Head to my local bar where the bloke who runs the place will start pouring my drink before I can say "caña".

7. Best drinking spot?
Casco Viejo in general. There are dozens of winding streets littered with hidden gems, and there's always a good buzz about. Another great place is Pozas, where tonnes of people crowd the street outside the bars and there are often many Erasmus students to meet. Wednesday is the best night for Pozas.

9. Earliest Bilbao memory?
I arrived in time for the Aste Nagusia, a 9-day festival at the end of August. The whole city comes out to celebrate and drink. With amazing fireworks, huge marquees along the river and plenty of music, this was definitely one of the most memorable moments of my year abroad and I felt a long way from home. This year it takes place from 20th to 28th August.

10. Favourite discovery?
Sopela (also known as Sopelana to the locals), a town found towards the end of the metro line. It boasts three impressive beaches, where surfers from around the world gather to test the waters.

11. Best cultural spot?
I'm a big fan of Plaza Nueva in the old town. You can enjoy a kalimotxo (a bizarre yet delicious combination of vino tinto and coke) with a pintxo and look at the beautiful architecture around you.

12. Favourite club?
Definitely Sonora. It's a bit expensive and twenty or so minutes out of the city, but it's without a doubt the best club about.

13. Best place to end a night out?
Head to Mystic or Katu after the club. These places are always open well into the morning and always have some colourful characters up for the craic.

14. What would you do if you were Mayor for a day?
I would implement free parking all over the city. I've managed to acquire more than my fair share of parking tickets and even had my car towed once!

15. Building you'd like to be locked in overnight?
To be honest, I can't think of anything worse than being locked in a building overnight. I'm going to say Sonora.

16. Best time of year to visit?
End of August for the festival or Semana Santa.

17. Things you'd miss the most if you left?
The people are all really friendly and a good laugh, but I think I'll miss the cheap drinks more than anything else - even if they can't pour a proper pint.

18. Most overhyped tourist trap?
The Guggenheim. I'm not apologising, it's over-priced, pretentious and boring. Alright, the architecture of the building itself is pretty mind-blowing but I'm just not much of a fan of modern art.

20. Best way to get from A to B?
The metro here is great (it goes right out to the coast) and is open through the night on weekends. Saying that, most places are fairly easy to get to on foot.

21. Best view?
I've been lucky enough to live right by the entrance to the funicular, which you can find in Uribarri. It doesn't take long to get up to the top and the views of the city are breathtaking both at night and in the day.

22. Who's your local hero?
Either the man who owns my local or the owner of the kebab shop. It's difficult to choose between them. Both great men.

23. What's next on the list?
Complete my degree in Lancaster and then look into moving back home to Bilbao.

A day in the life of a Language Assistant in Münster

Using idioms during lessons as a Language Assistant

Articles and features we really need your help with!