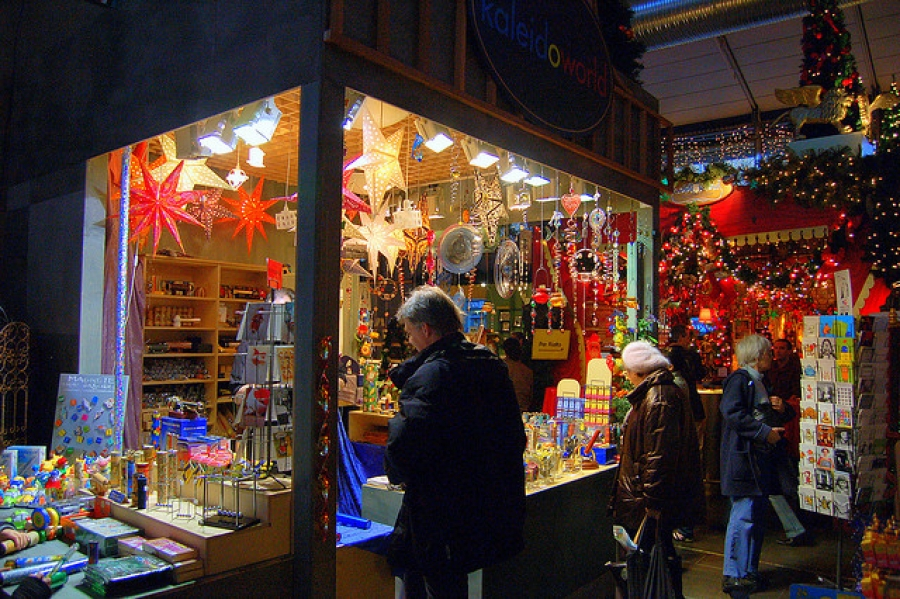 This article was written by Elen Roberts, published on 3rd December 2010 and has been read 33116 times.

Munich Mole Diaries Oxford Uni Germany
Elen Roberts is a student of French and German at Oxford University and is half way through her 7 month internship at Fujitsu Technology Solutions' branch in Munich, Germany.

First Impressions
I left rainy Wales in July and the first thing that hit me as I stepped onto German soil was the heat. It was over 30C in Munich, and humid, which is not what I expected from Germany. I adjusted beautifully and spent an idyllic summer cooling myself down after work with a litre (pints are apparently for wimps) of ice-cold “Radler” (a superior form of shandy) in the city's beer gardens whilst talking to my language partners. At the weekends, I swam in the Isar (Munich’s river) and lakes in the countryside, attended “Volksfeste” (drunken village gatherings) and hiked around Bavaria’s many forests. Although it is Germany's third biggest city (after Berlin and Hamburg) with a population of 1.3 million, it's blessed with plenty of green spaces and the stunning Bavarian countryside is easily accessible so you never feel hemmed in like you can do in other cities of this size. My favourite spot of all is the “Englischer Garten”, one of the world’s largest urban parks. It contains jogging paths, a restaurant, a beer garden, as well as a Grecian temple on top of a hill from which you get stunning views of the city centre. Nothing beats climbing up there and watching the sun set on a hot summer’s evening with your other half! On a clear day you can see the Alps in the distance.

The City
Munich is one of the richest (and on the downside possibly the most expensive) city in Germany and is often enviously described as “chicy micky” (posh/elite) by other “Bundesländer”. As the economy here is booming, it draws young people from all over the German-speaking world, which gives a very interesting range of outlooks, not to mention dialects! The architecture is a mix of meticulously reconstructed historic buildings and lots of dynamic modern landmarks. Typical red Bavarian tiled roofs dominate the city, which is littered with royal avenues and beautiful squares. The city centre boasts an array of famous buildings, including the “Frauenkirche” (the city’s Gothic cathedral with its green gleaming spires), the “Rathaus” (the town hall), as well as the “Isartor”, the gates of a Medieval fortress.

On the downside, accommodation is expensive and space is at a premium. It can be quite difficult to find a flat if you arrive at the beginning of the University term because you'll be competing with the students of which there are many - Munich boasts two elite universities, the Ludwig Maximilian Universität (LMU) and the Technical University (TUM) which between them have over 60,000 students!

The Bavarians are very proud of their regional differences. If you want to experience traditional German culture, this is where it’s at, especially if you venture out of Munich into the tiny villages where it is not uncommon to see people wearing “Lederhosen” and “Dirndls”. The country Bavarian dialect is lovely and lilting but completely incomprehensible to the non-native ear. The Catholic faith is also strong here; for example during their religious holidays, the nightclubs enforce a charmingly named “Tanzverbot” (ban on dancing after midnight), which I was not too impressed with. For me, however, the cultural (arguably!) highlight was definitely “Oktoberfest” – a huge beer festival where you dress up in Tracht, drink about 5 litres of beer (minimum) with your friends, try Bavarian culinary specialties that you would never allow to pass your lips sober and dance on the tables. Great fun.

Transport
The city has a U-Bahn (Underground) system, buses and trams. They are all fast, punctual and clean. The slight hitch: the U-Bahn only runs until 2am and doesn’t start up again until 5.30, which means getting home after a night out involves an expensive taxi ride or waiting until the morning. The cheapest way to travel is to buy a “Monatskarte” (monthly card) for about €33. Do NOT travel without a ticket, as the Stalinist-type inspectors can strike at random and will sting you for a fine of €40.

Going Out
Although Munich is said to lack the urban edginess of Berlin, the nightlife is plenty varied enough for most tastes. The “Kultfabrik” near Ostbahnhof for instance, is a complex with around a dozen clubs to choose from, and a variety of music. Entry is about €5. If you fancy something a bit more upscale, then I would suggest “Max und Moritz” or “Milchbar”, both near Karlzplatz. If you're looking for a more “alternative” clubbing crowd, go to “Rockstudio”, which plays mostly techno and rock music. There are lots of great bars in the studenty Schwabing area, including “News Bar” and “Pasta e Basta” which serve great food and aren’t too expensive!

Take a walk through one of Munich’s many parks e.g. Englischer Garten, Olympiapark, Botanical Gardens. They’re beautiful in every season.  Discover all the different beer gardens. Munich has 20 major ones. Try every beer. Oktoberfest is an absolute must even if you don’t drink beer in the UK.  If you want to try Bavarian food but aren’t hardcore enough to try the white sausages and Schnapps combination, go to the Hofbräuhaus in the city centre. There you can order a goulash or roast chicken, for example. If you’re here over Christmas, try out mulled wine at the traditional markets.  Go travel. Munich is within easy reach of Austria, Italy and the Czech Republic, as well as other Bundesländer. Deutsche Bahn is fast and reliable. You could even go skiing for the day just over the Austrian border.  Munich is a capital of culture so explore the museums, galleries, theatres and the state opera. On Sundays, the museums are free or have much reduced admission prices and in the evening, the Rosenheimer Theater offers a good impro theatre show.  Forget all your preconceptions about Germans, especially the men. They’re lots of fun!

by Charlotte Jones
Living and working in Germany