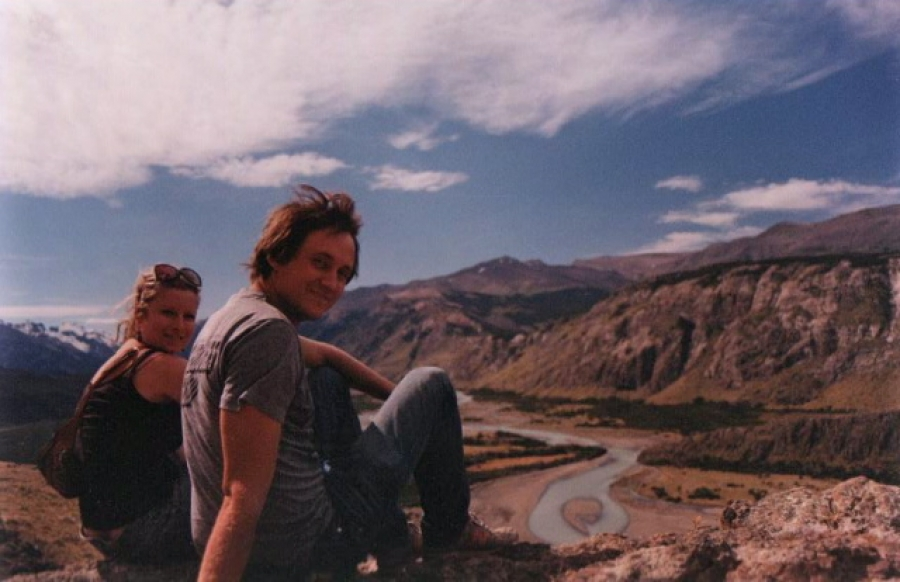 Mountains and Glaciers by Nick Goodchild

This article was written by Nick Goodchild, published on 19th April 2010 and has been read 4890 times.

Chile
Soundtrack: F*** Buttons - Space Mountain. Epic electronics for an epic landscape. “Down down down. Just keep going down.” Our philosophy remained steadfast and we continued ever southwards towards the tip of the continent. From Bariloche we took a bus for 5 hours to El Bolson, where we spent several easy-going nights. The best thing about the whole place was the campsite where we stayed, where we built fires and grilled the hell out of massive juicy steaks for dinner. The owner of the place, who I took to calling Esteban but whose name it turned out was really Daniel, sold us locally made beer in unmarked bottles for £1.50 a litre, the best beer we tasted in Argentina, and took pleasure in showing us his collection of wild boar heads mounted on the wall of his cabin.
“I killed these all myself,” he told us with pride. “I hunted them with nothing but trained dogs and a big knife.”

But El Bolson was just a stepping stone on our way to the heart of Patagonia. From there, another 26 hours South on the bus took us to El Calafate.

El Calafate is a tourist town built on the dollars of the Perrito Moreno glacier. This tiny place is in the middle of nowhere, but it has restaurants, hotels, a casino, an airport; thanks to tourists flocking in to see the world’s last advancing glacier. And we understood in a very real way where all the money was coming from - the trip from the town to the glacier was not cheap, never mind the entrance to the national park.

But it was worth it. Photos of the glacier don’t do it justice. An enormous river of ice which flows down from the mountains in a blue and white static wave, it ends in a jagged cliff 100 metres high, periodically dropping gargantuan ice-cubes into the milky cocktail which is the glacial lake. From the viewing platform you can stare it straight in the eye, with nothing between you but the abyss and the river below. Crack! A deep rumble like thunder. The glacier makes these noises as proof that it is still advancing, still flowing, and a second later you see a chunk the size of a house fall into the water from the face of the icy cliff, and send a wave rippling across the lake.

However incredible the glacier was to see up close, it was only a warm-up for what was to come. That evening we took yet another bus to the remote town of El Chalten, which sits at the foot of the Fitz Roy mountains. El Chalten is a strange little place: established in 1985 in order to repel Chilean attempts to claim the Fitz Roy mountains, it is only open during viable tourist months. The rest of the time it closes down completely; where the inhabitants go I could only speculate. Tourists are drawn to it for one thing only - hiking. And we were no exception.

After one night in a fairly shoddy hostel, we set about preparing ourselves for the hike. We bought food, rented a tent and camping stove, got information on what route to take from the helpful park information office, and set off into the mountains.

Our trek was the three day loop, camping for two nights and walking 10 to 15km per day, which would take us to the best viewing points the area had to offer. I’d be lying if I said it wasn’t tough - especially the first hour, which was a steep uphill climb, and not easy with our big rucksacks. But as soon as we reached the first little plateau I knew it was all going to be worth it. An enormous empty plain stretched out below us, mountains all around and rivers flowing down them. Three colours dominated our vision; the blue of the sky, the green of the grass and trees, and the brown of the bare mountain sides.

This place provoked in me a feeling that has been coined 'sublime'. It is a feeling of smallness, powerlessness, in comparison to the enduring vastness of the landscape. But it is a source of delight, it is an escape from the mundane. These great mountains have towered into the sky for thousands of years, disinterested in any of mankind’s attempts to conquer them. It is much the same feeling that I get by staring at the stars - the sense of space, the feeling of smallness, and the wonder at how such massive things can have come into existence. Alain de Boton put it like this: “Sublime places repeat in grand terms a lesson which ordinary life typically teaches viciously: that the universe is mightier than we are, that we are frail and temporary and have no alternative but to accept the limitations of our will.” Couldn't have put it better myself.

Not that the trek didn’t also have its difficulties. On our first night I woke up with a terrible pain in my stomach, and fortunately managed to throw myself out of the tent before being sick. It lasted most of the night and half the morning, which left me without much energy for the day’s hike, but I managed to slowly recover. I blamed X’s cooking from the evening before, although it hadn’t caused him, nor K, any problems.

Our other misfortune was far more dramatic, and also involved X’s cooking. On the second night, I was sitting in the tent resting while X and K were cooking on the gas stove. Suddenly through the opaque wall I saw a fireball and heard K scream. I jumped out of the tent, and there were X and K trying to kick the stove away because it was shooting flames out of the side of the valve.

“Get some water, quick!” shouted X.

We poured our limited supply of drinking water on it but failed to put it out. It was only when other people at the campsite noticed came running over that we managed to kill the flames by pouring water and throwing sand on it.

“That valve must be faulty,” said X afterwards. “Jesus, that was dangerous. It almost had my eyebrows off!”

That was the beginning of the end. We all knew that Fitz Roy was going to be our last proper activity, as I had to get back to Santiago and X and K were continuing further south to Ushuaia. We walked back into town the day after the exploding stove incident and took it back to the shop we rented it from.

“I’ll check it,” was all the man said in an unsympathetic tone, after we described our near death experience.

Then onto the bus back to El Calafate for one last night together.