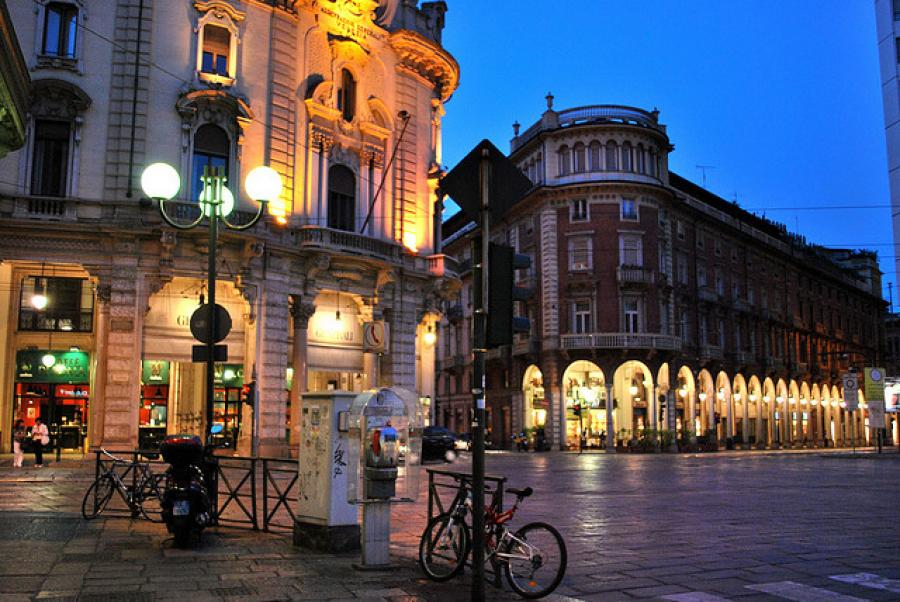 This article was written by Mari Eccles, published on 14th December 2011 and has been read 5664 times.

Turin Mole Diaries Warwick Uni
Mari Eccles is studying French and Italian at the University of Warwick and spent her year abroad as an Erasmus student at l'Università di Torino in Turin. She says "I liked the fact that I could study a real range of subjects but as there were so many students in each lecture, it was a lot harder to participate. For this reason, although studying helped with Italian comprehension, it wasn't so good for my spoken Italian, and so to improve that I would definitely recommend taking up an evening class or doing some volunteering to practise speaking." Here she passes on her top tips for student survival in Turin.

Having heard so much about the ‘industrial North’ of Italy, I landed in Turin expecting to be greeted by numerous grey office blocks, factories, maybe even a whippet or two. Instead I found a vibrant city with friendly locals, nestled in amongst the breathtakingly beautiful Alpine mountains.

What to do in Turin

This is the landmark of Turin and can be seen from anywhere in the city (particularly helpful if you are lost). In a past life, this statuesque building was a Jewish synagogue; today, it is the city’s biggest tourist attraction. You can get a lift up to the top for panoramic views of the whole city and the surrounding mountains.

Chocolate sellers come from all over Italy for this sweet treat. One of the highlights this year was a giant structure of Italy made of chocolate, created to celebrate 150 years of Italian unification. Sadly, we weren’t allowed to eat it but if you hang around for long enough (and are prepared to fight your way to the front) you can get plenty of free samples throughout the fortnight.

Turin is the Italian capital of cinema with its own film festival in November and the LGBT film festival held here in the summer. The Torinese honour their love of film with this interactive museum that is a great place to take your friends when they visit you. Highbrow? Perhaps not, but it is lots of fun.

This is the biggest square in the city and is constantly playing host to various celebrations. From the aforementioned chocolate festival, a Vespa convention, an ice rink and Christmas markets in the winter months and a pop-up beach in the summer, there is always something going on here. It is surrounded by excellent bars and is the lively heart of the city at night whilst in the day time it is a great place to enjoy a glass of wine or an ice cream and people watch.

These markets on Saturday mornings are a vintage treasure trove and make up for the overpriced high street shops in the centre (if you don’t like H&M and Zara, you’re going to have to travel to Milan to find any decent clothes shops). Ridiculously cheap, you can find plenty of oversized shirts, cardigans and Levi’s that would be on sale in British stores for ten times the price.

A foodie paradise, this gourmet supermarket in the city’s suburbs is popular with tourists and the Torinesi alike. Centre of the Piemonte ‘Slow Food Movement’, it is well worth a visit for those who want to experience real Italian food.

If you are willing to travel a little further afield, I thoroughly recommend you visit the orange-throwing festival of Ivrea (a medieval town, an hour away on the train). I can only assume that not much else happens in Ivrea as once a year, the whole town (and many people from the surrounding areas) dress up in medieval gear and pelt oranges at each other. It is an absolutely bizarre sight but definitely one worth seeing. Be sure to bring something red with you; this is a visible sign that you don’t want to have oranges thrown at you (unless you want to fork out €6 for a red cotton hat there, or you are completely mad and would like to be smacked in the face by a stray orange).

With its proximity to the Alps, Turin is the perfect base for first-time skiers and pros alike. I was most definitely one of the former and to anyone in that boat I really recommend getting a few lessons. The top of an Alpine mountain is not the place to be for someone who has yet to master the simple yet crucial art of the snow plough (again, speaking from experience). The nearest slopes are Sestriere and Bardonecchia (1 hr 15 and 1 hr 30 away respectively).

For me, this was the most daunting task of the whole year abroad experience. I had an idea of where I wanted to live and made that clear to the agencies. You tend to assume that these people want to help you out, but they have a lot of grotty flats in dodgy areas that they need to get rid of, and are happy to rent them out to Erasmus students. I found that they could be quite pushy so don’t let them force you into taking a room that you don’t want. Also be certain to ascertain before you take the flat if there are any charges you will have to pay. I was lucky with my landlord but a few friends of mine didn’t get their deposit back because of ‘administrative costs’, meaning that some of them lost out on up to €300.

An agency I would recommend is Sportellocasa. They offer advice to Erasmus students and ensure that you end up living with other students. They are located on Via Verdi (to the right of the main university building) and were very helpful. They also have English speakers in case your Italian is not quite up to scratch (as mine wasn’t) or have a nervous mother who is worried about the documents you are signing (as I did). Another agency that many people use is Fondazione Falciola (52 Via Sant’Ottavio). I went out at the end of June to find my accommodation which seemed like a good time to go. I was paying €320 a month without bills and I would say that €400 p/m with bills is about average for Turin, possibly cheaper further from the centre.

Turin is a terribly un-Italian city in that it is wonderfully straight-forward to navigate. If you do get lost in the centre, there is always the Mole’s spire to guide you. Travelling by foot is probably the easiest way to get around the centre, although there is a fairly regular tram and bus service. Each journey costs a fairly reasonable €1. Like most Italian cities, you have to buy the ticket beforehand and stamp it on your journey. For those of you with questionable morals, inspectors are rarely on board, so it is highly likely that you are able to get away without paying. I’d like to point out that I always, without fail, bought a ticket. If you are travelling out of the centre, there is also a metro line, although I only used this once or twice, on a trip out to Ikea (or ick-kay-ah as the Italians call it). Again, this is €1 a journey.

As one of the largest cities in Italy, it is apt that Turin has a lively club scene. For the best part of the year, the nightlife centres on the Murazzi, a stretch of clubs along the river. The concoction of very cheap alcohol and the close proximity to water sounds like a deadly one, although rather surprisingly I never saw anyone fall in the Po. The area has a reputation for being a little bit dodgy, so it is important to take good care of your possessions whilst you’re waiting outside. The most popular club here is Puddhu bar, which is home to a cross-section of pop, hip-hop and club classics. Another favourite amongst the Erasmus group was Alcatraz (again, this is typical club fare). Further down the Murazzi is Giancarlo. Drinks here are as cheap as €3 for a vodka mixer although be warned as there is generally a lot of vodka and not much mixer. Away from the Murazzi, there are further clubs in the city such as Lapsus (club classics in a giant warehouse). I found out about Lapsus through the Erasmus group in the city and there are lots of offers there for foreign students. Make sure you join the Turin Erasmus group on Facebook to find out about events and there is normally an Erasmus night at Bar Zero off Piazza Vittorio on a Tuesday. Go along there to find other students before you start branching off into other groups. If you are cool and are into dubstep music, you’ll love Gamma, a club in Parco Valentino that regularly plays host to famous DJs. If, like me, you still have the music taste of a fifteen year old girl, you’ll probably prefer Puddhu’s indie night every Thursday.

There are also a number of pubs in the city if clubbing isn’t your scene. Murphy’s Irish pub on Corso Vittorio Emmanuele is always stuffed full of foreign students (you can get an Erasmus card there for discounts), particularly Americans. Beamish on Via Maria Vittoria is more popular with the Italian students.

During the summer months, outdoor clubs open up in Parco Valentino, with Cacao being the most popular of these. It is always a good night out, but at €10 entry, perhaps a little on the expensive side for Turin (although like many clubs in Italy, occasionally cheaper if you are a girl which perhaps tells you something about Italy’s gender issues).

I was so nervous before arriving in Turin and I have to say, there was really no need to be. There is so much to do in the city and there were plenty more bars, restaurants and districts that I could have included in this guide – but I’ll leave them for you to discover!