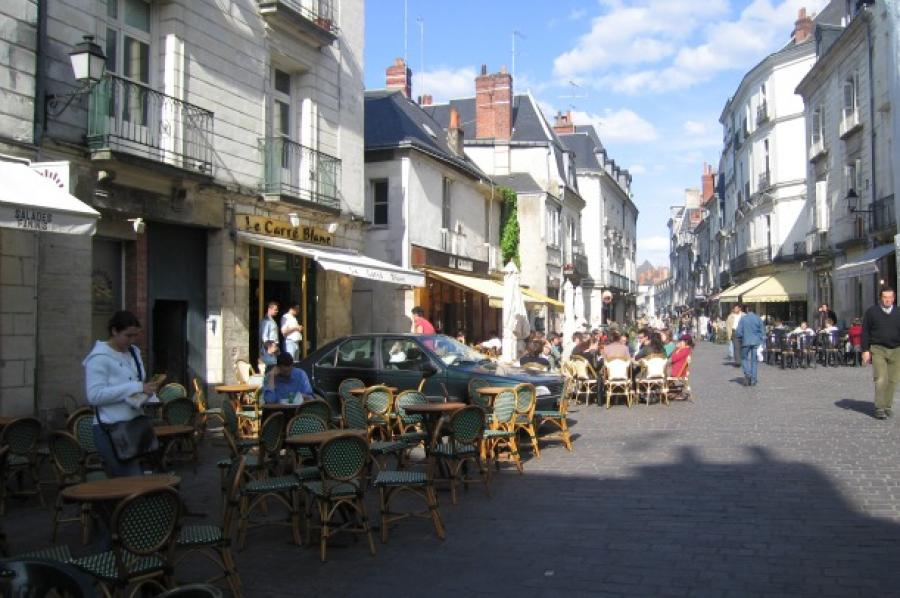 Place Plumereau, in the old town by france-travel-info.com

This article was written by Christopher Murray, published on 31st January 2012 and has been read 10984 times.

Mole Diaries Tours
Christopher Murray is studying French and German at Queen's University Belfast and is on his year abroad in Tours, France, for nine months. He says, "the vast majority of language students at my university spend the year as assistants, but I was more interested in the Erasmus experience so one of my lecturers set up a new exchange with Université François-Rabelais." Here he passes on his top survival tips.

The centre is made up of bustling, bar-filled Vieux Tours – the medieval city (which was actually destroyed in the war and rebuilt in the sixties, but don’t tell the tourists) and the quieter and even older cathedral district which dates from Roman times, both separated by the wide, modern shopping area around Rue Nationale. The first impression of this odd set-up might not be one of immediate charm, but after exploring the maze of old streets filled with minuscule bars and second-hand bookshops, and taking a walk on Ile Simon on the River Loire, the town begins to open up. The university has a fairly large presence and one of the campuses is in the city centre, which is apparently fairly uncommon for modern French universities, giving the area a real student vibe. Foreign students might be especially keen as the Tourangeaux are apparently known for speaking the purest form of French – by whose authority I’m not sure, but if you’re looking to hone that accent, this is the place!

The Université François-Rabelais is spread over several campuses, with science and engineering at Grandmont, law and economics at Deux-Lions – both of which are in the suburbs – and arts at Tanneurs in the city centre. In general the uni is very welcoming to international students. Registration is a bit long-winded and at times can seem chaotic, so be sure to bring along all the required documents as well as copies of anything you may have already sent, plus as many passport-sized photos as you can carry for your files, student card, Passeport culturel etc. Once enrolled, choosing classes is fairly simple as most lecturers don’t have a problem with you sampling classes during the first couple of weeks before actually committing, even outside of the UFR (department) to which you are attached. In addition to all the classes you would expect, there is a strong emphasis on international relations, theatre and cinema, and there is a wide range of UE libres (optional modules for non- specialists) from beginners Russian to children’s literature. Exams are a pretty casual affair and some modules only require an essay or an oral presentation.

The CUEFEE (Le Centre Universitaire d'Enseignement du Français pour Etudiants Etrangers) offers French classes for foreigners, students or not, and while it is debatable whether the course content is worth the €50 price tag, it’s a good way to meet other Erasmus students. It’s also possible for non-students to attend certain lectures at the university as an auditeur libre. There’s not much in the way of organised social events for Erasmus students, although the international office can contact host families and there is a buddy system between French and Erasmus students. I would advise taking advantage of this, as it’s quite hard to meet French students in class; lectures are rarely interactive and group projects are a rarity, so there isn’t much of a chance to chat.

The student residences are mostly in soulless buildings in soulless neighbourhoods on the outskirts of Tours, are rarely sociable, and are always empty at the weekend. Grandmont is the largest residence and has shared flats (notably with proper kitchens) and individual studios, while the Sanitas residences are a bit closer to town, but the area can be a bit dodgy. Quality does vary though, so you could hit it lucky, but if not, Erasmus students can cancel their contracts at any time and explore the alternatives. The youth hostel has long-term rooms and is across the road from Tanneurs, while Studéa and Estudines run private residences near the station. Good quality private accommodation is easy to find in Tours, and many student studios and apartments are found in the quirky medieval buildings in the city centre, for that authentic French experience. Available rooms are sometimes advertised on the notice boards in Tanneurs, but the websites appartager.com and leboncoin.fr are the best for independent searching, while bedandschool.com, a company based in Tours, can help you find a place and advise you on all the admin that comes afterwards… but at a cost!

As with university enrolment, in order to fix accommodation it is crucial that you pack copies of every document you can think of. Passport, bank statement, student card, letter from your university… and if you need a guarantor (not all landlords require you to have one but the university residences do), their financial details too, including a P60. Bear in mind that in some university studios you have to organise the electricity supply by contacting EDF; the staff may or may not decide to tell you. It’s best to do this in person at their store at the top of Avenue Grammont. Ask your accommodation provider if you’ll be eligible for a rent rebate from the CAF and try to have the forms ready as soon as possible after moving in, as they take several months to process and you can only get up to three months backpay. The CAF might ask for your long birth certificate and its French translation, and requires you to have a French bank account.

Place Plumerau in Vieux Tours has more bars and restaurants than you can shake a stick at and most of the seating is outside, so everyone can admire the crooked, wood- clad buildings and enjoy the very convivial (and safe) atmosphere, particularly on warm nights. Night clubs are mostly small and underground and some places have offers for Erasmus students. Cafés are abundant; it is France after all.

The Top Bars, Pubs and Restaurants in Tours

La Cabane: The bar where you always see someone you know. Students go there for cheap cocktails and beer towers. The bar staff are invariably friendly, but if you try to move the outdoor tables the manager WILL yell at you. Le Gros Bar: The signature drink is wine mixed with beer mixed with any flavour of sirop. It also has beer pong tournaments on Tuesdays and Erasmus night on Wednesdays. Aux Bords de la Loire: Outdoor bar which appears on the banks of the River Loire between April and October and usually has live music and even salsa dancing! Les Trois Orfèvres: Expect to hear something from the eighties followed by a Marilyn Manson classic, but if you stay long enough you’ll eventually hear a song you know. L’Instant Ciné: Independent café hidden somewhere near the cathedral which is also a DVD rental shop and serves the best chocolat chaud in Tours. Sandwicherie (on rue des Halles): Just your bog standard sandwich shop with a few unusual options such as Bolognese panini and mini chocolate cake. Restaurant Universitaire des Tanneurs: Okay, the uni canteen doesn’t sound like a great option, but the food is ridiculously cheap and not disgusting. Chez Gérard: The best value for regional cuisine, although you may not always be sure of what’s on the plate! Au Bureau: A French-meets-English pub; there are more authentic places to eat. Nonetheless, the food is delicious, cheap and the lack of regional specialities means it’s recognisable. Unlike most restaurants it serves food all day, so after pulling a student cost-cutting classic and missing lunch, this is the place to go for that early dinner. Mamie Bigoude: Really quirky and unique restaurant made to look like somebody’s house; you can even eat in the bathroom! Based around what must be France’s greatest invention: the crêpe.

Although Tours’ region, Centre, is not, in fact, the geographical centre of France, it is really well located for travel. Neighbouring large cities include Le Mans, Orléans and Angers, with Nantes and the west coast a bit further away but equally accessible. Most TGV’s depart from St-Pierre-des-Corps station, which is reached by a quick navette from the central station. From here, Paris-Montparnasse is less than an hour away and can cost as little as €16 if you book early and have invested in a Carte 12- 25. This Carte costs €49 for the year, and should pay for itself after just a few trips. There are also direct trains to Disneyland and CDG airport. The small airport in Tours has flights to Stansted and Dublin, and Spain can be reached by the night train which calls at the nearby town of Blois.

The passeport culturel costs €7 at the university cultural service in Tanneurs, and holders get reduced admission prices at cultural events and venues including museums, theatres and Studio Cinema, which shows English films in their original versions (i.e. subtitled in French rather than dubbed) as well as independent films.

The Touraine region and the larger Loire Valley are famous for two things: châteaux and wine. The châteaux are impressive to say the least, and are the best way to spend a Sunday, as absolutely everything else is closed. The most accessible from Tours by train or bus are Chenonceau (the second most visited château in France after Versailles), Villandry, Amboise and Azay-le-Rideau, but there are dozens to get through. The university and private tour companies organise excursions to the ones which are harder to reach. Many vineyards in the area, especially in nearby Vouvray, offer tours and wine tasting sessions (and if that’s your thing you can even do a module in wine tasting at the university!).