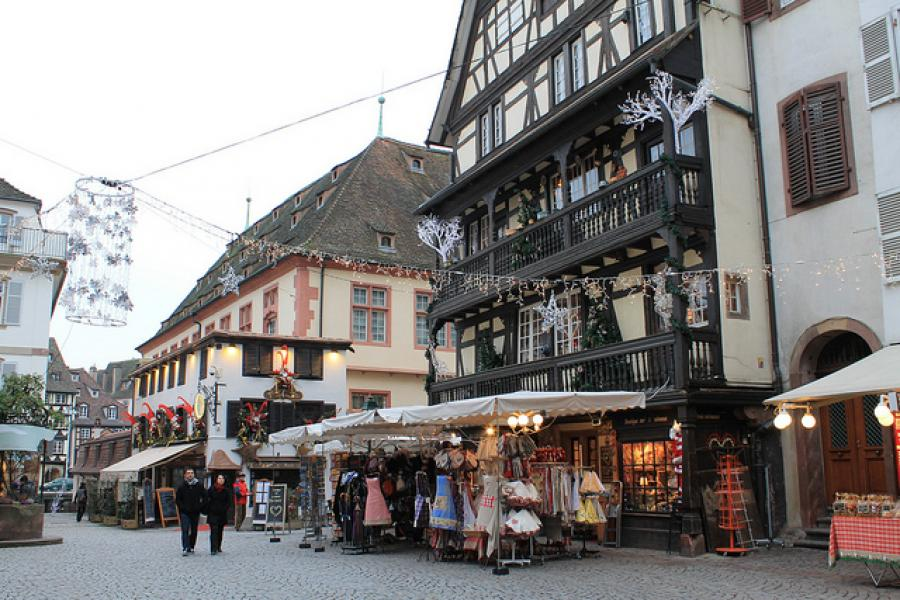 This article was written by Alexander Hylton-Holmes, published on 14th May 2013 and has been read 4928 times.

When I made my application to study at the Université de Strasbourg, I was informed, not necessarily wrongly, that it the city I was going to was a metropolitan student city with an open attitude among the people and the university. I was also told that the German influence on the uni was a positive one, making it one of the best kinds of institutions in France for further education. I am sorry to say that most of these glorified 'stories' about the city did not materialise in my experience.

The openness I expected to receive from the French was certainly closed off by the narrow mindedness of the right wing strasbourgois, the university was very disorganised and, for a student, living in such a city was an expensive feat. It was not all bad, though. There are some beautiful landmarks like the Orangerie, Cathedral, European Parliaments and Courts and the view from the bridges that connect the main city to the suburbs are wondrous. Using the bike service, Vélhop, was a fun and a very cheap way of navigating the city and fitting more into your day. There were many places to go for drinks, eat out and socialise which made for a particular light relief and for religious folk there is an international church in the center which is a good place to meet people.

I'm going to relay my experiences with three particular areas: accommodation, university and leisure, as I think that these are the aspects in which you will specifically relate to on your year abroad. I am writing from the perspective of a Black male, and I thought this would be a good platform to share my thoughts.

Assuming you aren't fortunate enough to get student halls provided by the university of Strasbourg itself, you have to begin the hunt for accommodation privately, which is initially difficult with the language barriers and technical terms. First, the accommodation ranges from €300-€500 per month and secondly, it is equally as difficult when you are an ethnic minority student, more so a Black student, trying to find a place.

It was arduous. I would ring various properties and, because they couldn't hear which ethnicity I was, I would be permitted to see the flat. I would see the flat, and be welcomed with smiles and handshakes but when it came down to me WANTING the flat they would always 'get back to me'. At another flat my friend saw, but which was too far out of his price range, the landlord informed us that Strasbourg was a staunch supporter of the 'Front National' and because we were a) Black and b) English we would find it hard to get a place to live. Taking that news, we were disheartened at the possibility of having to spend four months in hostel, even having to potentially give up and head home. This happened for ten days, and I was considering leaving to find a work placement when I came across a black landlord from francophone Togo and landlady from Martinique who were renting out a flat. On arrival, they flat out told us that Strasbourg was racist and in the end managed to give us the flat.

This was a huge eye opener. We weren't expecting to be treated like this for ten days in metropolitan France. We were made to feel as if we didn't deserve a place, that we had to give up and ultimately that we had made the wrong decision to study abroad in Western Europe.

Don't let this put you off going to the city; it's just a warning to be prepared for what is in store for you in this city. A small insight into the mind set of these particular people renting houses to students. In the end we found a place, so you could say that the lid was sealed on that particular issue but the resonant issue still remained. Strasbourg didn't want us living there, as of the three of us who were Black that went there, we all only managed to get Black landlords.

Strasbourg is a brilliant university with a diverse range of subjects, a multicultural student body and a very highly regarded reputation. However, their organisational skills are somewhat shocking. We take for granted the easy-come-easy-go student life in Britain where we choose modules and a computer or even a 'timetabling' team put together your electronic timetable, and there you have it: your very own schedule.

Strasbourg, on the other hand, puts up a confusing list on the wall, in an obscure hallway and leaves you to fend for yourself. By time you do figure out how to make sense of the timetable you find there are no more spaces in that specific class and so you have to readjust your whole schedule. This happened three to four times. Once you are done, it needs to be approved by every lecturer whose lecture you wish to attend, sending you on a wild goose chase around the university. Oh, and bearing in mind the classes started sometime ago putting you behind when it comes to the syllabus. You have a moment to breathe. You've had your paper stamped, and you want nothing more than to just attend the lectures and progress. Weeks go by and you realise that you feel alienated by the class and the teachers. They give you the impression that they don't want you in the class, to participate, to even show a vague interest in the course. My Spanish teacher who said that we, the two Erasmus students in the class, did not participate enough when there were teams of French students who didn't participate at all!

Personally, I found it difficult to make friends in the university, as I didn't feel as if the other students wanted to interact with me. I would make conversation, and generally be pleasant, but in the end I found it was all done in vain.

As an Erasmus student, you have to remember that the natives may not like the fact that you are in their classes, as it makes them feel like you either got there easier than they did or do not have to work as hard. Make sure that you prove that you deserve to be there no matter the temperature of your reception.

That being said there is a fair bit to do in Strasbourg. When you arrive to enroll at the university, the Erasmus administrator will provide you with a 'Carte de Culture' which gives you discounts off of bowling, cinema and many other cultural things in the city. The cinema has films in French Version Français (VF) or English with French subtitles (VO). It's located just opposite a shopping centre called Rivetoiles which has a multitude of stores and restaurants.

If you are feeling homesick, there are two Irish pubs in the city: Dubliners and The Irish Pub. You can go here to catch the football or rugby, get a full English or just enjoy the ambiance of the familiar English. It's a must see, I really do recommend it. As the transport in Strasbourg is pretty expensive, nearly everybody has a bike. The city bikes are called Vélhops and are only €20 for four months. They are an efficient and healthy way to traverse the city - just be careful of the trams!

Strasbourg is a beautiful city, and don't let what I have said put you off from going as these are just my own personal experiences. I just wish that I had been informed the same way as I am telling you now.