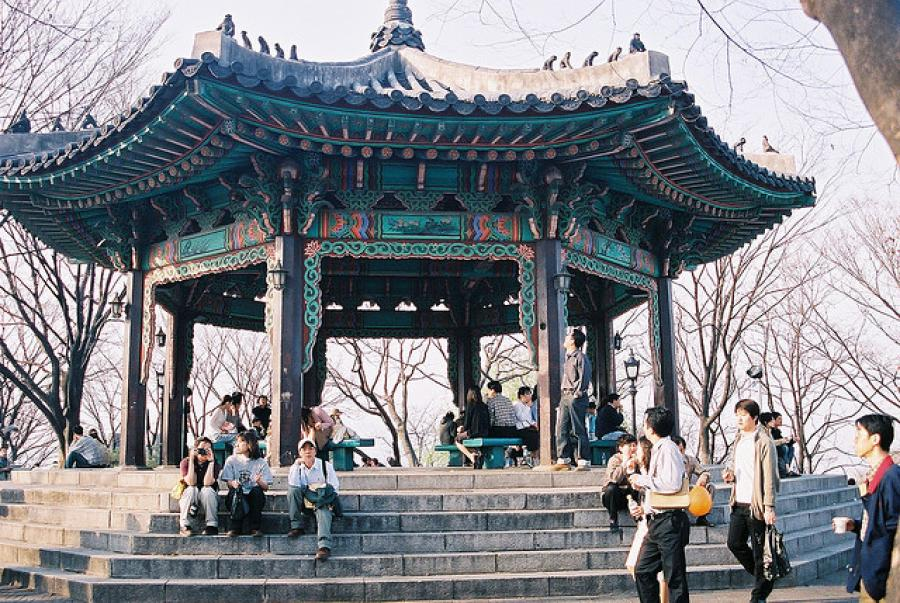 This article was written by Tegan Hedley, published on 29th January 2014 and has been read 8979 times.

English Mole Diaries Exeter Uni South Korea Seoul Korean Not a Linguist
Tegan Hedley is studying English Literature at the University of Exeter. She spent a year at Ewha University in Seoul, which she chose precisely because she had never been to Asia, knew nothing about Korea, and wanted to try something a little different. Here's her insider guide to living and studying in Seoul, the capital of South Korea.

Everything, or nothing at all. For girls, Korea is a shopping mecca, whether this be strolling around the super-commercial Myongdong district, the (cheaper) side-streets around Ewha University, or the all-night Dongdaemun markets. Sizes do tend to run very small, so be prepared to instantly transform from taking a small to a large the second you step off the plane. This seems to be particularly the case with jeans, regardless of how small you are to start with. Finding shoes may be challenging for ladies with feet any bigger than a UK 4-5, so you may want to stock up before you leave. Many of my male friends had similar problems. I was lucky - in being short with small feet, I was able to re-stock my wardrobe, but did have to pay to post things home, whereas taller friends had the opposite problem.

Vitamin tablets and paracetamol may be a bonus- experiencing extreme temperatures, and virtually isolated by its location, fruit and vegetables are sometimes hard to come by for a reasonable price as everything must be imported. Almost all medication is prescription in South Korea, including painkillers, so having your own is useful.

Many universities offer on-campus accommodation to international students. For me, this worked out to be the cheapest option, however it did mean compromising on personal space. It may also be worth checking the dorm rules for your university before you sign; Korea is still a fairly conservative society and some are stricter than others. You need to be comfortable living by them (although this doesn’t necessarily mean they are never bent).
If you would prefer to live off-campus, sites such as craigslist are useful for finding places, with rent varying dramatically depending on your location. The main setback with private rentals is that they require ‘key money,’ a deposit of sorts that can be up to 6 months’ rent.

Another option is a goshiwon, which is a cheap, but very small room that has a bed, a desk and a mini-fridge and a little room to stand, with a communal bathroom. These tend to be a little more private, however you’re often not allowed to bring friends over. In a similar manner, you could also stay in a hasukjip, which usually have slightly bigger rooms, and sometimes provide basic meals. Again they tend to be fairly cheap, but function more like a room in an old lady’s big house rather than an independent living space. Both of these options are popular with Korean students, so can be a good way to make local friends.

You will probably have trouble organising anything but university accommodation before you arrive in Korea, so you may want to stay in a hostel for a few days when you first arrive. Many people in my dorms stayed in university accommodation for the first term, but branched out for the second term once they had Korean friends to help them through the process.

Most of the students, myself included, were not language students. However, I would recommend making an effort to learn the basics in Korean. It’s a ridiculously difficult language to master - it took me four days to learn to say thank you - but making an effort to say hello or thank you goes a very long way. A taxi driver once gave me a free ride because he was so endeared by my incoherent attempts to direct him. Generally, English levels are not that high among people over the age of 35-40.

A lot of universities will offer Korean lessons to their international students. If yours doesn’t then perhaps try teaching yourself a little bit and finding a language exchange partner to practice on. A really useful app to have on your phone is KoreanLite, which has a list of useful words and phrases, as well as a person saying it for when your pronunciation goes particularly awry (and trust me, it will).

Most Korean apartments don’t have hobs or ovens, so you’ll more than likely be eating out most of the time, although delivery food is a massive thing in Korea and offered by most restaurants, even the tiny ones.

I warn you now, Korean food is either very spicy, or a little bit bland. Anything in between simply does not seem to exist. Local places are the cheapest to eat, and usually come with a variety of sides, including kimchi (fermented cabbage, you’ll learn to love it, I swear), ricecakes and beansprouts, which are generally refilled for free. This means you can usually order something little like meat dumplings (gogi-mandu) for about 3000 won (£1.70), and still get a full meal just relying on the sides. In general, vegetarian options are very limited in Korea, although by no means impossible to find.

Dish-wise, make sure you try jjimdak (chicken and noodle-y vegetable-y goodness), shabu shabu (which you cook yourself in a massive broth pot), bibimbap, and of course the standard but delicious Korean BBQ. There are also lots of low priced street food stalls, serving anything from battered prawns to fried silkworm, that stay open well into the early hours.

If you’re looking for Western food, Lord’s Sandwich near Yonsei University does the best bread in Seoul, and the best Bacon. Mexican food is everywhere and surprisingly well done. Hit up Battered Sole, in Sinchon, run by two British guys, for fish ‘n chips and mushy peas.

Essentially: expect to get a little bit fat if you’re studying abroad in Seoul, and embrace it heartily.

The main tipples of choice are either Soju, a 20% spirit that costs about £1 a bottle, or ‘magkeolli’, a Korean rice wine, often bought from a super-friendly drunken man that wanders around the Hongdae area late at night with a cart (I’m not even kidding). Be warned, there is nothing- nothing- like your first soju hangover. Fortunately, Haejangguk (해장국) i.e. ‘hangover stew’ will solve your woes; made of pork and coagulated ox blood and vegetables, it’ll sort you out but only if you can stomach it.

Located less than an hour from the centre of Seoul, and within easy reach by subway then a 10 minute bus ride, Bukhansan, literally meaning Bukhan-mountain looks over the city. The climb up is relatively gentle, apart from the final mile, at which point is becomes all rock-face and ropes. Nevertheless, the view from the top is well worth the climb; watch over the entire city, then turning 180 degrees to see nothing but mountains and greenery. Do as the Koreans do, and take sandwiches for the journey and magkeolli to toast the peak.

On Friday or Saturday nights this area comes alive with street musicians, food vendors, and bars-a-plenty. From the late evening onwards, the park in the centre of town fills up with young people sharing beers and soju. Bringing with it a general feeling of merriment, wandering down here with a couple of drinks is possibly one of the easiest ways to meet people in Seoul.

The National Park is located about 4 hours’ drive from Seoul, and home to the second highest mountain in Korea, a country over 70% mountainous. It’s well worth doing this in autumn, when the trees turn into a fiery haze of reds and yellows and oranges, and it’s not quite reached that bone-chilling, snow-inducing cold of the later months. With multiple trails of different intensities, the peak of Daecheongbong being by far the most strenuous, this area is commonly considered among the most beautiful in Korea, and makes a nice change from the crowded city.

Koreans love a good baseball game, and they do a match the way other people do festivals: singing and dancing and drinking and chanting and mascots, and an awful lot of fried chicken.

The most heavily fortified border in the world, no trip to Korea would be quite the same without it, and you get to stand in North Korea for a whole 5 minutes. We accidentally took a picture where we shouldn’t have and got told off by a gun-wielding guard- it’s the most badass I’ve ever felt.

1. DON’T only mix with international students.

It’s a very easy trap to fall into, but you’ll be missing out on so much of what Korea has to offer. The somewhat reserved Korean temperament can be difficult to get used to, but once you do the opportunities are endless.

You may not have as many contact hours as you would at your home university, so use this time to get involved with internships or voluntary work. You’ll boost your CV and learn so much more about the country. I didn’t do this as much as I could have, but one friend volunteered with an NGO that works towards Human Rights in North Korea.

Not only is it not done in Korea, it’s actually quite offensive.

4. DO be brave enough to try the jimjilbang - a naked spa and bathing complex.

It seems a horrifying idea at first, but after the initial stares (and shame) die down, you’ll forget all about it and it becomes really rather relaxing as you wander from pool to pool in the buff.

5. DO get out of Seoul occasionally.

You’ll be surprised by how different the country is outside of the crazy little bubble that is Seoul- try Busan for a weekend by the coast, or Jeju to experience ‘Korea’s Hawaii.’ Also, try to take advantage of cheap flights to other parts of Asia- a flight to Japan can be had for as low as £50, and I paid £90 for a return to Hong Kong.

What Teaching Resources should I Bring?

I was an assistant in a secondary school in Spain and I took typical English things for the students to see. For example; newspapers, magazines, train and bus timetables and tickets, leaflets, photos,...