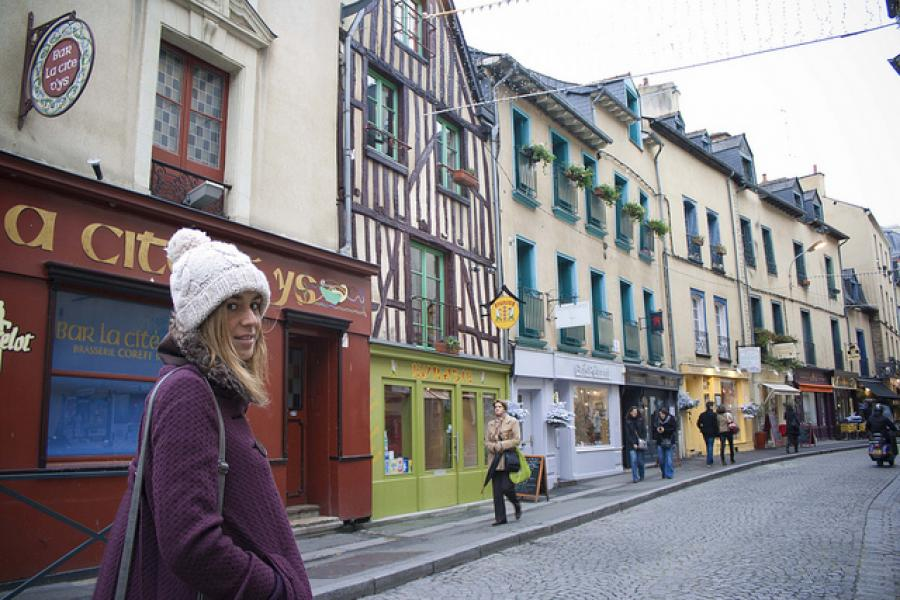 This article was written by Francesca Gillett, published on 26th February 2012 and has been read 10388 times.

Mole Diaries Rennes Exeter Uni
Francesca is studying French and Theology at Exeter, and is spending her year abroad in Rennes, France, as a British Council Language Assistant, teaching English to primary and high school students. Here she passes on her top tips about eating and drinking in Rennes, transport, accommodation and the best things to do while you're there.
The capital of Bretagne, Rennes is a vibrant city with a rich history and a beautiful historical centre. Due to its two universities, Rennes has a huge student population and so as a consequence has a buzzing and varied nightlife for all tastes.

The city is served by a SNCF rail station with high-speed TGV rail links across France as well as the the regular regional rail network TER. Within the city itself there is an extensive bus network as well as an efficient and clean metro system. Similar to Boris’ Bikes, a free bike rental service is available in the city; you can pick these up from the Gare SNCF or at several other points. Driving in Rennes is possible although rather hectic, but there are several car parks in the city centre.

There are several ‘Foyers des Jeunes Travailleurs’ across the city which provide cheap, basic but well-supplied rooms for young people. If you’d prefer to live with solely other students, perhaps consider contacting the two universities or the organisation CROUS, who provide accommodation to students across France. Alternatively, estate agents are always more than happy to help with the search for ‘location’ of an apartment or studio, as well as sites such as leboncoin.fr which has plenty of adverts. Of course the city centre is more expensive, with an unfurnished 4-bedroomed apartment on Rue Le Bastard (one of the main streets north of the river) expecting to fetch a rent of around £1,600 a month (plus bills). Further out of the centre, although still in walking distance to the hub of Rennes, places to rent are cheaper and quieter. Remember to apply for CAF (Caisse d’Allocations Familiales) at Rennes’ Centre de Securité Sociale and you could be reclaiming large amounts of your rent back for earning under the minimum wage.

Rennes is famous for both crêpes and galettes – the savoury version of the crêpe made with darker flour – and there are many places where you can pick up these traditional Breton delicacies. Crêperie St Anne, in La Place de Sainte Anne, is particularly good with an extensive list of fillings, and where you can watch the chef furiously making them fresh on site (see video below). Place de Sainte Anne is the main area for cafés north of the river, whilst the south’s equivalent is the beautiful, quaint Rue Vasselot with a variety of little restaurants and cafés. Like with any city, a range of different tastes and world cuisine can be found, from an American Diner to sushi bars.

To make you hungry, here's the Crêperie St Anne chef in action:

The aptly named Rue de la Soif, (Rue St Michel, off of La Place de Sainte Anne) is especially popular with students, and boasts bar after bar which come alive after dark. Thursday night in particular is a wild one on this strip, and as you squeeze yourself through the packed street you will be sure to be taken in with the buzzing, festival-crowd style atmosphere. After the bars shut, the former women’s prison Delicatessen is a good nightclub with lots of nooks and crannies to explore. With an indoor smoking room, the club Pyms is also great, as well as Espace, which despite being far out of the centre and has long queues, is large and plays excellent music.

Compared to the UK, spirits are shockingly expensive (don’t think you’ve misheard when they charge €20 for a double vodka and coke!), whilst wine, beer and cider are probably your best option. Breton ciders are commonly drunk, as well as beers mixed with a variety of syrups to make exotic-sounding concoctions such as a Monaco or a demi-pêche.

With its relaxed café culture, a casual wander around the impressive and old streets of Rennes makes for a lovely afternoon, whilst its parks are stunning. La Musée des Beaux Arts is home to an interesting collection of famous French and traditional Breton art, whilst the museum centre Les Champs Libres near the SNCF station often hosts interesting and cheap exhibitions. Head to CRIJ (next to Les Champs Libres) and enter the Zone des Jeunes to discover a range of volunteering and leisure opportunities for young people in the city. With a free loyalty card, the cinema Gaumount Pathé is cheap and surprisingly runs many original version English-language films which provide a refreshing break when too much French is making your head whirl.

Sports-wise there are well-equipped swimming pools and an ice rink, and for those who enjoy watching football the Rennes team often play at La Stade de Rennes, just a bus ride away. Grab a delicious galette saucisse at half time and make like a real local! For keen shoppers, the main street Rue Le Bastard is the best place to head to, with the more expensive boutiques on the streets breaking off. There are two main indoor shopping centres within the city; Place de la Colombia, near the Gare SNCF, and one near Place Hoche in the north of the city.

by Robyn McConville
Where should I go?

Why you should do a pre-arrival weekend visit