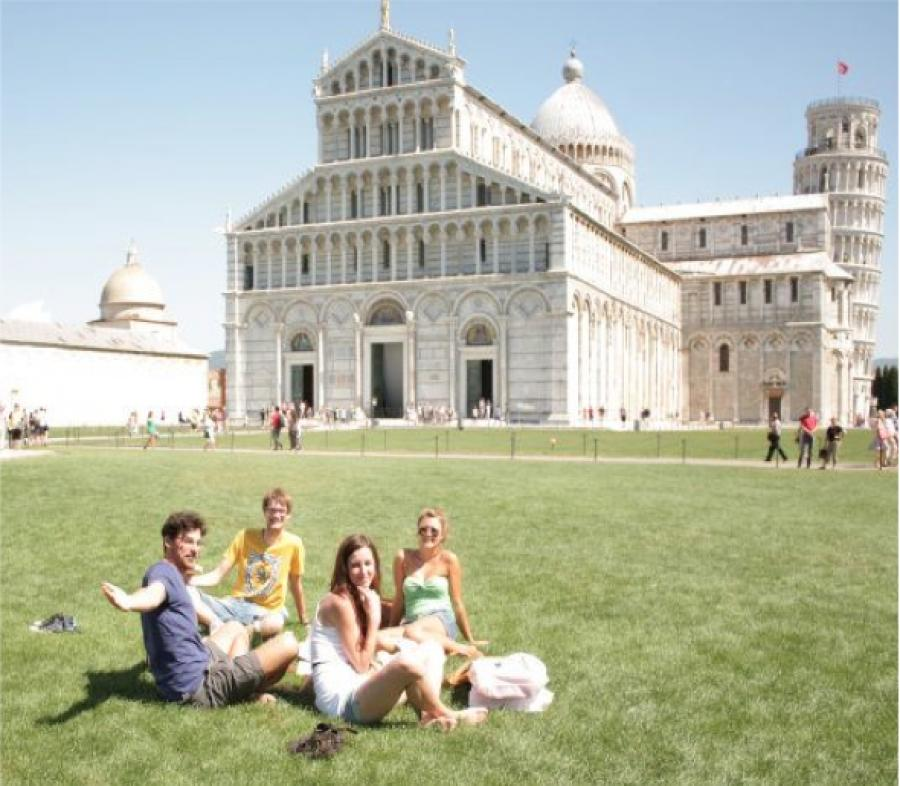 This article was written by Rachel Long, published on 3rd December 2011 and has been read 6849 times.

Mole Diaries Language Assistant Pisa Exeter Uni
Rachel is studying Italian and Spanish at Exeter University and spent her year abroad living in Pisa, Italy, and commuting by train to Viareggio where she was a British Council Language Assistant in a Liceo Scientifico. She says, "I did beginners Italian so I struggled at the beginning but I decided to stay over the summer (up until the start of 4th year this September) after my contract finished with the British Council in May because I loved it so much,and ended up being there for 12 months! I worked in a restaurant in Pisa over the summer for an Italian family and continued teaching English privately."

I like to think of Pisa as “Florence in a snow globe”. It’s every bit as typically Italian and magical as Florence, just a little cuter and cosier – and not eternally full of tourists! While visitors may only go to see the tower (which, of course, is a must for anyone in the area), there is a whole side to Pisa which is kept secret by the locals.

Where to go during the day

The wall along the river, which is more affectionately known as the spallette (little shoulder) by the locals: in the summertime it is overflowing with laughter and the musical sound of Italian chatter but it’s also the perfect place to natter to a friend in the early evening with a gelato.

If you’re looking for nice parks, Pisa has two which are very different but equally pretty and peaceful. The Piagge is a park which runs along the river (on the North side) and is a hot spot for locals to jog and walk their dogs; it even boasts its own outdoor gym which is good fun if you’ve never tried one before. If you go far enough, you will even find yourself staring at the lesser known second leaning tower of Pisa. For those less athletic among you, this park also has a little café which sits right on top of the river and is an ideal place for a catch-up over a lazy breakfast, or an aperitivo in the early evening. Lastly, the Giardino Scotto is what I consider to be the hidden gem of Pisa. Yes, it is rather small, but it’s a mini paradise with palm trees, fountains, picnic benches, statues, hidden corners, children’s play parks (with trampolines in the floor!) and even an outside cinema in the summer. As the weather improves it fills up with sunbathers, students revising and locals having their mother’s meetings.

What to do at night

Being one of Italy’s more prominent student cities, atmosphere at night is not something Pisa is lacking. Nightclubs however, are few and far between, so if late-night hard-partying is your thing, Pisa may not be for you.*

Piazza delle Vettovaglie is the hubbub of nightlife in Pisa for most of the year. On first impression this might make you laugh but go back two or three times and you will realise why. In fact, after a couple of nights there you will realise you recognise most people and have a huge network of friends. Piazza Garibaldi is another main social meeting point, about a stone’s throw away from Vettovaglie but most instantly recognisable due to its central location along the river and the glowing blue bar which stops you from ever getting lost. In the summer time everyone who’s anyone will be in Piazza dei Cavalieri. By day this is a simple piazza, home to a couple of museums and the Scuola Normale (Italy’s answer to Oxbridge), but at night it transforms into the playground of twenty-something Italians with guitars, bongo drums and beer, surrounded by a cloud of smoke. You will always find music and dancing on a summer’s night, and if you come on the right night you might even get served a glass of sangria out of a shopping trolley and get to join a game of Frisbee at 2am!

* If elegant clubs and all-night dancing is what you’re after, all is not lost! Buddy up with an Italian with a car and they will probably take you to the classiest and most famous clubs in Italy along the coast in Versilia, where everyone inside looks like a model. Remember to dress smartly though, you wouldn’t want to get turned away. For something a bit less glamorous but equally fun, there’s always the Disco Treno, a big night out in Florence organised once a term by the Erasmus Society.

Pisa is unbeatable for a good sandwich! You can either go for the local “piadina” which is effectively a delicious wrap filled with whatever you want. There are two piadinerie in Pisa so you will never be far away from a cheap, satifying bite to eat. However, the real treasure is to be found in Il Crudo which is along the river just past Ponte di Mezzo and is the most incredible sandwhich you will ever eat (or eat most of – they’re enormous!). For those with a sweet tooth there are obviously the gelaterie on every corner, which I became well-acquainted with throughout the year I won’t lie, but Dolce Notte is where it’s at. Open 4pm-3am (hence the name “Sweet Night”) it offers various pastries and its famous croissants stuffed with plain or white nutella – or both if you’re up to the challenge!

Avoid public transport at all costs! Taxis might as well not exist outside the big cities in Italy; never rely on them as a sure-fire means of transport. Buses are to be avoided where possible as they almost never run on time, if they come at all, with the exception of… Get the LAM Rossa bus to and from the airport. It comes every 10 minutes or so from outside the station – but be warned it doesn’t run very late into the night. Get yourself a bike. They’re about €15 from outside the mensa (the university canteen in Piazza dei Cavalieri). It’s not worth paying more because it will probably be stolen within a few weeks unless you get two chains for it (and maybe even then) or are smart enough to paint it an obnoxiously bright colour as soon as you get it so it’s clear it belongs to you. Don’t let the frequent theft put you off though, it’s well-worth having a bike to get around: you can fit more into your day, and it’s all part of the cultural charm. Use the trains to visit other parts of Italy. The trains in Italy are frequent and cheap, though not always reliable. Pisa is well-connected which makes visiting other towns relatively pain-free. A return ticket to Florence (which takes an hour each way) is €10. Get a Codice Fiscale. This is an official number that you will need in order to rent an apartment and sign any contacts. And don’t bother opening a bank account while you’re away if you can avoid it. It’s expensive and not usually necessary as landlords will take money in cash. Live with Italians! It’s the best way to learn the language as well as a great way to meet people. You also might be lucky enough to have them cook for you from time to time, or even share with you whatever regional dolce their nonna sent them back with after Christmas. Don’t feel like a failure if you need to change apartments during your stay. Most people I know (myself included) moved at least once during their year abroad due to demon housemates, nightmare landlords, bad location etc. Not to say that this will happen to you, but if it does then don’t feel like it’s your fault and you’re a failure if you choose to move. Go to the beach. There are several nice beaches close enough for an afternoon or morning trip such as: Viareggio (15 minutes on the train, about €2 each way), Marina di Pisa/Tirrenia (30 minutes on the bus from the bus station, about €2 each way). Take a course at the Uni. I didn’t actually study at the University of Pisa during my year abroad, but I did take a CLI course (an Italian language course offered to foreign students) which was fantastic and a great way to meet people, especially if you are working like I was. Try the aperitivi in as many bars as you can during your stay – it’s the best Italian creation since the Vespa!