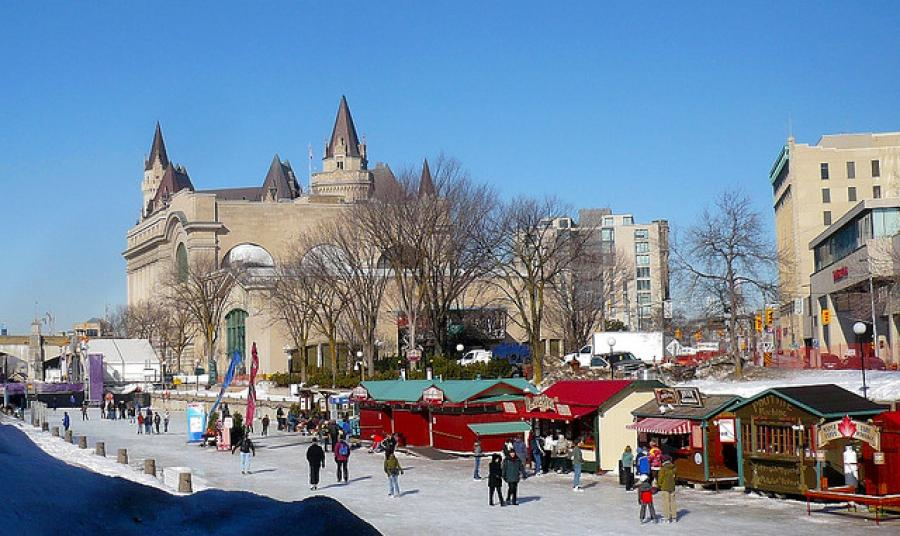 My exchange was at the University of Ottawa in Ontario, Canada, studying American and Canadian Studies. The first thing you should know about Ottawa is that it is the capital of Canada - no, it’s not Toronto I promise you- so don’t let the Canadians catch you thinking otherwise! Despite this fact, Ottawa is smaller than any city I’ve ever lived in, so does not feel like a traditional capital city.

Ottawa has a downtown, a centretown business district and a beautiful parliament building, yet all of these areas are extremely close together and very walk-able. Thus Ottawa has the great combination of having all of the facilities and features of a city you could ask for, with never needing a bus pass to get around them all! Obviously there are areas of Ottawa outside of the downtown bubble, but from my experience the only time you really need to get a bus is to visit Scotiabank Place to catch a hockey game (a must-do), and to the airport of course. Ottawa’s downtown area largely consists of the Rideau Centre mall and an area called ‘The Byward Market’, which is full of restaurants, bars and clubs. This (or Elgin Street) is where you will go on nights out.

Canada has well-known ‘party schools’, and though Ottawa is not one of those there are plenty of bars and pubs to have a good time in. The differences between the nightlife I experienced in Canada and that in England were mainly the fact that nights out were largely limited to weekends, and that there were no ‘clubs’ as we would describe them, but rather larger bars with dance floors. Furthermore, the nightlife in Ottawa didn’t seem to be aimed at students as it is in British cities, so no student discounts or drinks deals I’m afraid. Also, whereas Americans might have a reputation for being quite conservative drinkers, this is one of the ways in which the Canadians are more like us Brits; they enjoy their alcohol just as much as any British student!

Must do’s while in Ottawa

Though Ottawa is not a large city, it has its fair share of museums and galleries. You may be required to visit one as part of a University project as I was, and it was actually really interesting to learn about Canada’s first nations history at the Museum of Civilization- so that’s the first thing I’d recommend! Ottawa is in fact only across the river from Quebec, so get over the bridge at some point and you’ll be able to say you’ve been to two provinces! However, it is in the winter that Ottawa really gets interesting.

In the way of nature, Gatineau Park has some great winter activities which the UOttawa International Office set up whilst I was there - snow-shoeing is a must. Furthermore, you must definitely (try to) skate the Rideau Canal- the whole canal freezes over and for the couple of months it’s set-up thousands of people come to skate it. So go ahead and embarrass yourself with your lack of skating prowess while toddlers glide by with perfect technique - it’s a lot of fun.

There is also Winterlude (a Winter Festival) which is great fun and includes ice sculpting competitions and exhibitions on Canadian history, so lots of things to look forward to in the winter! Ottawa also has a NHL team, and since you can’t really go to Canada without witnessing an NHL game it is a must (Go! Sens! Go!). I would also have to include on this list trips to Toronto and Montreal. Montreal is a cheap two hour greyhound trip away and is a really beautiful city. Toronto is slightly more expensive to get to, and is around 5 hours away, but it’s Toronto, so go there!

The university itself is Campus-based so all of your classes will be relatively close together (end-to-end it takes about 20 minutes to walk the whole campus, so not intimidatingly large). Classes run for an hour and a half, and some run for a gruelling three hours, but you get used to it. They don’t have seminars like we do, just lectures, but apart from that I didn’t feel there was a huge difference in the teaching styles. As you have probably heard before, North American universities do require more work than the Uni’s here, but Ottawa I found to be reasonable, and I never felt too overwhelmed which was good. However, classes can start as early as 8.30 and end as late as 10pm, so be warned!

As I was going on an exchange for a whole year I was offered on-campus accommodation (single semester students won’t be), but I didn’t take them up on the offer for several reasons. Firstly, the price; as it is in England living off-campus is a lot cheaper than ‘Rez’ as they like to call it. Secondly, I was going to be turning 21 on my year abroad, I didn’t fancy rooming with first-year Canadians who were turning 18/19 and couldn’t even drink yet (legal age is 19). Thirdly, at Birmingham I much preferred the freedom of living in a house, so didn’t fancy going back to the halls lifestyle. (Note: I know people who lived in Rez and had a great experience, so this is just my bias)

The University provides a service where off-campus housing is advertised by students and landlords, and this is where I found my housemates. Sandy Hill is the student area, and close to everything you could ever need, and unlike the student areas in Britain it didn’t have a reputation for being dodgy or dangerous! Live there. The rent was similar to the rent I paid in Birmingham albeit slightly less; so as a reference point over $600 per month is a bit steep for the area. I loved living in a house, and the Canadians I lived with will be my friends for life, so I couldn’t recommend it more. Some people who do years abroad tend to stick with other exchange students, which though understandable is a mistake in my opinion. My advice would be to throw yourself into Canadian life, and the best way to do this is to live with some!

The winter in Ottawa deserves its own advice section, trust me. I am a keen lover of snow which was part of my decision to go to Ottawa in the first place, and it didn’t disappoint! The snow lasted for around 4 months and the temperature got to as low as minus 30 (though I was told on numerous occasions that my year was a mild winter). As this is an annual occurrence, you can sit back in wonder while the city doesn’t come to a stand-still or begin freaking out when it snows, and is instead prepared. You’d never have thought it living in Britain, but snow is actually manageable.

The main piece of advice in relation to winter is to invest in a good winter coat. This coat will be your best friend for a good few months, so choose wisely. I got mine for about $120 and I wouldn’t recommend spending a lot less than that, as you don’t want to be scrimping on something this vital. However, it will break your heart to spend so much on something so hideously practical. Ottawa really comes into its own in winter, so don’t stay at home in the warmth - get out and do winter-y stuff, it’s the Canadian Dream!