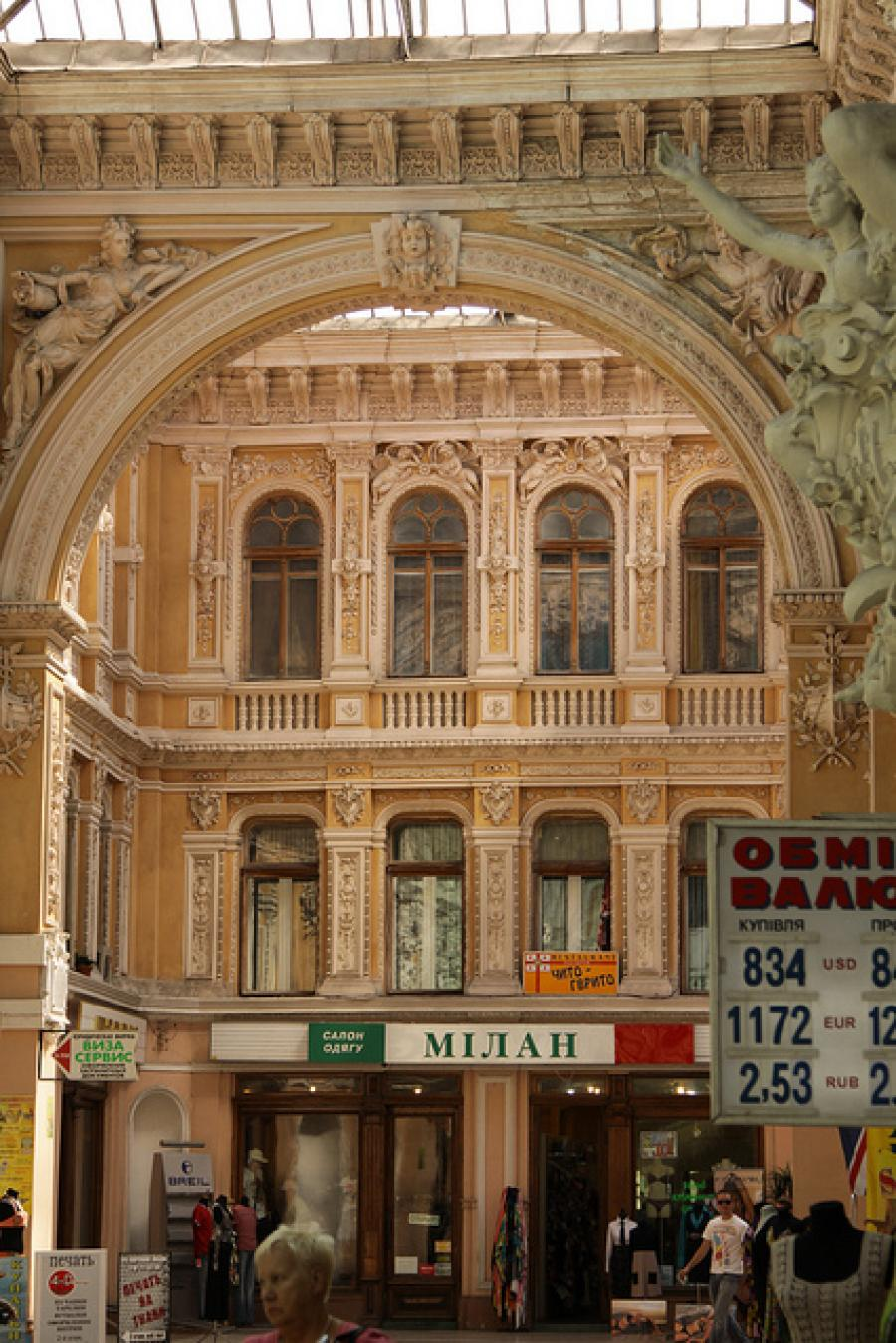 This article was written by Elise Morton, published on 15th April 2013 and has been read 10481 times.

Russian Mole Diaries Ukraine Odessa
Elise Morton is studying Modern and Medieval Languages at Cambridge, and is spending her year abroad between Paris, Odessa and Moscow, interning and teaching English. Here is her advice about living in Odessa and making the most of your time there...

Odessa is a port on the Black Sea in the south of Ukraine, but it is predominantly Russian speaking. I have seen billboards proclaiming “We are a Russian city!” in the centre of town, which helps to ease any fear you might be risking your Russian language learning opportunities by coming to Ukraine. With just over 1 million people, Odessa is big enough to keep you entertained, but easy to feel at home in.

Sadly there are no direct flights from the UK to Odessa, but it is not too difficult to find flights into the city with a short stop somewhere else e.g. Vienna or Istanbul. Although it may well take a bit longer, it is often cheaper to fly to Kiev and take the train down to Odessa. The length of the trip is between 8.5 and 14.5 hours depending on the service, but although the trains are not the speediest they are quite comfortable and have beds. I would highly recommend paying the little bit extra to sleep in the “Kupe” carriage as it is much quieter and more comfortable. Also, say yes when someone comes to ask if you want tea: it comes in traditional Russian tea glass holders and is definitely worth it for the equivalent of about 15p!

The two main options for accommodation are to rent an apartment or to live with a host. There are pros and cons to each. I have heard many different stories about living with a babushka, some of them involving only being able to shower twice a week, and almost all of them involving being force-fed borscht morning, noon and night. That said, living with someone who only speaks Russian is amazing for your language skills, and in this way I kind of wish I’d lived with a host. Plus, having a constant supply of cake may make up for the showering situation. In terms of which area to live in, if you’re lucky it is possible to find a reasonably priced room in the centre of town, but generally apartments are more readily available elsewhere. I’m living in Tairova, which is around 40 minutes by marshrutka from the centre. At first I was disappointed to be living so far away, but it didn’t take long to discover the cool things about this area. Wherever you are living, the likelihood is that you won’t be more than a bus ride away from wherever you want to be.

By far the easiest job to get into as a native English speaker in Odessa is teaching. There are numerous language schools who will be very keen to employ you! Although teaching is not my long-term goal, it was a fun, rewarding and at times hilarious experience which I would definitely recommend.

In terms of language, Odessan Russian does have its quirks, including an accent and a few special pieces of vocabulary, but it was interesting rather than problematic.

It is very easy to get a cheap mobile phone and pay as you go deals. You can top up your phone at any of the machines dotted along almost every street.

The main methods of transport in Odessa are the tram, trolleybus and marshrutka (somewhere between a bus and a taxi). Transport is incredibly cheap, if not always very comfortable. Here is a really useful website to find the route you need. From Odessa you can also travel easily to Moldova and Crimea, as well as to a range of other Ukrainian cities.

What is there to do in Odessa?

Two of the most notable are the Museum of Western and Eastern Art and the Archaeology Museum. For a more active history experience I would really recommend a trip to the Odessa catacombs. Stretching around 1,500 miles in length, they are the largest labyrinth of man-made tunnels in the world.

For the less museum-inclined (like me), this is a great city: to experience Odessa the best thing you can do is walk around. The centre is full of beautiful architecture. Walk along Deribasovskaya, a wide pedestrianised street with cute cafés, the City Gardens and the stunning Bolshaya Moskovskaya Hotel. Another nice stroll is along the Primorskiy Boulevard, where you will find a statue of the Duc de Richelieu, one of the founders of Odessa. You will soon come to the famous Potemkin Steps. Two things to remember are that the steps look way more impressive from the bottom, and that racing up them is a must (so remember to take a friend with you, racing alone or against one of the many city cats is considerably less fun). In the city centre you will also find the stunning Opera House and the Preobrazhensky Cathedral, as well as Tyoschin Bridge, where lovers place padlocks. If you take the time to have a wander, you will find some real gems.

As well as great streets, Odessa has some lovely parks. Near to the centre is Park Shevchenko, which is also home to the Chernomorets stadium and joins up with some cool beaches. My favourite park though is down in my neck of the woods, right in the south of the city. The 411 Artillery Battery Park is the home of tanks, a plane, missiles, bunkers, a very retro tram and makes for a very good photo shoot location! 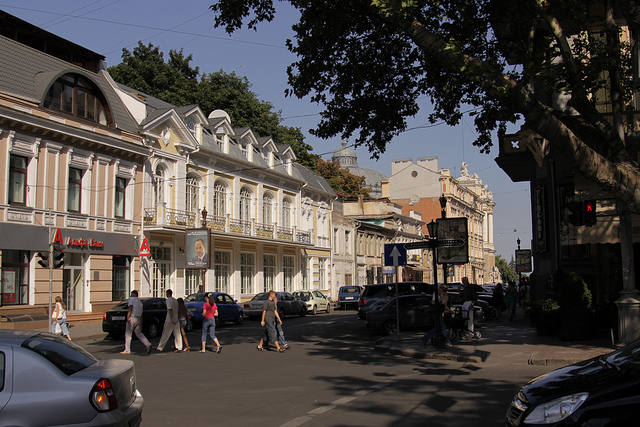 Photo, above, of Odessa by odessamax

You can get very reasonable tickets to see the opera or ballet in the stunning Opera House. The Philharmonic is also worth a visit, if you’re into classical music or just like to pretend to be cultured.

Although I’ve never been here to experience it, rumour has it that the city comes alive in the summer. I’m told that temperatures frequently get into the mid 30s and that the beach is the place to be. The most popular beach is Arcadia which is easy to get to from the centre of town on tram 5 and trolleybus 5 and 13, and has quite a few bars and restaurants.

The Privoz market by the train station is definitely worth going to, it is full of colour and also a good place to get a free lunch! Fill up on samples of everything from cheese, the Ukrainian equivalent of baklava, smetana, fresh avocadoes and mangos to chocolate cake. If you’re looking for a good fake Prada handbag or for some haggling practice, head to 7km market, which is one of the largest markets in Europe. Although it is a little way out of the city, it is easily reached by marshrutka.

Be at one with nature?

Apparently the dolphinarium here is excellent!

I purposely left this until last, as it seems to be what I spend a lot of my time in Odessa doing. The food here is AMAZING and so reasonably priced. You should take advantage of the abundance of Georgian food and eat your fill of shashlik (grilled meats) and khachapuri (the most amazing cheese bread). Some restaurants to put on your ‘To eat’ list are Fat Mozes (great name), Bufet (the one on Panteleymonovskaya) and Dacha. Puzata Khata is a chain of self-service restaurants which serve great Ukrainian food for very little money, and if you feel like treating yourself to a nice breakfast then definitely check out the breakfast deals at Kompot. Many places offer a good ‘Biznes Lanch’ menu, which is worth doing even if just for the amusement of asking for it.

One last thing to note, the people here are some of the friendliest I have encountered. Even if you do occasionally meet a surly shop assistant who cannot fathom why that foreign looking girl is looking at her so blankly, if you only ask people will go out of their way to help you.

All of this could be yours for up to 90 days, without even the need for a visa!

Check out Elise's blog, marmiteandtea.blogspot.com, for her latest update.