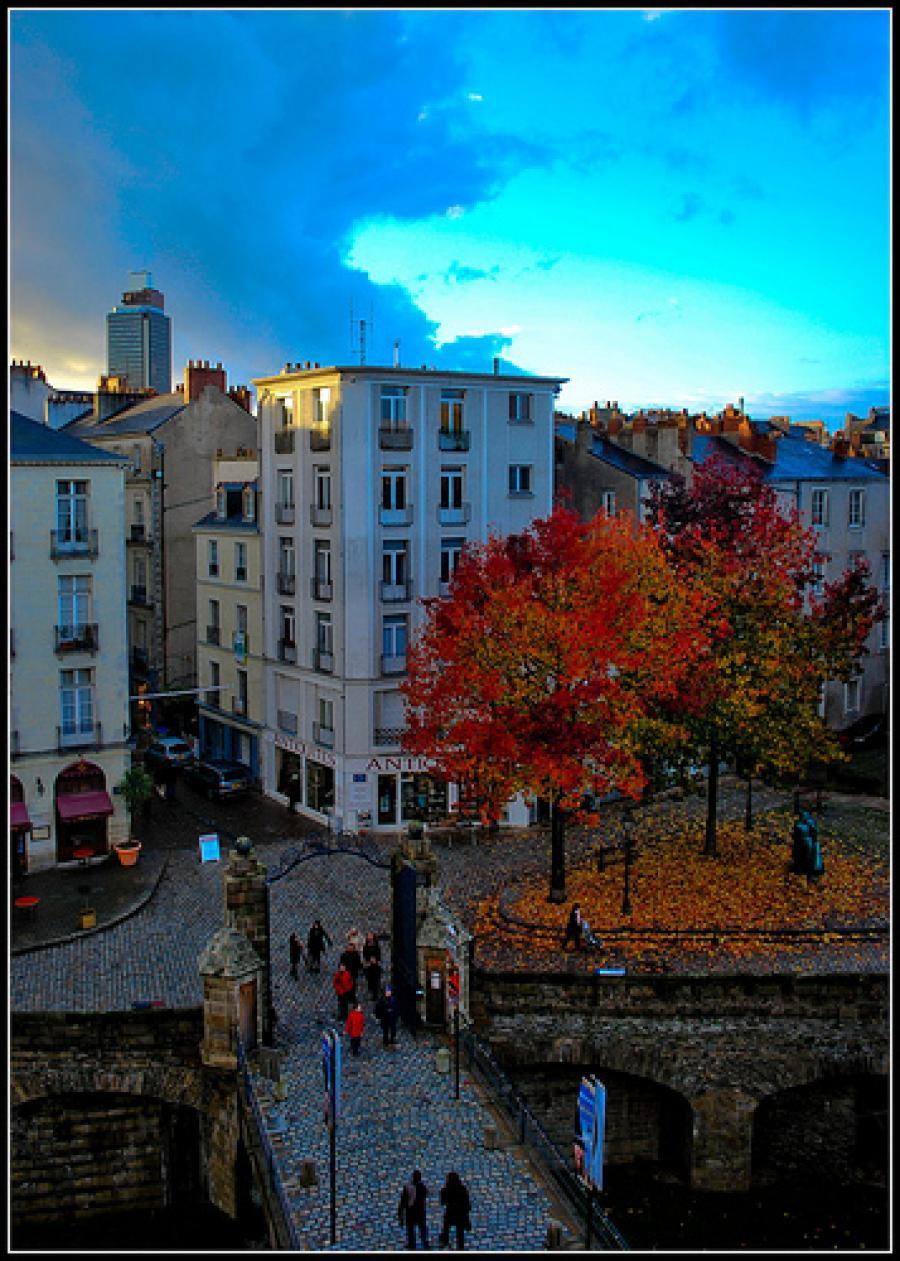 This article was written by Richard O'Brien, published on 15th September 2011 and has been read 13467 times.

Mole Diaries Nantes Oxford Uni
Richard O'Brien is studying English and French at Brasenose College, Oxford. He spent his year abroad as a British Council language assistant in two secondary schools in Nantes, France, enjoying the vibrant culture of a moderately-sized metropolis with its very own mechanical elephant. Here's what he made of it all.
When I came to choose my top 3 regions for my placement as a language assistant, I was clueless about France as a country, despite having studied its language for nine years. I didn't know my Lyon from my Lille, my Reims from my Rennes, Mont Blanc from Raymond Blanc (attempting to grapple your way to the top of the wrong one is generally considered a cultural faux-pas).

So if you're as ill-informed as I was, some facts: Nantes is the sixth-biggest city in France, about an hour from the West Coast, and the capital of the Pays de la Loire region. In the medieval period it was considered part of Brittany, of which Rennes is now the official regional centre. This is not a debate you will ever want to get involved in. But a thriving music and theatre scene, a great multicultural mix of bars and restaurants, and a rapidly redeveloping cityscape are just three things you might want to get involved in instead. And if you've ever felt like dancing in a converted biscuit factory until 3AM, Nantes is probably the place for you.

Nantes Atlantique airport, within easy and cheap reach of the town, is excellent for hopping back to the UK and serves many destinations further afield; though for the best deals it's often better to fly from Paris Charles de Gaulle. Luckily, you can get there by train in around two hours.

As a regional hub, Nantes is well-served by the TGV train network. Buying a 12-25 SNCF discount card, for around €50, was probably one of the smartest moves I made all year. Local bus services, run by Lila, will take you to the quainter small towns for a pittance; Chateaubriand and the walled historical town of La Baule are among the best on offer.

The centre of Nantes is small enough to walk to most places you'll need to go, but it has a regular and distinctive tram network. Run by TAN, a monthly pass for the under 26 is about €30. All 3 main lines join up at Commerce, making it a handy meeting point – as long as you specify which side you're planning to be on. The only drawback is their ridiculously early midnight shut-down, making for some interesting – but generally safe – late-night walks.

A bike hire scheme, the charmingly-named Bicloo, has a number of stations around the city; but perhaps best of all, the brightly-painted fishing village of Trentemoult is accessible by a little boat, the Navibus, which costs no more than a single tram ticket.

I stayed in a 'foyer de jeunes travailleurs' run by the Adelis network. Despite its YMCA connotations, these long-term youth residences are not necessarily the best place to get yourself clean, have a good meal, or hang out with all the boys. Some are friendlier than others, and mine organised some great free music lessons, but they're not all in great nick and you may not have your own kitchen or toilet. Generally speaking a better way to meet genuine French people who you might want to talk to is to look for a roommate on sites like leboncoin.fr or appartager.fr – or get in early to check the notices at the university (Facultés, on the Line 2 tram). While there, check out the lecture lists – it's easy enough to simply wander into any class that interests you. Whatever you do, make sure you get the CAF, or APL – it's a housing benefit that takes a while to come through, but will pay off the majority of your monthly rent – a bizarrely generous quirk of the French bureaucracy.

Nantes has an array of food options, from McDo, Subway and Quick, through to the delicious indulgence of the Boulangerie d'Antan, right up to La Cigale, a beautifully-decorated art nouveau steakhouse. As a vegetarian, I never had trouble eating out, though street sandwich stalls can be a nightmare if you want anything other than a slab of goats' cheese wedged into a cheap baguette and named something like 'Le Fromagier'. These are my five recommendations for la nourriture nantaise, in no particular order:

1. Le Shalimar, on Rue Jean-Jacques Rousseau – a shabby-opulent Indian restaurant with cheap set menus and a decent selection of meat and vegetarian dishes.
2. Le Petit Flore, near the Place Royale – upmarket but reasonable, this is the place to go for an eclectic choice of global cuisine. Chic décor and rustic wooden tables help create a sense of understated class.
3. La Cantine du Curé, on Rue Sainte-Croix – Bouffay, the town's atmospheric old quarter, is stuffed to bursting with creperies, offering crêpe and savoury galettes that are pretty stuffed with goodies themselves. La Cantine du Curé, among others, gives the choice to pick and mix what you want rolled up in their delicious buckwheat flour pancakes – best enjoyed with a teacup of crisp Breton cider.
4. La Reine Margot, on Rue Juiverie – expensive but worth it, this central eatery provides traditional French fare in traditional French surroundings. Served by French people, speaking French.
5. Carrefour supermarket. Seriously. At home, food shopping is a boring chore – abroad, it's like Charlie and the Chocolate Factory, a dizzying carousel of culinary possibilities. Week after week I found myself adrift on a sea of unfamiliar biscuits and cheeses, navigating my unwieldly chariot through an odyssey of confusing choices and branding gambits. Do I want a Petit Beurre, or a Petit Écolier? Is Poliakoff vodka really better because it comes in a bottle with a furry wolf sleeve? Rilettes – what are they for?

Nantes is a great place to go out at night, though the ridiculously low price of wine and beer in any supermarket makes starting at home a highly attractive and recommended option. As an assistant, I worked no more than eight hours in the average week, meaning I became quite familiar with the city's bars. Five places to spend that unjustifiably high salary:

1. Au Chien Stupide, Rue de Strasbourg – boasting colourful murals and live DJ-ing from shy but formidably well-informed barmen, Au Chien Stupide illustrates what would happen if the characters from High Fidelity opened a drinking establishment in the west of France. Not the cheapest, but certainly among the coolest.
2. Au Vestiaire, near Commerce Line 1 – loud music, a sticky floor, and €3 pints of Kronenbourg, at Au Vestiaire you get what you pay for. I spent more nights than I'd care to remember sitting around its incongruous barrels – and by 'care', I mean, 'am able to'.
3. Lieu Unique – with its unmissable and colourful cupola, this is a perfect example of Nantes' ongoing regeneration. Previously a factory for LU biscuits, the one remaining tower now presides over a hip bar and multi-arts centre, with industrial exposed lighting and music at weekends until 3am. Within easy reach of Le Remorqueur, the ultimate late-night bar-on-a-boat; but believe me, you don't want to go there.
4. La Maison, near the Cathedral – La Maison lives up to its name, with five or so separate sections each designed to replicate the rooms of a house; in this case, a gleefully tacky 1970s one. Celebrate with drinks on the cooker, or in the bath; a helpful two-sided menu offers flavoured shooters, and flips over to reveal a range of gourmet sausages, including wild boar. Only in France.
5. Le Violin Dingue, Rue Marechal Joffre – the 'Crazy Violin' lives up to its name, with a selection of overwrought puns for fruit juice including 'Framboise Hardy'. Artsy pictures and live indie music make this one of the best places to observe, and perhaps even try to integrate with, Nantes's hipster student crowd.


Things to See and Do

Though not necessarily the ideal tourist destination, Nantes has plenty to keep the long-term resident amused. MARVEL at the sculpted effigies of François II of Brittany and his wife in the frequently-burnt cathedral! RELAX in the purportedly 'English' design of the large and duck-filled Parc de Procé! GET DRUNK at the exciting, if somewhat remote, Hangar à Bananes, a converted warehouse complex full of shiny and varied bars and clubs, with a great late-night view of the river lit up by a series of multi-coloured rings that make the whole thing look a bit like a nobly-failed Olympics bid!

There are a number of museums, from the small and tedious Jules Verne exhibit (if you remember one thing from this Mole Diary, make it this – don't do that) to the taxidermist's fantasy that is the Dobrée Museum of Natural History. The biggest, and probably best, is inside the Château des Ducs de Bretagne; the castle itself is far more impressive from the outside, though its courtyard and battlements are free to visit, but it takes a solid 2 to 3 hours to do the various galleries of rich and varied regional history justice.

And whatever you do, don't miss the Machines de L'Ile – cooked up by the splendidly-named Pierre Oréfice, ingenious engineering meets theatrical spectacle in the form of a gallery of moveable monsters, based on the designs of Nantes native Jules Verne. You can climb inside a giant angler fish and spray strangers with water, or ride in ponderous majesty along the shore of the redeveloping island on the back of a huge mechanical elephant, with a fully articulated and extremely loud trunk. The whole project has a wonderful, delirious air of 'why the hell not?', and exemplifies everything there is to love about this fun, creative, and modern city.

If you want to find out more about Nantes, and the life of a language assistant more generally, check out Richard’s blog is an extensive and hopefully entertaining record of his experience.

by Mair Roberts
Living and working in France