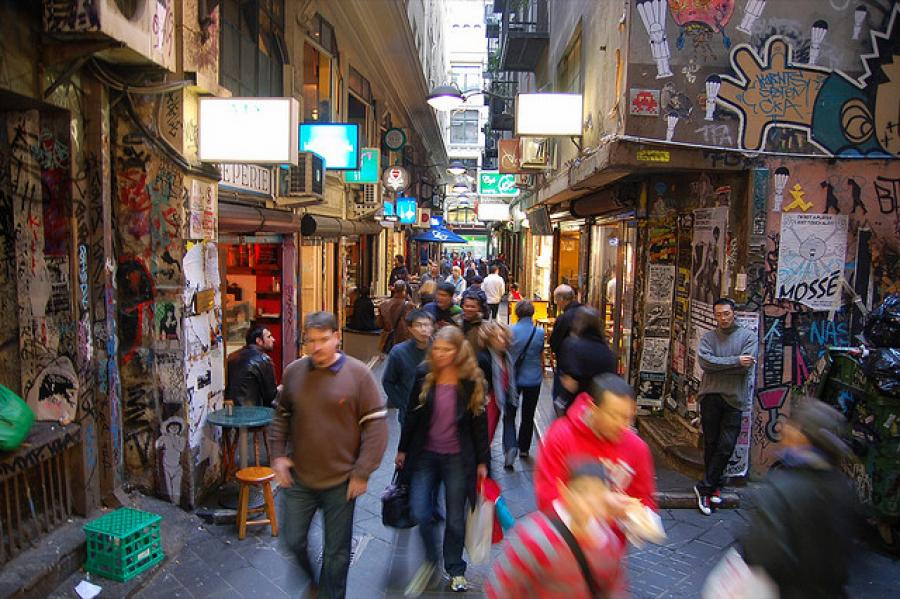 This article was written by Global Graduates, published on 24th September 2013 and has been read 6645 times.

Shara is studying International Relations with History at Nottingham Trent University, and is spending five months at Monash University in Melbourne, Australia. She chose this destination "because it has always been a country I wanted to visit and this seemed like the perfect opportunity." Here are her top survival tips for living and studying in Melbourne...

Make sure all of your paperwork is done and take a few copies of important documents. Remember to inform student finance that your going away, you don’t want to experience any delays in receiving your loan! Also it is a good idea to open a bank account, particularly if you’re there for a year. I didn’t set one up but it is easy to do and it saves on paying fees to your bank back home. Commonwealth Bank is a popular option with international students and you can set it up while you&39;re still at home. Also make sure your phone is unlocked! Check out Optus or Vodafone for good SIM only contracts.

Melbourne is famous for having 4 seasons in one day, whilst this is a slight exaggeration make sure you have packed an umbrella! That being said you will need, jumpers, jackets and scarfs for a Melbourne ‘winter’ particularly if you have experienced an Australian summer beforehand! You will acclimatise and suddenly 20 degrees will feel cold, even to us Brits!

It may be a good idea to stock up on clothes as well, particularly cheap light clothes for the summer months, they don’t have Primark or H&M (yet) so it’s hard to find good cheap basics. Also girls, make sure you take a good supply of makeup, perfume etc., these items are very expensive in Australia.

Dependent on your arrival time you may also be able to find an International Students Welcome desk in arrivals, go and collect a bag from them, they contain lots of useful things to get you in the know about Melbourne! Taxis to the CBD (Central Business District) from the airport will cost around $50 and will take around 25 minutes dependent on traffic. The SkyBus is another cheaper alternative and costs $17 one-way and takes you into the heart of the CBD to Southern Cross Station. From here it is easy to catch a tram, train or taxi to your destination.

To use any public transport in Melbourne you will need a myki card, which you can purchase from stations, 7-Eleven stores, and other selected retailers. You should make this your first purchase in Melbourne, it works on a pay-as-you-go basis and it calculates the best fares possible. Certain students will be eligible for a concession myki card, which will make the fares much cheaper. There is no other option to pay for transport in Melbourne so make sure you always carry your myki and remember touch on and touch off, they do check! PTV (Public Transport Victoria) also has an app.

If you have the option to stay in University residential halls I would definitely recommend it, however if like me your campus is far out of the city you may want to factor in how important it is for you to be closer by. People I know who were on exchange who didn’t live in university accommodation waited till they arrived in Melbourne and then met people in the same situation and found places to live. Obviously this is riskier as you may end up spending a few weeks in a hostel while you search for the right place but it can be cheaper.

Top Five things to do in Melbourne

Melbourne truly is a unique and exciting city, its no surprise it ranks so highly in both student satisfaction but also surveys such as ‘Most livable.’

My favourites are Fitzroy, Glenferrie, and Richmond. Melbourne is famous for its café culture and alternative fashion so make sure you go to places like Bridge Road and Brunswick Street.

The AFL (Australian Football League) season runs from March – September and it’s a definite right of passage to go to a game at the MCG and join the thousands of very passionate supporters.

Ok by Australian standards the beaches in Melbourne are not spectacular but they are still pretty good and the weather will make up for it (hopefully!)

The Corner Hotel is great venue for live music in Richmond and also has a great rooftop bar.

5. Take a road trip along the Great Ocean Road!

Ok for this one you actually have to leave Melbourne but it is a great trip to take with a group of friends and you can visit all the spectacular surf beaches and see the famous twelve apostles. If you can try and do this one in the warmer months so you can enjoy the beaches not just the views.

Look out for events that are happening in the city. In my first week in Melbourne the city hosted ‘White Night’ and it will be hosting it again in February 2014 and 2015. 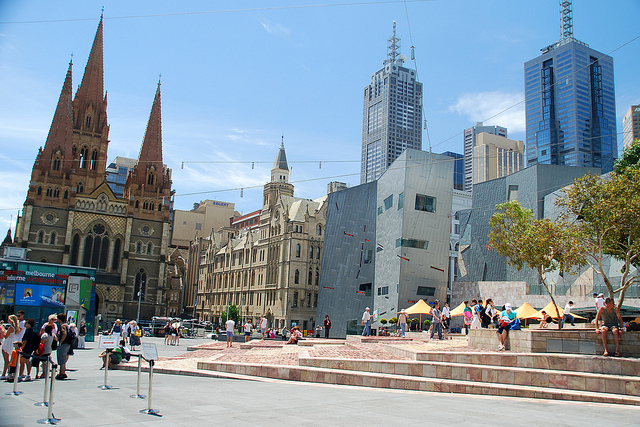 Melbourne is a foodies paradise, you can find everything and its usually done to a very high standard. Certain neighborhoods or streets will be dedicated to different cuisines, so if you love Italian food head to Lygon Street in Carlton. It is no surprise that drinks are very expensive in Melbourne. So make sure you take advantage of happy hours, another option is eating at a BYOB restaurant before a night out, this is a popular choice among students. For places to go out, the most popular destinations tend to be Brunswick Street and Chapel Street where you will find a mix of bars and clubs.

Top Tip: Head to Bimbo’s Deluxe on Brunswick Street or its sister Lucky Coq on Chapel Street for $4 pizzas and on the weekend a great bar for a night out.

Whilst you’re in Australia chances are you will want to travel as much as possible, as its such a large country the best way to travel is by plane. Lost cost airlines such as Tiger and Jet Star offer great deals particularly if you book them in advance. Trips to Sydney make for a perfect long weekend.

If you fancy venturing outside of Australia, then Tasmania, New Zealand and even places like Fiji are popular choices. Then of course there is always the option to break up the long flight back to England by stopping over somewhere in Asia, the most popular choice being Thailand of course!

Out of the way but…

Head to Healsville sanctuary, particularly if you’re only staying in Victoria it might be your only chance to see the Australian animals! Philip Island is another great trip whilst you’re in Melbourne. It is just under a 2 hour drive from the CBD and you can spend the day on the island and then stay to see the penguin parade a night!

1. ‘How you going?’ In Australia, they use this instead of ‘How are you?’ it means the same thing, not the transport you’re using to get somewhere.

2. ‘She’ll be right’ Pretty self explanatory, expect to hear it often, and then start using it.

4. ‘Arvo‘ Expect everything to be shortened ‘arvo’ instead of afternoon, another good one to know is Maccas, which is McDonalds, I’m still using this one much to the annoyance of my friends in England.

Although there are no worries about language barriers and no shocking cultural differences studying abroad in Australia can be very daunting as it’s so isolated. On the flight over I was nervous that if things didn’t work out I would have to endure over a day of travelling just to get home! That being said I couldn’t stress enough that you should and will enjoy every minute of your time in Melbourne. My five months went incredibly quickly and when it got to my final few weeks I was really not ready to leave and wished I could’ve extended my stay to a year.