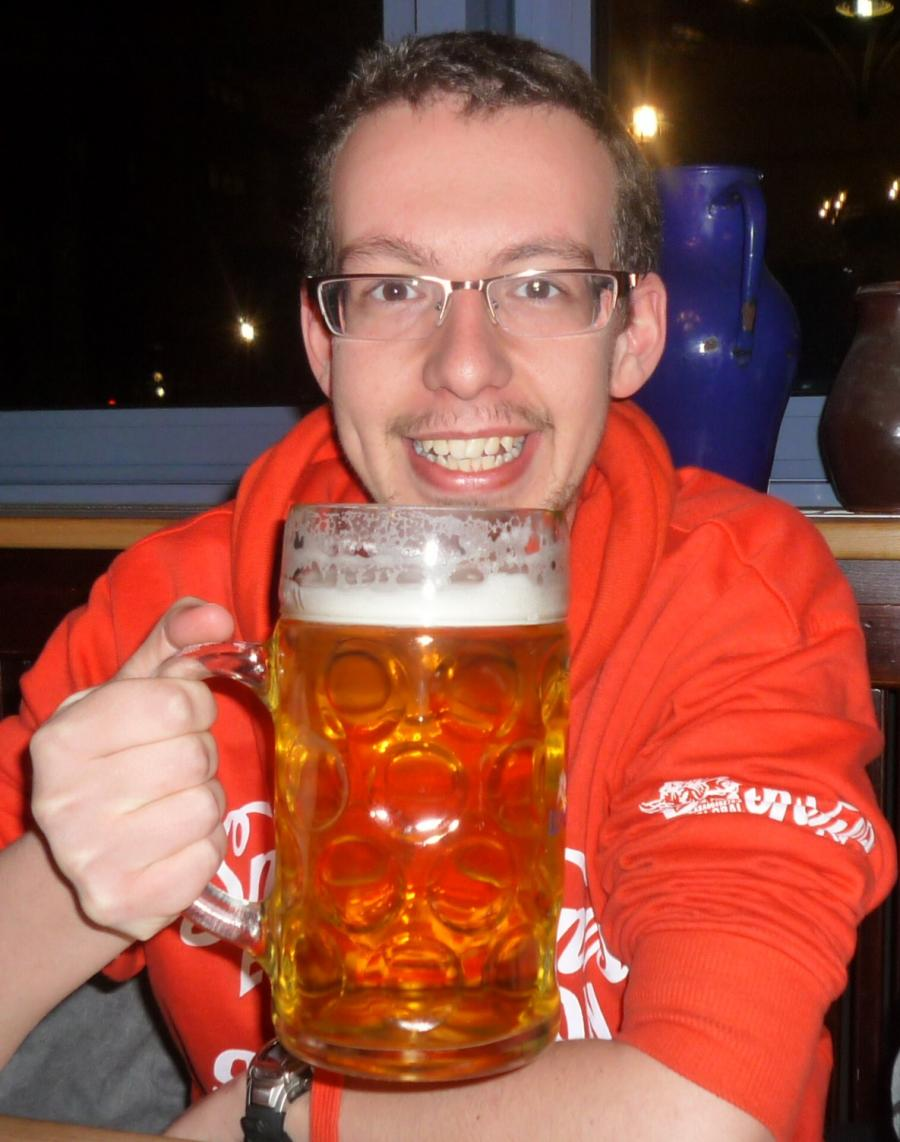 by me with a Maß

This article was written by Liam Evans, published on 14th December 2011 and has been read 5615 times.

Mole Diaries Mainz Bangor Uni
Liam Evans is at Bangor University studying LLB Law with German, and is currently on an Erasmus exchange at Johannes Gutenburg Universitaet in Mainz, Germany, where he is studying Law. Here he passes on his top tips for living and studying in Mainz.

Right, so about my accommodation. I’m one of the few exchange students lucky enough not to live in student halls. I’m in what the Germans like to call a WG. Basically this means that I’m sharing an apartment with two German lads, who are both great! Settling in was a bit difficult, not knowing them and having to talk German all the time, but once you get past that, it’s plain sailing really. The best thing about living with actual Germans is that you’ll feel your confidence go up in no time, and they always have great tips to give about Mainz and what to do here! It did seem quite easy to apply to halls, and I had considered doing this, and from what I’ve seen of halls so far, they seem thoroughly acceptable.

The University itself is quite large; larger than what I am used to anyway. It was a shock at first, but most of the staff that you meet are quite happy to help. My Erasmus coordinator in the Law department saved me a lot of time and effort, and all I had to do was go and ask for some clarification. Module choices are really easy as well, just simply choose any module from any department and as long as there is enough space and numbers, you’ll be on your way studying in no time at all! A small note on organisation here at the Uni as well: they are very organised indeed. When you first arrive you are treated to an Infodays programme, where you learn pretty much everything you need to know about being an Erasmus student in Mainz. Finances can be sorted out, paperwork can be done, and most of all it’s a great way to make some new friends, as everyone is in the same boat!

Mainz is a great city to be a part of even if a large part of it was destroyed during WW2. Some of the only parts that remained were the Cathedral and the Old Town. The first thing I learned to do when going into the city centre… always carry a map! Even if you’re on a night out, and you think that you know the way, believe the first couple of times, you’ll be glad of that Karte! After having got lost several times, and almost ending up where I started, picking up a map can be a huge difference. Mainz is situated on the Rhein, so one of the first things I suggest would be to get yourself down to the riverside and have a look over the water. When the sun is shining it really is spectacular. There are loads of great cafés and pubs for you to frequent as well, but I’d personally recommend Eisgrub Brau. For those who like a casual drink with friends or for those who are looking for a good atmosphere in a traditional German brewery, get yourself down there as soon as you arrive. The best thing about it… they serve 3 or 5 litre towers of beer and at a reasonable price as well. Now I've found this out, it has quickly become my favourite pub!

It would be rude to write this and not mention the fantastic Erasmus team they have working at the Uni here. So far they have organised some excellent trips - Berlin and Nuremburg to name just two - with plenty more coming in the new year! Not only do they put these trips together (and at great prices) but every Monday they host a Stammtisch evening at Quartier Mayence. This is where Erasmus students go for a social drink and a chance to chat to other people from around the world, people you thought you’d never probably meet! The atmosphere is quite relaxed, and it’s a great opportunity to speak and practise your German in a friendly atmosphere!

The best tip that I can give you would be this: travel as much as possible. Being pretty much in the centre of Europe, you have a great chance to fly pretty much anywhere, and when you are only twenty minutes away from Frankfurt International and there are direct transport links to Frankfurt Hahn. Don't waste this unique opportunity! Frankfurt Hahn offers many cheap flights to countries in Europe and, with that in mind, I’m definitely going to be doing as much travelling as I can! Partake in as many trips as you can or want to, but travelling is definitely important for having fun on your year abroad!