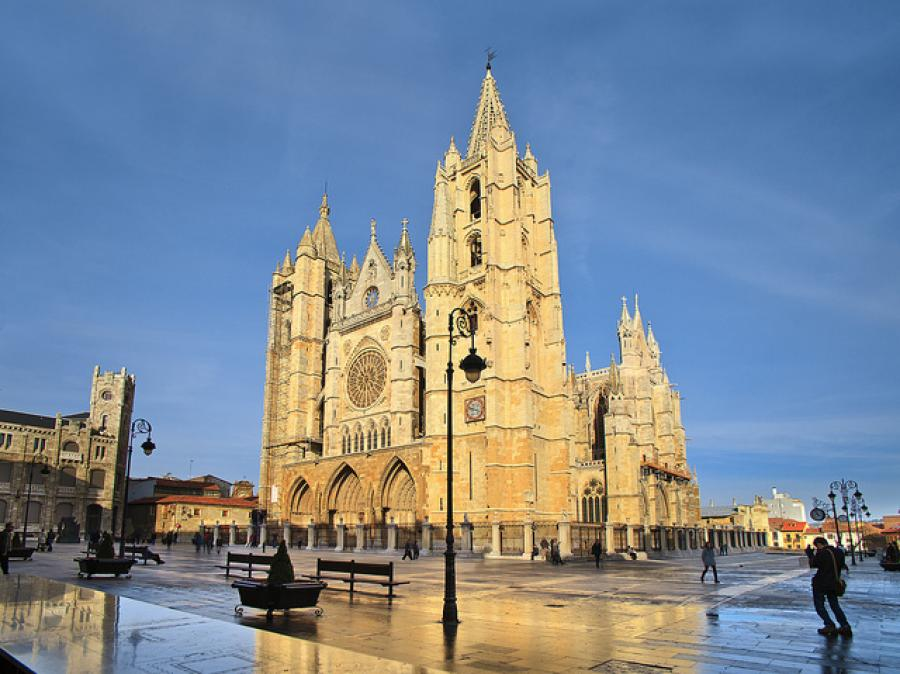 This article was written by Sophie Rhodes, published on 3rd July 2013 and has been read 3821 times.

Mole Diaries León
Sophie Rhodes is a student at the University of Exeter and is currently studying abroad at the University of León in Northern Spain. Here is her insider guide to León: where to live, how to get there, banking, things to do, food and drink, and teaching English in León.

When planning my year abroad in Spain, I was more inclined to head towards somewhere I had never been, and somewhere where I could live in a more traditional city where I would have greater opportunities to practice and speak spanish. As a result, at the end of last summer I found myself heading to León in Northern Spain. I had no expectations of the city, due to the fact I knew next to nothing about it, and had never even visited the region of Castilla y León before!

León is located on the famous Camino de Santiago in northern Spain. The decadent gothic cathedral is at the heart of the Old Town, and is a tourist hotspot for pilgrims on the camino throughout the year. Whilst it is a relatively small city, there are loads of students, both spanish and international, so you will definitely have the opportunity to meet people from all over.

León is the capital of the Spanish province of León, one of the more geographically and climatically diverse regions. The mediterranean summers are cooler than the southern cities, and snowfalls are not uncommon during the winter. Cities such as Gijon with it's beaches on the Bay of Biscay are a bus ride away in the summer, whilst in the winter day ski trips are possible due to the city's proximity to the Picos de Europa mountain range, making this location in Spain a desirable place to spend a year abroad.

Finding somewhere to live was definitely my biggest worry, as having spent two years at university in England where accommodation is sorted long in advance of arrival, the idea of turning up to an unknown city with no fixed address was definitely a daunting prospect! But, in fact, it was by far the easiest thing to do. Check yourself into a hostel for a few nights and when you arrive look at your university's website, as frequently they will have details of local landlords. I was lucky enough to be heading out to León with a friend from my university, so we spent the first few days ringing around looking for somewhere to live and exploring the city. The place I ended up in I found simply by seeing an advertisement on a building whilst walking through the student area.

The most important thing is not to panic! León is a small city, and everyone I met found somewhere relatively easily. Ask around where the best places are to live – for students this is probably the Palomera or San Mames area, as this is where the majority of students live and is half way between the university and city centre – and if you book into a hostel you will probably meet other Erasmus students doing a similar thing.

León is a fairly isolated area of Spain, so you may find it difficult to get their easily. The best way to get out there is to fly to Madrid and get an ALSA bus to León, which takes around 4 and a half hours and is €24.90. If you can get a flight to Valladolid you can also get a bus to León which is only around 2 hours - however the airport is much smaller, and has limited flights, especially out of season.

Opening a spanish bank account is not always necessary and is definitely a bit of a hassle! I went for using a prepaid Caxton Card, which meant I could load money onto the card online and could withdraw money and pay in shops without being charged. However, if you end up in accommodation where bills aren't included in the price and you have to pay them separately rather than via your landlord, it may be necessary to open a bank account to organise direct debits. If possible, I suggest you avoid going for this sort of accommodation, as it will save you time and energy if you don't have to face sorting out a spanish bank account!

1. León Cathedral is a beautiful gothic Cathedral, famous for being one of the landmarks on the Camino de Santiago and attracts tourists throughout the year.

2. MUSAC (Museo del Arte Contemporáneo de Castilla y León) is a contemporary art museum in León, inaugurated in 2005. It is known to be one of the most celebrated museums in Spain, exhibiting collections from 1992 to 2012.

3. San Marcos Parador is a converted renaissance convent which is now a luxurious hotel and is well known as one of the architectural monuments of León. Well worth a visit.

4. Barrio Húmedo is located in the old part of the city and is known for its large number of bars and clubs. This part of the city comes to life at night and is the perfect place to spend your evening.

The relative quiet and tranquility of León changes drastically in the evenings, as everyone heads to the Barrio Húmedo and surrounding areas for tapas. The tapas culture in León is great; for around €1.20 you can get a small glass of beer or wine with tapas, which ranges from the typical morcilla (black pudding), to croquetas, patatas, bread with iberian ham and cheese, and much more. There are loads of places in the centre of town to go to, and to make the most out of a tapas evening we normally go between a few having something different to eat in each. A few favourites are Taberna Oriente Medio (Calle Juan de Arfe), where you can get a nice glass of wine for around €2, which comes with pieces of chorizo which are set on fire in front of you. El Llar is right in the centre of the Barrio Húmedo, where you get patatas with different sauces and a drink. If you fancy something a bit more substantial, head upstairs here and there is a restaurant overlooking the plaza where there is a great selection of different tapas dishes.

If you are after something a bit more substantial, perhaps try one of the following:

El Rincón del Búho is a cafe is tucked away in the old city off the main street (Calle Ancha) and it is definitely one of my favourites. From 15:00 onwards, you can enjoy a wide range of coffee, teas, cocktails and more. The high wooden beams and mismatched chairs add to the boutique feel of the cafe, making it the perfect place to relax over a coffee, or start the night with a cocktail. El Rincón del Búho also offers a dinner menu, which is a mixture of salads, jamón, the typical Leonese dish of morcilla, and more.

If you are wanting some home comforts, why not try the Chelsea Bar located just a few minutes walk from the main Barrio Húmedo. Known as the “English Bar”, Chelsea Bar has created an english-pub atmosphere. Similarly, try Cafe Charlotte for another taste of home, with a large selection of coffees, teas, ice creams and sweet treats (the waffles are definitely a personal favourite!), as well as more substantial pastas and wraps. The comfortable sofas, relaxed atmosphere and free wifi make this the perfect place to meet friends or do some work! Make sure to also try one of the freshly made fruit smoothies!

This English-style cafe situated opposite the cathedral on the Plaza Regla is a great place to get a coffee and a treat. Enjoy a slice of cake or a pastry (sometimes they even offer scones!) and sit out in the sun in the atmospheric Plaza Regla.

León is a relatively cheap place to live, but teaching english is a great way to earn some extra money. There are advertisements for english teachers all over the city, especially at the university, and you can expect to receive around €10 to €15 for an hour's teaching.