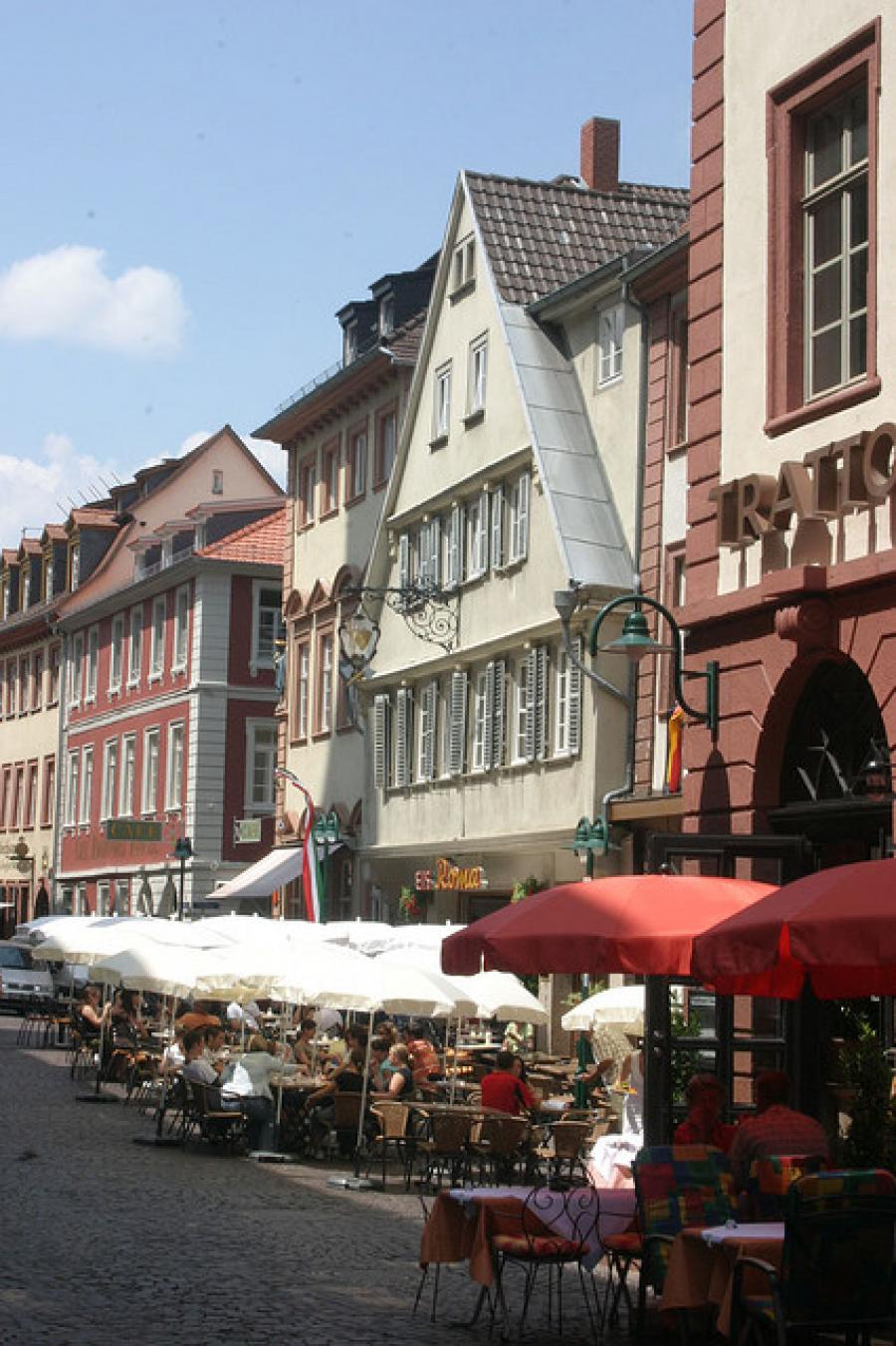 This article was written by Jordaine Hulse, published on 21st May 2012 and has been read 5258 times.

Heidelberg Mole Diaries Bangor Uni
Hallo! I’m Jordaine Hulse, a Bangor University student of French, German and Spanish. At the moment I am on the second half of my year abroad placement in Heidelberg, Germany. I chose to study at Heidelberg as it was going to be my first ever visit to Germany and I did a great deal of research on the possible university placements that we were given before I made my choice, I decided that I really wanted to discover Heidelberg as the university had such a great reputation (which can only do wonders for your CV right?) and of course who could ignore the beautiful location!

Heidelberg is an extremely picturesque city with so many different areas to explore and exquisite buildings that will make you fall in love with the place instantly! The city has been built on the River Neckar, which runs through Heidelberg and creates a fabulous scenic view. You will never find yourself at a loss of things to do in Heidelberg, as it provides plenty of activities and entertainment to satisfy your needs for example there are swimming pools, cinemas, a zoo and even a student prison...read on to find out what else there is to offer in Heidelberg!

Things to do & places to go

1. Heidelberger Schloss
The castle which overlooks all of Heidelberg. This is possibly one of the most visited attractions in Heidelberg - even Mark Twain wrote about it! And with good reason too, the castle is an important historical landmark with a reasonable entrance fee of just €2 for students. The view of Heidelberg is not bad either! (Top Tip! Purchase an audio tour for €4 which tells you all the information you need to know about the castle. You can use the audio handsets all day so you can explore at your own leisure.)

2. Altstadt
The ‘old town’ of Heidelberg presents plenty to do and see. There are lots of quaint shops and restaurants in this area, as well as the main part of the university campus being situated there. As this is the core of the city you are likely to spend quite a lot of time here! (Top Tip! The Marstall Mensa is one of the cheapest places for a student to eat, it is also one of the nicest student cafeterias in Heidelberg.)

3. Hauptstraße
Running through the Altstadt is the mile long main street where you can go shopping, buy souvenirs, watch a film, grab a bite to eat or simply have a drink in a pub and watch the world go by!

4. Alte Brucke
The Old Bridge over the River Neckar which was built in the 18th Century. This is another popular tourist attraction in Heidelberg which you can take a lovely walk across and take in the beauty of the river. There is also a medieval gate on the bridge and a brass monkey (a photograph with the monkey is a must!) In recent years, couples have taken to engraving their initials on padlocks and attaching them to the bridge as a show of their love – so have a look out for them when you are there!

5. Neckarwiese
The Neckarwiese is a grassy communal area which runs alongside the River Neckar. On sunny days many people flock to the Neckarwiese to sunbathe, have barbeques and picnics and play games. Many people go there with their families and friends as a place to socialise and spend time together outdoors and to just relax in general. However this is also the perfect place to take a romantic stroll, enjoy a nice bike ride or you could join the masses with a daily jog. You can also hire rowing boats or pedal boats if you are bored of just sitting alongside the river and would prefer to be on it – but watch out for the bigger barges which go past frequently and have right of way!

6. Philosophenweg
Philosophers’ way is a path along Heiligenberg which has a great vantage point and is said to have been visited by many famous philosphers. The walk up is not for the faint hearted but once there you are rewarded with breath-taking views of the Altstadt and Heidelberger Schloss.

7. Thingstätte
This is an old Nazi Amphitheatre which is situated further up Heiligenberg. The amphitheatre seats around eight thousand people and it is practically impossible not to feel a sense of awe. When you are there you can almost imagine the things that used to take place. Although every year on the 30th April thousands of people gather in the amphitheatre to celebrate the spring festival of Walpurgis Night. This festival is to mark the arrival of spring and there is plenty of dancing, drinking and general merriment with a few bonfires and fire breathers thrown in for good measure!

8. Königstuhl
Otherwise known as the “King’s Throne” in English. It is the highest point in the city with panoramic sights across Heidelberg and the Black Forest.

There are two main forms of transport in Heidelberg for students...

Buses: As the main form of transport throughout Heidelberg, the buses are a well run system in the city. On week days they run every ten minutes throughout the day and at the weekends they are every half an hour – so you can be sure that you will never be waiting too long! Semester tickets are available to buy for students at €138 however if you don’t want to purchase a semester ticket then you can still catch the bus for free after 7pm. Bikes: This form of transport is probably the cheapest (besides walking) with only the initial cost of the bike to think about. Another great thing is that you can sell your bike when you want to leave. Cyclists in Germany practically have right of way on the roads and the pavements so be careful when you are walking around!

Make sure you are prepared for all types of weather! As I arrived in Heidelberg in the summer semester (March-August) I expected the weather to start hotting up as soon as possible. Although my expectations were soon dashed as I had to whip out my raincoat on the first day! Don’t let this put you off though, from then onwards the weather really started to heat up although thunderstorms are a regular occurrence in Heidelberg so it is best to keep your raincoat or an umbrella handy at all times! Don’t miss out on the Schlossbeleuchtung! On the first Saturday of June, second Saturday of July and first Saturday in September thousands of people gather to watch the castle being lit up, followed by fifteen minutes of fireworks! Not everyone queues... I think British people in general are very good at queuing, we enjoy being organised and orderly. However don’t be surprised if you find yourself queuing on your own whilst abroad! Insist on speaking German! It is very easy for people to hear your accent and want to speak English. Trust me people will not be offended if you say you would prefer to practice your German, you are in the country for a reason so you might as well make the most of it while you can...you can speak English at home!

I have found it very easy to settle in here in Heidelberg as everything is very student orientated and people are generally very friendly! Not only have I been able to practice my German but I also have Tandem Partners for French and Spanish too which are organised by the university. There is a lot of red tape in Germany but once you get used to how organised the system is, you can be fairly sure that things will fall into place quickly. The main thing is just to get out and experience Heidelberg while you can because the time you spend abroad absolutely flies by!

Can you do a year abroad as a non-linguist at Oxbridge?

Hi there. I'm a linguist at Oxford. I don't think I've ever heard of a non-linguist taking time out if their course for either a year or a term abroad. They encourage travelling during the holidays (...

I'm going to Spain for my year abroad; do I need a NIE?

A NIE is basically the foreigner's version of the Spaniard's ID card (DNI.)  If you intend to open a bank account then you must get one before doing so.  They use the NIE for most things, although i...