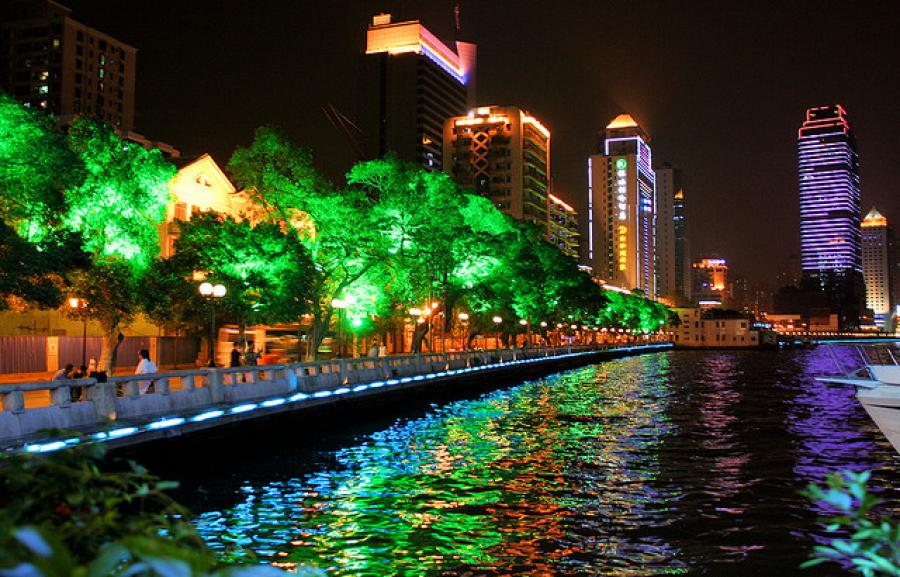 Guangzhou by night by micmac9a

This article was written by Pippa Smith, published on 24th October 2013 and has been read 7857 times.

China Chinese Mole Diaries Bath Uni Guangzhou
Pippa studied French and Italian at the University of Bath and spent her year abroad in Paris, Lyon and Siena (she's our Siena Mole!) She graduated this year and has gone on a post-uni gap year as a teaching assistant in Guangzhou, China. Here's her insider guide to living in the city: getting around town, sightseeing, food, weather, weekends, useful apps and shopping in Guangzhou...

Guangzhou, a large and vibrant city in China’s Pearl River Delta is the heart of Cantonese language, cuisine and culture. It is the capital city of China’s Guangdong Province one of the most rapidly developing regions of the world.

It is very easy to get around Guangzhou on public transport – there is a very efficient metro service with trains departing every couple of minutes and it’s really convenient for getting in and out of town. Be warned though, at peak times the metro can be extremely crowded and you can end up being packed on like a sardine, meters away from someone’s smelly armpit. If you can deal with that though it’s probably the cheapest way to travel with a single journey costing as little as 20 English pence. You can buy a Yang Cheng Tong card which works a little bit like an Oyster card and this can be topped up at any 7/11 store found in most stations. I would recommend to anyone who is going to be in Guangzhou for longer than a few days, to buy the Yang Cheng Tong as it means avoiding long queues and saves you a bit of money in the long run. The card can also be used on any other method of public transport around the city, including the buses. (You should really know your way around and understand some basic Chinese before you choose to use the buses though!)

Taxis are an equally popular mode of transport and they are relatively inexpensive. A 15 minute journey can cost as little as £1.50 so if you split that between a group of you it really doesn’t cost a lot at all and a taxi will take you directly from A-B. It can be quite frustrating when empty taxis drive past you and don’t pick you up: some drivers won’t take a job because you aren’t heading in the same direction as they want to and some don’t really know the roads that well but like with most things in China you just have to be patient. Also, unless you agree on a set price before you set off, remember to make sure the meter is running to avoid an argument at the end of the trip. Few taxi drivers speak or read English, so it is best to have your destination written in Chinese characters. Most restaurants and shops have cards written in both English and Chinese.

You will quickly learn to give basic directions and recite your address in Chinese!

Sightseeing and things to do

Guangzhou is often overlooked as a destination for tourists because most people head towards the bright lights of Shanghai and Beijing. It isn’t really a major tourist destination but it’s very close to Hong Kong and Macau and there are a lot of things to see and do in Guangzhou itself such as:

One of the most prominent landmarks of the city. Climb to the top to see Guangzhou from an entirely different perspective. (literally!)

Around 45 minutes from the centre on the metro is Chimelong – here there is a theme park with some pretty cool rides, a safari park, crocodile park, water park and an international circus. The circus is the longest running and largest permanent circus in the world and the acts are truly impressive giving you a night to remember. Entrance to the theme park is much cheaper than a visit to somewhere similar in the UK and a great day out.

At night time you can hop onto a boat which will take you down the river and back, pretty impressive with all the lights. A good idea for a romantic date perhaps!

4. The Tomb of the Nanyue King

This is the final resting place of Zhao Mo a member of the Han Dynasty, who ruled over the Nanyue State. An interesting place to visit to learn some history, you can go down into the tomb and around the museum

If you ever want to get away from the hustle and bustle of the city centre and go somewhere with a completely different vibe, head to Shamian Island – it’s still in the centre of Guangzhou but you cross a little bridge on to this island and you feel like you’ve been transported back a few years and across the globe all the way to France – the buildings here are very European and it’s just a generally chilled and nice place to be. You can buy traditional Chinese clothes and ornaments here too which are great for presents to take back home.

6. Statue of the Five Rams in Yuexiu Park

This park is a nice place to visit, it’s the largest park in Guangzhou and there is a large statue of the five rams which has become the emblem of the city (Legend has it that more than 2,000 years ago, the city was a barren land with people who despite hard work were suffering from famine. One day five immortals in five-color garments came riding on five rams, playing their legendary music. The rams held sheaves of rice in their mouths. The immortals left the sheaves of rice for the local people, gave blessings to the city and left. The rams turned into stone and the city became a rich and populous place. This is why Guangzhou is also sometimes called the City of Rams.

A famous spot of natural beauty in Guangzhou with a great view at the top. You can take cable cars to the top or walk many many steps. Lots to do here, interesting to see the locals practising Tai Chi in the mornings or playing badminton. You can even do a bungee jump!

The food in China varies greatly from region to region. Guangzhou food is probably the closest example of food you will get to the Chinese takeaway you would be used to in the UK. Honey roast pork, sweet and sour chicken, beef noodles etc. It’s very tasty!

Guangzhou is most famous for its Dim Sum which you must try if you come here. Dim sum refers to a style of Cantonese food prepared as small bite-sized or individual portions of food traditionally served in small steamer baskets or on small plates. Eating dim sum at a restaurant is usually known in Cantonese as going to “drink tea” (yum cha, 飲茶), as tea is typically served with dim sum.

There are some weird and wonderful local delicacies, some which I will personally never try (pig intestines… yuck!) and chicken feet. (FEET?!) Give it a go if you’re feeling adventurous though!

You can get Western food here too, the big fast food chains like Macdonalds, Burger King and KFC are all here. For a good Western meal you can always head to Fine Foods near Guangzhou East Railway station where they serve a good selection of dishes for decent prices. Lucy’s Place on Shamian Island is also a firm favourite for a cheese toastie or a good burger!

Guangzhou’s climate is subtropical. There are four distinct seasons, with some outlasting others. Fall and spring generally offer very pleasant temperatures, and the days are warm and breezy. Winter temperatures can fall to around 10°C in the winter months of December, January and February, which does not sound too cold but can feel a lot chillier. Summer is hot and humid with temperatures around 32-40°C, with a humidity of up to 90% – be prepared to sweat!

Travelling away from Guangzhou

Travelling around China is relatively inexpensive, and there are daily flights to well-known places (Beijing, Shanghai, Xi’an) as well as to lesser-known destinations such as the nearby beach resort of Hainan Island.

Guangzhou Baiyun International Airport is easily accessible by metro on Line 3, and by taxi. You can fly almost anywhere from here. Flights back to the UK are around 15 hours long and usually range from £500 to over £1000 depending on who you fly with and whether or not you fly direct.

Some popular Asian destinations are Vietnam, Thailand, Cambodia and the Philippines. These are all fairly close and easily reachable. To travel around Asia, some websites with good deals are:

If you are the proud owner of an iPhone/iPad, the following FREE apps are brilliant when first moving to Guangzhou:

Has addresses in English and in Chinese for a large variety of different restaurants, bars, and entertainment venues. For some of them it also provides the metro line, station and exit.

Brilliant English/Chinese dictionary which operates with pinyin or characters. It is very useful for day-to-day Chinese queries.

Great app that allows you to chat for free with other users that have it installed on their smart phones around the world. It is good to keep in touch with friends and family back home.

Free international calls over wifi, another great app for staying in touch with friend back home.

1. Aeon
These are all over Guangzhou – you can find a large Aeon store right by Guangzhou East Railway station. These are big supermarkets which are easy to navigate around and offer a decent range of import goods. There is not much you can’t get here.

2. Corner’s Deli
Located in Back Street, Citic Plaza, in the Tianhe area. There is a great selection of British and American products, however expect to pay above average (i.e. above what you would pay in the UK. E.g. Jar of marmite = 60 RMB, boxes of cereal 45-70 RMB). It is overpriced but worth it to have some home comforts from time to time!

3. IKEA
Take the metro on Line 3 to Linhexi or Guangzhou East station. You can buy anything for your home here for reasonable prices, and it also does home delivery for a small fee. Excellent to get your flat feeling more homey.

5. Beijing Lu
This busy pedestrian street is another popular spot for shopping. The stores sell everything from clothes and shoes to accessories, general merchandise, jewellery and even food.

That’s all for now folks, hopefully this is a useful insight to anyone thinking of moving to GZ!