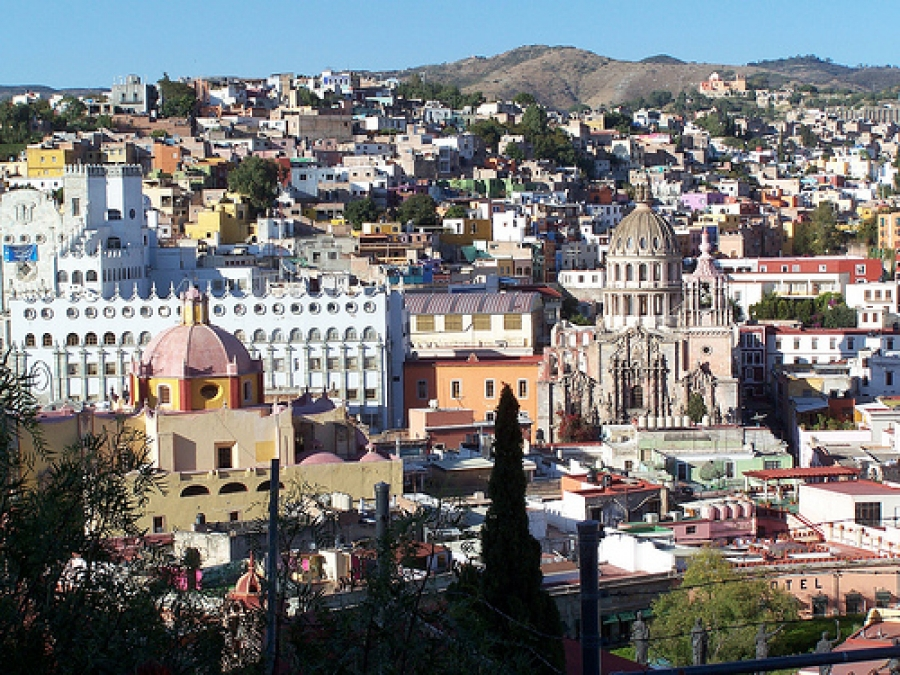 This article was written by Adam Sears, published on 14th November 2010 and has been read 26716 times.

Mexico Mole Diaries Newcastle Uni
Adam Sears, Spanish student from Newcastle University, gives us his views and opinions on one of Mexico's most photogenic cities, after having spent his year abroad there...
Guanajuato is such an amazing city, as it’s literally jammed packed with things to do, bars to sit in and students to meet. With such a large university, the city offers loads of things to do all year round for young people, and there’s a really relaxed vibe out here!

Finding your way round the city at first can seem a bit daunting. I was literally walking around in circles on my first couple of days, as all the coloured houses inevitably ended up looking the same. It is quite cool, though, as you end up by trial and error, knowing a lot more shortcuts than even some of the locals! It’s not really worth getting on a bus unless you can see a steep climb (there are quite a few!), but if you’re going round the centre, your best bet is to go by foot. The city lends itself perfectly to pedestrians, though there are quite a few twists and turns, due to the city’s layout. The tunnels underneath it are also worth knowing your way round, though be careful as quite a few cars seem to speed by, despite the narrowness of the underground road network. Most of the city’s activity takes place round the centre, you won’t need to go too far to find a nice café, a place to sit in or a few cool shops to spend a few hours in.

People here are generally quite laid back - it’s a student city, afterall. I found there was quite a hippy vibe to it too, especially seeing as the market sellers just seem to want to chat to you (in a nice way!) and the way people dress here also reflects a kind of happy-go-lucky vibe, compared to other cities. Another good thing to consider if you’re thinking of coming here is the amount of foreign people - it may seem like a hindrance at first, but it’s great as it means you can get the best of both worlds. For example, you can eat out and get really good Mexican antojitos, as well as European dishes; if you don’t fancy speaking in Spanish for the day, you can easily befriend one of the many exchange students. I really didn’t feel like much of an outsider here, compared to some of my other friends, who were in other Mexican cities and felt it was quite hard to integrate.

There are sooooo many good places to eat here! Truco 7 is great if you fancy Mexican with a mixture of more European treats, and it’s just behind the centre of town. Your best bet for Mexican food is going to the markets round here, especially the Mercado in the centre, as you’ll be able to taste all the local dishes. There are also little stands that pop up across the city, with antojitos (snacks) - expect to get ill perhaps your first time, but after that, you’ll be fine. Café Carcamanes gets a lot of students coming in, due to the cheap food and wifi access.

I really enjoyed my time out here, but I think by far and wide one of the best attractions of the city is the annual Cervantinofestival, which brings in loads of people in October - November, with foreign bands, different sorts of music and cultural activities. Shows are put on during the day, so you’ll always find something to do over the few weeks the festival is on. There are quite a few bars scattered around the city, and all are pretty easy to get to, as the city is so small. One of my absolute favourites was Bar Fly, because it attracts a decent crowd, mainly students, foreign and local. It also has some food, though I never tried any of it, preferring the music (some nights are dedicated to Reggae, others Electro, others Indie). Another favourite of mine was Why Not (great name!), which also plays quite a lot of Reggae, with a mixture of Latin tunes. It’s got quite a relaxed vibe to it, too, with pool tables and such like. Bar Ocho, which is right behind the Teatro Juárez, is also quite fun - they have a really pleasant terrace and a cool interior, if it gets a bit cold. Other than that, there are a few other bars and clubs which are also quite fun, and you’ll soon find that you end up bumping into the same friends, as the night scene is quite small, yet fun.