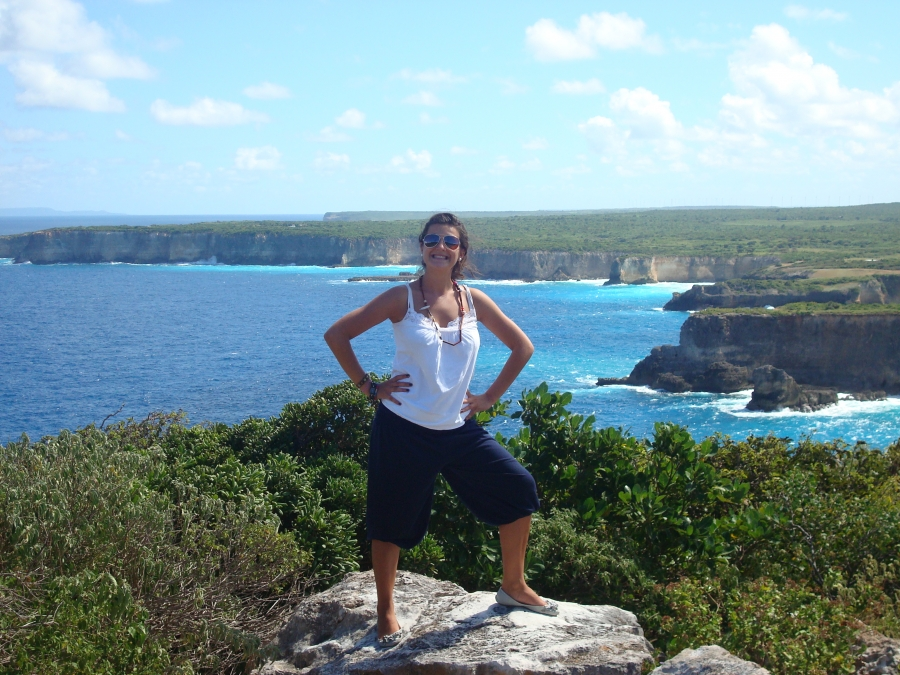 Madi in Guadeloupe by Madi Matei

Teach abroad Mole Diaries Guadeloupe
Madalina Matei chose to go to Guadeloupe for her year abroad. Here, she gives us an account of how teaching in the DOM-TOMs went...

I spent my first semester in Guadeloupe (Gwada for short), as an English teaching assistant. It exceeded any and all of my expectations concerning what I’d be doing on my year abroad (especially since I only found out I was going about 2 weeks before I left); living in the Caribbean and being part of such a vastly different culture, even if for a short while, was a truly unforgettable experience.

Speaking on behalf of all the other teaching assistants, we all got picked up from the airport by our tuteurs, the teachers in charge of us. For those who haven’t got their transport sorted out, there are taxis, which will cost around 20 euros to take you to Pointe-à-Pitre. Having said that, during my stay in Guadeloupe I never saw a single taxi as most people own a car, and most young people have a moped. For the first two weeks I lived in a flat with 2 Guadeloupean students in Pointe-à-Pitre, right next to a downtrodden neighbourhood (prostitution and drug abuse). I had the misfortune of venturing out alone on my second day there (a Sunday!) and found nobody out on the streets apart from a junkie who was rapidly advancing towards me, before a stranger out with his parents warned me and gave me a lift back home. Luckily, by the following week, I’d made some friends at the beach and one o fthem, who was returning to Métropole, offered me his room in a flat in Gosier, opposite the beach, for a mere €200pm. It took me about a month to properly settle in and finally differentiate between the créole and the Gwadada French accent, and to be a little less worried walking around alone.

Pas ni problème. In other words, the culture there is very laid back. On my first day of work, I turned up 20 minutes late because no bus ever came and the teacher I was working with just laughed and told me not to panic as this always happened when it rained. There are markets which open around 6PM in Gosier and Sainte-Anne (I’m sure, other larger towns too) on Thursdays and Fridays, and it’s always better to go there for cheaper fruit and veg but also to see, if not sample, the local food (try out the accras, boudin, crabe farci…Most restaurants offer creole platters so you can taste a bit of everything). The culture is very colourful and nobody ever wears dark clothes. I was in Gwada during the Route-du-Rhum, which takes place every 4 years, so for a whole month there were many music shows on, as well as a wide variety of rum to sample. My only issue there were the men, who will whistle/shout things at you but that’s generally as far as it will go and you eventually learn to block it out.

There are a few clubs, try out the Cheyenne in Gosier or go to the Marina (the bars here are more Métropole, and although Guadeloupeans do go there, the music is mostly mainstream, and not the local zouk or dancehall which is more traditional). Latino Café (also in Gosier) is a tiny tiny bar with a dancefloor, with music more representative of creole culture. People get extremely close when they dance - especially to zouk!!! - so beware if you’re a girl. There are also rave-parties on the island, which are kept hidden. The one we went to was in a field in the middle of nowhere, so try going with locals. Not a lot happens during the week; L’affirmatif is a restaurant in Gosier which has salsa nights every Tuesday, so that always draws in a crowd. Try the Ti-Punch, traditional rum served with lime and brown sugar, but be warned: it’s very potent!

Best investment: a car! Cars are a must if you have a driving licence, so you’ll be wise to rent one, and others will chip in for petrol costs as it’s the only real way to get around the island. Buses are next to non-existent, they don’t run after 6PM or on Sundays, and they will only take you to the bigger towns. Rent shouldn’t be too costly and your tuteur will most likely know someone who rents out rooms so you can say from the beginning how much you’re looking to pay and they’ll help you out. Food is not that much more expensive than it would be in France, though I remember tomatoes being quite pricey. Tap water is safe to drink. If you go out, a Ti-Punch is about 3 euros, though spirits and mixers in a club could cost up to 9 euros. Most of my money went on activities and trips to other islands; I wouldn’t worry about anything else.

Gwada’s geography is quite varied, so you can do a lot of different activities during your stay there. You can hike up the Soufrière volcano, hike and see the waterfalls, go surfing to the East of the island (Le Moule is the best place), go scubadiving on the West (the Jacques Cousteau reserve where you can touch his statue and have life-long scubadiving luck), go zipwiring in the rainforest and see the tempestuous waves in La Porte d’Enfer. You must visit Les Saintes, where the only way to get around is by foot or on mopeds for some amazing snorkelling, and the islands of Dominica and Saint Martin are not too far away, nor too expensive to visit so my genuine advice is to do it all because you may never get a chance to go back again! Also, even if you’re there for a year don’t leave it all until the last minute because you may run out of time to do absolutely everything!

What are my options with regards to Mobile Phones when I go to Spain?

I was on 3 UK and I got them to unlock my iPhone before I went so that I would be able to choose any tariff when I went to Spain and Italy. So I took my British iPhone with me (unlocked) and I chose t...