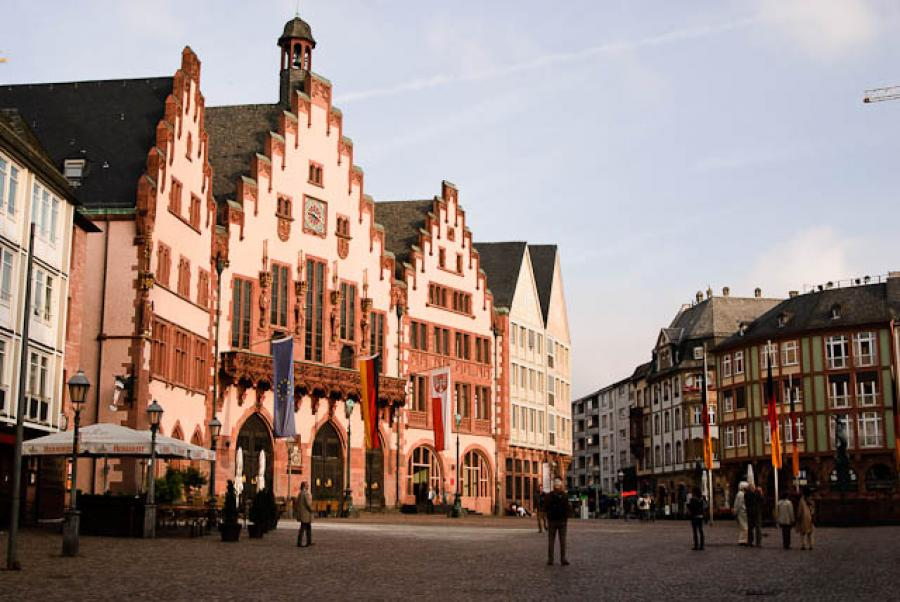 This article was written by Victoria Fenny, published on 16th April 2013 and has been read 4261 times.

Frankfurt German Mole Diaries Exeter Uni
Victoria is studying French and German at Exeter University. She spent the first semester of her year abroad in Frankfurt before moving to Dijon. Here are her top tips for making the most of your time in Frankfurt...

Be proactive about accommodation. Apply for Student halls, they are cheap and good value for money, but there aren’t nearly enough for all the incoming students in Frankfurt. If you miss out on student accommodation, go to Frankfurt and find something before you move out there! The people living in flats often ‘interview’ (for want of a better word) before they decided whether you can move in, and often if they haven’t met you, they won’t consider you, so taking a trip out there before you move there is definitely a good idea. I was advised by my University to turn up and find people to live with/somewhere to live when I arrived, but I wouldn't recommend doing this as I ended up in a very expensive WG miles away from Uni with a nightmare landlord and difficult housemates!

Be aware of hidden accommodation costs. Landlords can charge you a ‘provision’ (commission) which can be up to 2 months’ rent without bills, and you don’t get it back when you move out. I found that deposits were generally higher than those in England, so be aware of that (mine was €900!)

Don't be fooled by the German stereotype of punctuality and organisation. If you are heading to university in Frankfurt then it will be completely disorganised and seem like a bit of a shambles – don’t worry about this, it is all part of the experience and you will laugh about it when you leave! Also, although the public transport network is excellent in Frankfurt, the trams are rarely on time, so don’t count on that stereotype either!

Don't be alarmed if you get told off. People in Frankfurt tell each other off all the time and its completely normal, although I was slightly taken aback by being told off for crossing my legs on the Ubahn!

Take your passport with you everywhere for the first month or so you are there, for when you’re sorting out bureaucratic things. They want it for EVERYTHING (even a pay as you go SIM card) and they also seem to always want proof of address for everything too. My advice is to keep your passport and the document they give you when you register as a citizen on you – then all bases are covered!

Be slightly careful with money. Frankfurt is an expensive city, but if you are savvy about where you eat then it won’t bankrupt you. The university canteens are very reasonably priced (€1.20 for a coffee and around €3-4 for a meal) and there are plenty of reasonably prices restaurants – do your research and you will be fine! Clubbing is much more expensive, especially when you’re used to cheap entry and £1.50 Jaeger bombs! Entry is roughly €10 and drinks are at least €5 but normally more.

Discover the bar district – Sachsenhausen. There is a bar for everyone there, from sports bars to shots bars. There are also 2 Irish pubs, and when being abroad gets a bit much they are a great place to go. All the staff are English/Irish and they sell packets of Walkers crisps!

Don't take a taxi if you can avoid it. They are not particularly cheap and if you get a 7 seater taxi they immediately charge you more. My advice would be that if you finish your night before the transport starts again, head to the nearest McDonalds and grab a drink (or a full meal if you fancy!) they always have security guards so are a safe place to be

Try not to let people constantly speak to you in English. Everyone loves an opportunity to practise their English, I generally just ploughed on speaking in German – they get the hint eventually!

Enjoy it and make the most of Frankfurt and its surroundings! Frankfurt is a fantastic, modern, vibrant, multicultural city. It's not the prettiest, but it is great fun! Also, Frankfurt is in a very central location in Germany and it’s easy to travel to places (even if Deutsche Bahn makes national rail look punctual..!)